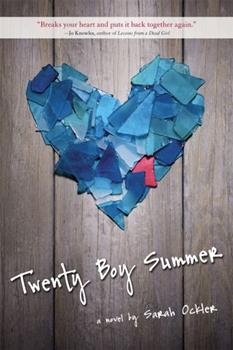 "Don't worry, Anna. I'll tell her, okay? Just let me think about the best way to do it." "Okay." "Promise me? Promise you won't say anything?" "Don't worry." I laughed. "It's our secret, right?" According to her best friend Frankie, twenty days in Zanzibar Bay is the perfect opportunity to have a summer fling, and if they meet one boy every day, there's a pretty good chance Anna will find her first summer romance. Anna lightheartedly agrees to the...

This is my fav book

Published by Amy , 2 years ago
Awesome
Published by Thriftbooks.com User , 3 years ago
Jeez. I love this book. I read this as a teenager, almost 10 years ago now. It was and always will be, one of my favorite books. There is so much true emotion and passion in this book. I remember my emotions at all levels while reading all those years ago.

Published by Thriftbooks.com User , 12 years ago
A year ago, Anna was best friends with Frankie and her brother Matt. However, the day before Frankie and Matt were planning to go on their annual trip to Zanzibar Bay, the three of them were involved in a car accident. The accident killed Matt. A year later, Frankie's family has planned another trip to Zanzibar Bay. This time, they are taking Anna. Frankie decided this would be a great way for Anna to have her first summer romance. They will meet twenty boys in Zanzibar Bay. Anna agrees, but she is hiding something from Frankie. Last summer, Anna and Matt had a romance... Twenty Boy Summer is a heartfelt novel that YA readers should not miss. From the beginning Ockler had me entranced in a story of grief and most importantly, moving on. Each character had their own way of grieving, and because of Ockler's writing, I was able to sympathize with all of them. The novel had a great balance between heartache and light-heartedness. Obviously, there's grief from the loss of Matt, but there's also light-heartedness from the beach setting. At Zanzibar Bay, Anna meets someone else she really likes. Ockler did a wonderful job describing Anna's worries about forgetting Matt, but also wanting to move on. Twenty Boy Summer is also a good story about friendship. Frankie and Anna have been neighbors and best friends since they were young, so as you can imagine, they have been through a lot together. However, this does not mean that their friendship was perfect. Anna and Matt never told Frankie about their relationship. They planned on telling her, but Matt's sudden death stopped this. A year later, and Anna still has not told Frankie. However, Frankie has some secrets of her own. All of this explodes into a big climax that will tear at heartstrings. Overall, an excellent debut novel, and I look forward to more by Sarah Ockler. Twenty Boy Summer is a great story about friendship and grief. This is perfect for anyone looking for a beach read with substance.

Published by Thriftbooks.com User , 12 years ago
This is the first YA book I have read since, well, I've been a YA, which is plenty long ago... Anyhow, I absolutely loved this book. Sarah Ockler has a wonderful voice and a great way with words. You can absolutely believe the characters and their conversations, and the tempo of the book never drags. It takes common subjects like friendship and death, and deals with them in an original way. I am eagerly anticipating Ockler's next book.

An insightful and funny story of discovery and love

Published by Thriftbooks.com User , 12 years ago
Anna's best friend Frankie is determined to make this summer their Absolute Best Summer Ever. To the outsider, it seems like it will be perfect: Frankie's family is taking Anna on their annual vacation to Zanzibar Bay, California and Frankie schemes to meet twenty different guys while they're there so she and Anna can have the perfect summer romance. But really, Anna and Frankie are still reeling from the loss of their best friend and Frankie's brother, Matt. And what Frankie doesn't know is that Anna's already had her perfect summer romance--with Matt. Though outwardly fun and flirty, below the surface Sarah Ockler's Twenty Boy Summer is a reflective and insightful story of loss and discovery as well. Ockler does an excellent job at characterizing each person in her novel, even the most insignificant characters, making Anna's world tangible and realistic. The different portrayals of each person's grief--Anna's retreat into her journal, Frankie's recklessness, and her mother's withdrawal--are all apt and serve as one of the most significant elements of the novel as it causes conflicts and also enables each character to grow. Ockler's simple use of juxtaposition is also a striking element, and is a detail that really stands out. Twenty Boy Summer is a fun-filled, romantic book containing every girl's dream summer vacation, but made more meaningful by the grief and sadness that Matt left behind. It's wonderfully detailed and sensitive as it exploes the bonds of friendship, first (and second) love, loss, and ultimately learning to let go. Twenty Boy Summer is a definite summer must-read. Cover Comments: Love, love this cover! It's so beachy and fun. The sea glass is a really nice touch that ties into the book, and I like the look of the boards that make up the background. I can just picture the beach whenever I look at it. Though the font of the title isn't my favorite, I like how the white stands out. This cover definitely gets my seal of approval!

Published by Thriftbooks.com User , 12 years ago
I adore this book! Twenty Boy Summer is a poignant, lyrical glimpse at friendship, loss, and the healing power of love. Ockler weaves her tale with lyricism and beauty, deftly creating characters that are imperfectly real and powerfully honest. A triumphant debut.
Copyright © 2020 Thriftbooks.com Terms of Use | Privacy Policy | Do Not Sell My Personal Information | Accessibility Statement
ThriftBooks® and the ThriftBooks® logo are registered trademarks of Thrift Books Global, LLC