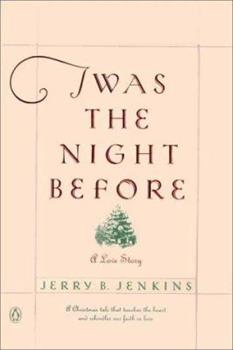 Twas the Night Before: A Love Story

by Jerry B. Jenkins

This description may be from another edition of this product. When it comes to Christmas, there are two categories of people in the world: believers and non-believers. Although non-believers will probably never get around to reading this love story by Jerry...

Published by Thriftbooks.com User , 19 years ago
I'm not sure this book was meant to be Hemingway, but if you want to read a touching, beautiful Christmas love story, this is it. I laughed, I cried (as did my wife), and I was almost cheering at the end. I can't believe I haven't seen more about this book! I heard about it from a friend, bought it, and now I'm telling everyone about it. PLEASE do yourself a favor and buy this book as soon as possible. I heard a rumor this was going to be a movie...if so, can't wait!!!

Get swept up in the Christmas Magic

Published by Thriftbooks.com User , 20 years ago
Okay, when Christmas comes around, most people think of the mob scene that is Christmas shopping. However, in this easy, fun, and over-much-too-soon read, the spirit and the miracle of Christmas can be lived. The story of Noella and Tom is destined to become a classic, even though I don't believe that it's well-know as of yet. Hopefully that will change. Anyway, this is truly a great read and I hope that you will enjoy it too.

A love story to renew your belief in Santa!

Published by Thriftbooks.com User , 21 years ago
This is a short book, but one of the most charming and magical Christmas books I've read in many a year! Taking place in Chicago, it's about two people who have quite differing views on the reality of Santa Claus, and how those beliefs pulls them apart and ultimately brings them back together again. I think it ranks right up there with O'Henry, and "Yes Virginia, there is a Santa Claus". An easy read that is over much too quickly and will become a book that's read every Christmas season. I fell in love with it! (And have sent copies as gifts to people ---- it's that good!)

Published by Thriftbooks.com User , 23 years ago
Northwestern University journalist professor Noella Wright invites highly regarded newspaper reporter Tom Douton to provide a lecture to her students. Cynical Tom, who champions the working class, refuses to step into the fantasy world of academia until Noella erodes away his reluctance.When they actually meet, he begins to fall in love with the rosy-colored professor, who is his diametrical opposite in outlook. Their relationship grows until Noella begins to wear a pendant that she insists was given to her as a child by Santa Claus. He refuses to be associated with an educated lunatic and ends their relationship. Needing an article for his part of the newspaper's annual Christmas edition, Tom flies to the Black Forest in Germany to learn more about the heritage of the holiday. His plane crashes and he is mysteriously rescued even as Noella is willing to suspend her beliefs in order for them to find happiness together.'TWAS THE NIGHT BEFORE may not be quite THE GIFT OF THE MAGI, but fans of seasonal romances will devour this interesting (though far-fetched) tale. The lead protagonists may be total opposites in perspective, but share much in common, which is why their relationship seems plausible. The story line is clearly and purposely a grand canyon of a stretch. However, fans of Yuletide romance who suspend reality for a few hours will simply enjoy Jerry B. Jenkins' fantasy love story that leaves no one left behind when it comes to feeling good. Harriet Klausner

I laughed and cried nonstop

Published by Thriftbooks.com User , 23 years ago
I have read an advance copy of this book, and it's one of the most heartwarming books I've ever read. Although the following phrase is a cliche, I really did "get swept away by the fantasy." The dialogue and treatment of the relationship of the main characters is realistic and romantic. This is in development as a tv movie--destined to become a classic.
Copyright © 2020 Thriftbooks.com Terms of Use | Privacy Policy | Do Not Sell My Personal Information | Accessibility Statement
ThriftBooks® and the ThriftBooks® logo are registered trademarks of Thrift Books Global, LLC