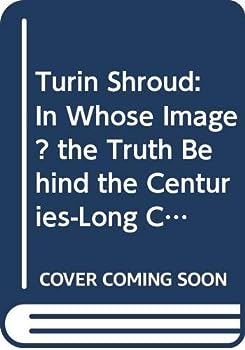 Turin Shroud: In Whose Image? the Truth Behind the Centuries-Long Conspiracy of Silence

by Clive Prince and Lynn Picknett

In this fully revised and updated edition, the bestselling authors of The Templar Revelation present new and compelling evidence linking Leonardo da Vinci with the forgery of Christianity's most... This description may be from another edition of this product.

The final say on the Shroud of Turin

Published by Thriftbooks.com User , 12 years ago
The definitive answer to the mystery of the Shroud. Every possible theory is exhaustively researched as to historical, political, scientific and common sense logical accuracy. Each theory is then weighed, analyzed and graded as to plausibility. Then, after every improbable explanation is eliminated, the only theory left, regardless how bizarre, must point to the truth. Da Vinci is revealed to be not only a visionary artist 500 years ahead of his time, the most innovative scientist of all time, the cleverist manipulator of the Catholic Church for his own benefit and the first of the progressive alchemists, but also intentionally planned that on the day when technology would reveal his hoax, his work would both put down Christianity and promote his Johanian beliefs at the same time. Brilliant! The book by nature has to be exhaustively detailed because of the nature of the subject and the parties involved. Determining the facts is not a simple matter, considering there are rabid fundamentalists having their most basic beliefs threatened on one side, and rabid athiest,conspiracy theorists countering on the other side. Fortunately, the authors have done their homework, including physically replicating the 500 year old methods used to pruduce such works of art and deception. Intense, disturbing, enlightening and radically logical, this book is not for the faint hearted but certainly well woth it for the truth seeker.

Published by Thriftbooks.com User , 17 years ago
This book is clever. The idea of a negative imprint is clever. The idea that Leonardo could have achieved this is entertaining, and that doesn't mean it's not true either. With it being "established" that Leonardo was a Grand Master of the Priory of Sion, this means irrespective of everything else he was involved in, the tie in with the Jesus mystery which the Priory is embroiled in is something to be aware of. Obviously its for the reader to draw their own conclusions, but like so many subjects that are often just "accepted on first hearing" as being correct, it always pays to see an alternate point of view! What's presented in this book is exactly that, and like a good complex equation it does add up, but then, just because 6 x 2 = 12, it doesn't mean that 3 x 4 can't give the same result!

Published by Thriftbooks.com User , 18 years ago
As an atheist I'm one of those that was satisfied after reading this book as far as accepting that the shroud is a fake and that Leonardo da Vinci produced it. In "A CONCISE HISTORY OF PHOTOGRAPHY," by Helmut Gernsheim, 3rd Rev. Ed. ©1965, '71, '86 - Dover Publications. On page 4 it says that da Vinci did camera obscura in late 1400s, early 1500s. In "PHOTOGRAPHY UNTIL NOW," by John Szarkowsky, The MOMA (Museum Of Modern Art) NY, ©1989 - Page 12, "...Given the intimate coherence of Western science during the four centuries between Brother Roger and Sir Francis, it seems likely that the basic principle of the camera obscura was fairly widely known;³ nevertheless no clear descripion of the phenomenon seems to predate that of Leonardo da Vinci, who about 1500 wrote: 'When the images of objects which are illuminated penetrate through a small hole into a very dark room, these images are received in the inside of the room on a white paper, situated some distance form the opening. You will see on the paper all these objects in their proper form and colour. They will be reduced in size, they will present themselves in a reversed position, owing to the intersection of the rays,4' Leonardo, however, ws so secretive a man that he wrote backward so it happened that Giovanni Battista della Porta, who described the camera obscura more than half a century after Leonardo, was long credited as its inventor." We have science to guide us, yet using science it has been proven that there is no historical Jesus and is clearly a human invention. The New Testament says that two clothes were used for Jesus, a body and a separate head cloth. Even though there is no evidence for Jesus, and the religious (christians, mainly) are ruled by the bible, they have to accept this and forget about the Turin shroud being the real thing. You can't have it both ways.

Very impressive, up to a point

Published by Thriftbooks.com User , 18 years ago
The authors give a very informative and entertaining survey of the known history of the Turin Shroud, as well as of the status of research, and of the various theories. They also give a very believable account of their confrontations with the "Shroudies" who want to prove the authenticity of the shroud at all costs. Moreover, they correctly emphasize that, even if the carbon dating tests have shown that the shroud can't have been made anywhere near the time of Jesus, the question remains as to how it was made.After reading this book - and checking the work by other researchers cited by them - there is no doubt in my mind that the Turin Shroud was made by a early photographic process. That is the only method that has allowed modern reproductions of the shroud to be made (not only by the authors of the book, whose work - as they admit - in this regard is amateurish, but by a photography specialist in South Africa). Those who insist on the Jacques de Molay theory overlook the fact that the authors of "The Second Messiah" also tried to reproduce the shroud - and failed miserably.Where the book starts to need more than a few pinches of salt is when they insist that Leonardo da Vinci was the faker of the shroud. They do give a lot of intriguing information about Leonardo, as well as circumstancial evidence, but I did raise my eyebrows when they introduced the mysterious "Giovanni" character who fist pointed the right way. Moreover, other books by the same authors indicate that they tend to move in the shadowy world of conspiracy theories and secret societies - which makes one suspicious. The same goes for the claim that the face on the Shroud is Leonardo's own, and that the intentionally had the face slightly separated from the body.I personally find it more likely that "head cut from the body" effect was due to a faulty composition, when the faker re-exposed the cloth to capture the face, which I believe to have been photographed separately - and rather than Leonardo, that possibly some today-forgotten artist was the faker.The Vatican should thank the authors, since, as they point out, should the Shroud turn out to be not only the oldest photograph in existence, but also by Leonardo, and his self-portrait, that would meant that it is the most priceless artifact on the planet.

This book deserves much more attention than it has gotten

Published by Thriftbooks.com User , 20 years ago
I read this book several years ago, having had no prior interest in the shroud, and found the presentation of how the image was made to be pretty reasonable and well-demonstrated. I am moved now to write this review because I recently read Second Messiah, which criticizes this book and which postulates that the image is that of a real human laid on the shroud, which I think cannot be true because, among other reasons, the image of the long hair of the back of the head would not run straight down the figure's back as it actually appears on the shroud; instead, as the body was laid down, the hair would first dangle to the cloth and then, as the head lowered to the cloth, the hair would crumple underneath the head, as anyone with long hair knows happens if you lie down after a shower. This book Turin Shroud describes a physical process involving a camera obscura and a primitive emulsion on the cloth, producing a photographic image. I can't speak to the Leonardo theory or the Priory of Sion material they include, since I don't follow nor much care about such conjectures. But that material even if wrong doesn't impeach the physical theory of image production. As to motivation, it seems reasonable that someone would try to create such a religious object as Christ's shroud, in order to attract pilgrims and donations, and may have stumbled on the process to create this image. There is another, long review on this site that goes into more detail -- I've read this review and I generally agree with its approach.
Trustpilot
Copyright © 2022 Thriftbooks.com Terms of Use | Privacy Policy | Do Not Sell or Share My Personal Information | Accessibility Statement
ThriftBooks® and the ThriftBooks® logo are registered trademarks of Thrift Books Global, LLC