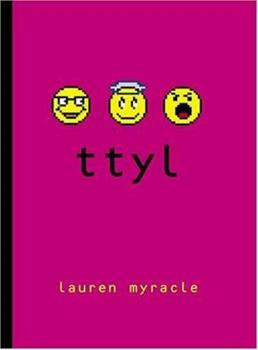 (Book #1 in the Internet Girls Series)

Published by Thriftbooks.com User , 14 years ago
TTYl by Lauren Myracle published in 2006 in New York, by Abrams books, $6.95. TTYL is an instant messaging, fantabulous teenage book that keeps a reader reading until they have read the whole book. I would rate this book a ***** because it relates to what I am today. I like TTYL because it uses words and phrases like brb, h/o, g2b, and ttyl. I also like it because it gets a lot of teenagers to read it. TTYL tells a lot about girls' and their difficulties in a sophmoore year. The main characters (Maddie, Zoey, and Angela) talk a lot about guys, family, personal problems, and boyfriends. TTYL is a great book and I incourage anyone no matter how old you are to read it. I gave TTYL a five star (*****) rating because it is just as I am a teenager with problems of boyfriends, and guys. I enjoyed this book and would read it again because it is a all around me book, and I would read it again and again. ~Debbie B.~

Published by Thriftbooks.com User , 15 years ago
Kristie Johnson TTYL Lauren Myracle Harry N. Abrams ©2004 205 Pages Are you into instant messaging, going to parties, talking about boys, and reading about other teenagers lives, if so then pick up this book and read it. Lauren Myracle tells the story of TTYL (means talk to you later for internet-speaking). She tells this story by only using instant messages between three friends. Angela whose screen name is SnowAngel, Maddie whose screen name is MadMaddie, and Zoe whose screen name is ZoeGirl. These three girls call themselves the "Winsome Threesome". They are just starting there sophomore year of high school, every night they all three get online and re-cap all of the events that happened during the day. This book takes place on the computer because it is all in instant messaging, but the girls talk about school, sports, gas stations, parties they have been too, and driving. Zoe is smart and fairly innocent, she is very dedicated to her schoolwork, and she is very interested when her twenty-four-year old English teacher starts to invite her to church and other church events. All Maddie wants is to be accepted by the preps (the popular kids). Maddie is very insecure about herself and she actively try to get the attention of the most popular girl in school, Jana. Angela is definitely the social butterfly out of the three. She hops from boyfriend to boyfriend and as always she's sure that the current guy is, "The one". Occasionally they are split apart by fights and misunderstandings but the three girls manage to stick together through all the fun times and the heartaches of high school life. This book includes discussions about sex, so I recommend this book to teenagers or adults. This book kept me up late at night, because I always wanted to know what would happen next so I would never stop reading. I'm really praying for a sequel of this book. This book is really trying to tell us that as we grow up, we learn that even the one person that wasn't supposed to let us down probably will. You'll have your heart broken probably more than once, and it's harder every time. You'll break hearts too, so remember how it felt when someone broke yours. You'll fight with your best friends and maybe even fall in love with them. You'll blame a new love for something that an old on did. You'll cry because time is passing too fast and you'll eventually lose someone close to you. So this book is telling you to take too many pictures, laugh too much, and love like you've never been hurt, because every sixty seconds you spend angry or upset is a minute of happiness you'll never get back.

A true to life book

Published by Thriftbooks.com User , 17 years ago
This book reminds me of the way my friends and I talk on MSN, emoticons included :) The use of asteriks to put those actions and the genius format make it a book that I absolutely loved and it is now nothing but a battered, loved to peices, torn in spots, dog-eared tome because I've lent it to so many friends that it looks 50 years older than it is! I love how the author stayed true to the form of teenaged chatting by not skimping on the topics and language used, and uses the shorthand of IM-land. My friends were shocked with the language used, so parents should stamp this book PG-13 (if it was a movie script, it'd be rated R *rolls eyes*) Anyways, Awesome book, I reccomend to all teenaged girls in Juinor High and above (13+) ttyl ;)

Published by Thriftbooks.com User , 17 years ago
I LOVED ttyl, I would definitely recommend it to any teenage girl that is into IMing. And now a days who isn't? Although it may seem a little odd by its look and the way it sounds it is really, don't let that scare you away, it is really worth reading. It is told through the IM conversations of three sophomore girls, Zoe, Maddie, and Angela. They tell all about the stress, humiliation, heartbreak and backstabbing that occurs in high school through gossipy IM conversations. This is an awesome book and it just proves that even through the most horrible of conditions, friendship can still be kept. Over all I would say that this is an easy book to fallow and I would recommend it to teenage girl eager for a good read.

Published by Thriftbooks.com User , 18 years ago
Lauren Myracle strikes again, with another fantastic novel! This book I have to say is one of my favorite books. This book hooks you 'till the last page. I read it in 3 days but I'm a slow reader so that's pretty fast for me. You'll never want to put this book down. All teenage girls can really relate to this book. TTYL is all about 3 highschool girls that are trying to make it through their first year. The 3 of them have been best friends since 7th grade. They have a really good, strong, bond with each other. This book not only talks about boys but it talks about stuff that can teach you a lot. I don't wan't to give the whole book away but one of the girls go to a party and gets drunk. You are gonna die because theres not a sequel. Oh ya, and the whole entire book is done in IM's so that makes it really fun. It;s really fun to put yourself in one of the girls position. You can totally relate to all of these girls in different ways. I totally recomend that you not only get it from your library but that you buy it. It's totally worth it. There is so much more that goes on in this book that i want to tell you but my guess is that you want to find it out for yourself. I hope that my review helped you.

ttyl Mentions in Our Blog