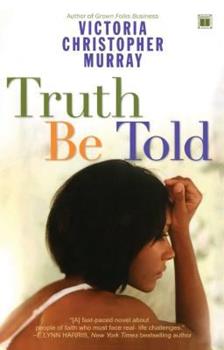 The author of Essence bestsellers Temptation and Joy returns with a story about one woman's personal and spiritual journey to overcome the consequences of her husband's dark secret. Grace Monroe has the ideal life: a devoted husband, adoring daughters, and a booming career in politics. Newly elected on a Christian platform to the Los Angeles city council, she is determined to put her mistakes behind her and focus on her bright future. But when a secret...

Published by Thriftbooks.com User , 16 years ago
I have read all of Victoria Chritopher Murray's books and they are all absolutely wonderful. I really love this book because it made me re-evaluate myself. Most women could not and would not be able to do what Grace Munore did. Would we totally lean and depend on God to work out the situation? This is a wonderfully written book and I recommend it highly!!!!!

Published by Thriftbooks.com User , 16 years ago
If we were to live according to our faith life would be drama and stress free. Faith is the substance of all things hoped for. Love, happiness, wealth, and health. But with a busy devil is that even possible? Not when our faith is tested constantly. Living by faith is far better than merely fulfilling rituals and rules. This can challenge us to grow in faith and to live in obedience to God each day. Conner and Grace Monroe have grown immensely from the undergrads they once were at Harvard. Though trials and tribulations set out to destroy their promising future. They decide to induct God into their lives. It's when they open themselves' to God's power that love seems to truly prevail. Conner finds out that his past transgressions have come to light. He's uncertain as to how his wife and family will handle this. Especially since Conner and Grace rededicated themselves to one another. They thought that they'd gotten past the hurdles. In 13 years he never saw a reason to detail his sins. But, that's the work of the devil. Always looking to expose you to vulnerability. It's how you utilize God's words in your heart that will turn your test into a testimony. While The Monroe's struggle to find a medium. The escalating drama seems to have a domino effect on other aspects of their lives. Graces more than Conner's. With Grace being in the limelight as a council member there appears to be scrutiny based on the fact that she's a Christian. This is a very inspirational read with real issues. Reviewed by Savvy Sista Shon

Published by Thriftbooks.com User , 16 years ago
Here we meet The Monroe's from Los Angeles, Grace and Conner. Grace is a newly elected councilwoman who's carefully being watched due to the fact that she's a Christian and used it as her platform. Grace has a number of ideas, one being returning prayer back inside public schools. Connor, who's a fraternal twin, has a successful law practice with his twin brother. The loving power-couple have two daughters Jayde, and Amber. As Grace starts to work on implementing her education programs, it appears that the past is rearing its ugly head. Before Grace found out what it was to be one of "God's Children", she'd been involved in and on and off extra marital affair with her first love. Through time, love, and God, Connor and Grace were able to reroute their bumpy road and "dance through their storms!" BUT as the clouds slowly clear another storm lies in wait.... People of faith face real problems! Connor's former assistant Pilar, who just one day disappeared, is back! As she reveals her reason for leaving, Connor has to face the fact that he's hidden his "OWN" demons from his marriage, and now it's time to reveal that secret, and deal with the consequences. As he searches for the words that might possibly destroy his family, Pilar constantly reminds him that there simply isn't enough time for him to adjust. As Grace tries dealing with her husband's news, she's saddled with her adversary Sara who's just searching for anything to show the constituents that she wasn't right for the job. Mabel; Grace's older and VERY competitive sister. She's a motivational speaker who has assumed the name Starlight. It appears that Starlight believes in the power of money, instead of the power of God. And then there is Jayde, their 15-year-old-teenager. Her attitude and behavior have Grace contemplating child abuse. Grace is slowly sinking in a never-ending bottom as she struggles with her faith as she's being tested in every way. Will the Monroe's survive and thrive these latest challenges? This is my first read by Victoria Christopher-Murray. My mother, and my "BESTESTEST" Lisa, are both fans and have read all of her previous work and the two of them consistently talked about how engaging this book was. How personal that it became. It's a very emotional read that truly electrifies you. This book is AWESOME! Keep God in the lead of your life!

The Secret That Won't Go Away

Published by Thriftbooks.com User , 17 years ago
Sometime it appears that when everything is going good and you are sitting on top of the world, watch out cause it can all come crashing down in a matter of minutes. For Grace Monroe, her husband Connor and her sister Starlight, this seems to be the case in Victoria Christopher Murray's new book, Truth Be Told. See how they turn to their Savior for guidance and strength during their trying times. Grace Monroe seems to have it all. She has two wonderful children and a loving husband. She has just been elected to the City Council of the 16th district. She ran her campaign on a Christian platform so she is obligated to live the Christian life, under much scrutiny. Her husband Connor is a successful lawyer and very supportive of his wife. Right after the election, and right before Connor and Grace are set for a romantic rendezvous, Connor receives a phone call that changes his life. In fact, the phone call changes the life of the Monroe family.. Mabel Morgan is the older sister of Grace. She has since childhood strived to be as good as Grace. On a chance meeting in a dentist office she encounters Dr. Carr, an inspirational speaker and best selling author. He teaches her everything to know about his business. When he suddenly dies, Mabel emerges as Starlight, an inspirational speaker and author; an icon for all women. For Starlight, it's all about making the money. Her goals are to become richer and more famous than the day before. She vows that nothing and nobody will get in the way of her making millions. Truth Be Told is classified as a Christian Fiction novel, but the issues these characters face are common to anyone. Murray is able to show how the characters hold on to their sanity during trying times by sprinkling scriptures and prayers throughout the story. The reader does not feel overburden by an abundance of sermonizing. This book captured me and kept me glued to my seat until the last page. I highly recommend this book whether you are looking for Christian fiction or not. Jeanette APOOO BookClubMotown Review Book Club

Christian Fiction at it's best!

Published by Thriftbooks.com User , 17 years ago
Ms. Murray has done it again. She weaves a tale of characters and situations that are true to life and happening in our own backyards! The author has a gift of writing "hurt scenes" that put you in the character's shoes and really make you feel their pain. Her characters are real people going through real situations looking for real solutions. This book gives hope to others that are dealing with chidren that result from marital affairs. It offers sound Biblical and sensical advice on marital and family values, and how to keep Christ FIRST. Bravo Ms. Murray.
Copyright © 2020 Thriftbooks.com Terms of Use | Privacy Policy | Do Not Sell My Personal Information | Accessibility Statement
ThriftBooks® and the ThriftBooks® logo are registered trademarks of Thrift Books Global, LLC