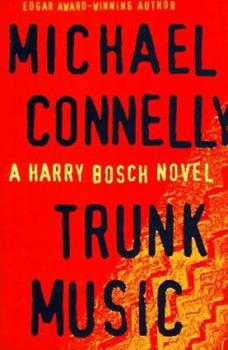 Back on the job after an involuntary leave of absence, LAPD homicide detective Harry Bosch is ready for a challenge. But his first case is a little more than he bargained for. It starts with the body of a Hollywood producer in the trunk of a Rolls-Royce, shot twice in the head at close range - what looks like "trunk music," a Mafia hit.But the LAPD's organized crime unit is curiously uninterested, and when Harry follows a trail of gambling debts to...

Published by Thriftbooks.com User , 20 years ago
If I were Harry Bosch, I think I'd get a job as a bouncer or something...the poor guy, he's at it again and he's up against more internal affairs investigations. There's one time in here in which his new chief, Grace Bittell, looks at him and says, "Harry, why don't you grow up and stop these pissing games?". Bravo, Grace.Now, don't get me wrong. Harry's still a great cop and he has a nose for finding out the details in snaring his criminals. Although in this one, he and his cohorts Kimz Rider and Jerry Edgar, blow it big time. But the new chief is a more intricate and understanding one than the previous Harvey Pounds.Anyway, in this multi-focused book, Bosch is up against the murderer of a small-time Hollywood producer who is killed in the trunk of his Rolls Royce and it looks like a mob hit. Of course, Harry is not so sure about it, so off her goes to Las Vegas to do more research. He stumbles upon a likely suspect in Luke Goshen, who is more than what he appears to be. Lo and behold, Harry also stumbles upon his former love, Eleanor Wish, who has spent five years in prison for her part in a nasty crime committed in an earlier work. So add this to Harry's problem and you've got quite a bit of trouble brewing.Connelly makes this work for him most of the time, although I tend to agree that the ending comes a little quicker than usual and even though we have an exciting climax in a little shopping mall, there's even one more little twist that Connelly tags on that's not really that exciting. However, there is a surprise for Harry at the end as far as his love life goes.All in all, you really can't go wrong with Harry Bosch or Connelly. He's a great writer and you can't help but fall in with Bosch and his bullheadedness...he gets the job done!!HIGHLY RECOMMENDED

Published by Thriftbooks.com User , 20 years ago
This was another strong effort from Connelly. Bosch, one of the most interesting and compelling crime stoppers in the genre, is a sort of Dirty Harry with an even darker side. Trunk Music has a strong plot with nice twists and plenty of surprises. As always, Connelly does a superb job at portraying that gray area between good guys and bad guys. Once again Bosch is being investigated by IAD, but the telling line of the novel is Bosch's: "Who polices the police who police the police?" Things wrap up a little too neatly at the end, but otherwise I highly recommend this book. I rank it a little behind some of Connelly's earlier novels, but it still stands out amongst today's best crime fiction.

Published by Thriftbooks.com User , 22 years ago
Harry Bosch has got to be one of my favourite characters! He is just a brilliant detective who says & does anything just to crack the case! Of course, he does get into trouble by his superiors but he always finds ways to get what he wants!Connelly has written yet another totally engaging and brilliant thriller that introduces the reader, once again, to Harry Bosch. This time Bosch and his crew and investigating the murder of a well-known Hollywood player. He is found in the back of his Rolls , murdered by what looks to be a Mafia hit - or is it? This brilliant novel never loses its way and twists and turns along the way, bringing the reader with it. Connelly is a superb writer that introduces novel ideas into all of his books & writes with passion and develops brilliant characters in all of his works.I never tire of reading anything by Connelly - truly one of the best crime novelists around!

Start at the beginning...

Published by Thriftbooks.com User , 24 years ago
Get your tax refund yet? Some money in the Christmas Club account at work? Have any old jewelry to pawn? Hit the lottery last week? Simple solution - spend your money reading Connelly's Harry Bosch stories. Buy them all, read 'em in order. Too many mystery authors rely either on stock characters so thin they could be cardboard cutouts or on their readers' fanatical devotion to their fictional "universe." Not Connelly - like P.D. James or James Lee Burke Connelly's lead character gradually evolves, gaining depth and substance in each new novel. Trunk Music finds him at the peak of his powers - a thrilling yet human story which a reader might devour in a single late night read, yet return to savor again and again. Connelly's work, like Ellroy or Moseley's, deserves a special place on your shelf at home.
Trustpilot
Copyright © 2022 Thriftbooks.com Terms of Use | Privacy Policy | Do Not Sell or Share My Personal Information | Accessibility Statement
ThriftBooks® and the ThriftBooks® logo are registered trademarks of Thrift Books Global, LLC