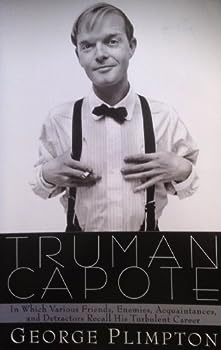 This description may be from another edition of this product. He was the most social of writers, and at the height of his career, he was the very nexus of the glamorous worlds of the arts, politics and society, a position best exemplified by his still legendary...

Published by Thriftbooks.com User , 15 years ago
I really liked this book. I am a Truman Capote fan, and the book was wonderful. A must read for Capote fans especially!

Published by Thriftbooks.com User , 16 years ago
I thoroughly enjoyed Plimpton's take on Capote, or rather Capote's friends and family's take on him. Seeing Capote from a hundred different viewpoints seems to distill something in his personality that was lost in other accounts and it seems only fitting that he who lived by gossip should be remembered in the same way.

A Full Life Full Of Gossip, Tragedy And Success!

Published by Thriftbooks.com User , 20 years ago
Plimpton does a great literary service in this collection of "gossip" so perfectly interwoven, one can't realize how much fun a hayride it is. Beginning with Capote's Southern family relationships and the odd upbringing he had, Plimpton portrays Capote as a willing oddball star. The early years are romatic and endearing. Capote's New York success is also portrayed in a whimsical, almost surreal fashion, showcasing the enormous success and easy high society friends Capote made. It is made clear that as talented as this flambouyant author was, he truly published little for his lifetime, a thorn in the side of his nemesis, Gore Vidal - a master of historic quantitative excess. Peaking with "In Cold Blood", Plimpton truly gets under the skin of Capote and reveals that this was his tormenting climax and one that he would never get over emotionally. The biography becomes desperate at this point with reasons I will not disclose here. However, the downward spiral continues, as Capote publishes "Answered Prayers", satiring all the friends that helped make him a New York socialite. Sinking into alcohol induced depression, Capote retreats to Joanna Carson's home in California to revel in his accompishments and defeats. A heartfelt but terribly depressing ending. Much kudos for Plimpton for bringing out the multitude of characters, comments and opinions from many sources and inter-twining them into a marvelous biography. It almost makes you wish you had a friend like Capote, almost.

"I'm beside myself!"--Gossipy and fun, yet oddly touching

Published by Thriftbooks.com User , 23 years ago
Though admitting it makes me seem like a walking example of "what's wrong with readers today," I have read more books *about* Truman Capote than I have read *by* Truman Capote. Not being a fan of "traditional" biographies, I was really looking forward to reading Plimpton's oral biography on this "tiny terror," and I was not disappointed. The book takes you through Capote's life, from his boyhood in Alabama (unlike some of my fellow Alabamians, I am more than happy to claim him as a product of the South) to his sad final hours in California. Say what you will about Capote, but the man "gave good quote," and his friends and enemies interviewed here seem to remember every one of them (and so will you). Whether you're interested in Capote (the writer), Capote (the jet-set sycophant), or Capote (the man who knew how to live life more fully than it was probably meant to be lived), you will thoroughly enjoy this book.
Copyright © 2020 Thriftbooks.com Terms of Use | Privacy Policy | Do Not Sell My Personal Information | Accessibility Statement
ThriftBooks® and the ThriftBooks® logo are registered trademarks of Thrift Books Global, LLC