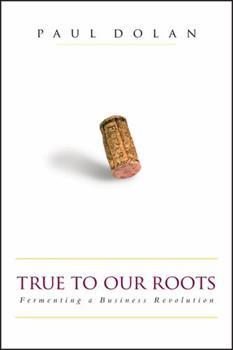 True to Our Roots: Fermenting a Business Revolution

True to Our Roots sets forth the simple but powerful management principles that enabled Fetzer Vineyards under Paul Dolan to become one of America's biggest and best-known wineries even as it was turning into a model for sustainable businesses everywhere. Today, Dolan and Fetzer are leading the California wine industry toward profound change in how wineries and grape growers preserve their environment, strengthen their communities, and enrich the...

Published by Thriftbooks.com User , 17 years ago
What could be more fitting than a recommendation for Paul Dolan's book, "True to Our Roots: Fermenting a Business Revolution"? Through this book, I became aware of Fetzer's attempt to reengineer the entire American wine industry along sustainable principles. A few quotes: "Fetzer Vineyards increased earnings an average of 15 percent a year through the 1990s, while keeping its environmental and social responsibilities as top priorities. Our experience proves that operating on a more sustainable basis is not an economic liability. If anything, we see sustainability as an economic asset and a competitive advantage." "A successful sustainable business... reaches out beyond the next four quarters, beyond the next five years, to consider what's ahead for the next generation. I is prosperous without being wasteful. It grows without mortgaging its future. It shares its discoveries without giving up its leadership. A successful business lives by its principles, and each new challenge is an opportunity to express those principles more fully, not abandon them conveniently." Taking a stand is different from taking a position. Gandhi did not take a position that the British salt laws were bad, or unfair, or illegal. They may have been all that, but he was not interested in taking a position about them. He wanted to end them. So he took a stand. There is a huge difference." (I wish I had space to reprint Dolan's vision of a sustainable society based on sustainable business. If you get the book, it's on pages 150-151.)

Published by Thriftbooks.com User , 18 years ago
True to Our Roots is a combination of one man's evolution as a leader and a case history of how to engage business in serving its stakeholders in more ways. This is one of the rare books I have read where a company has used environmentally friendly policies and practices to enhance its business performance on a sustained basis while influencing its industry to make the same kind of improvements. Any business leader can learn helpful lessons from this book.Mr. Dolan came to Fetzer as a winemaker and helped the company make great strides in that role. One day he had an epiphany. Tasting grapes to see if they were ready for harvest, he noted that the flavors were much richer in one section than in the next. They were the same type of grapes, grown in the same microclimate. What could be the difference? Then, he remembered that the better tasting grapes had been tended with organic farming practices while the less good tasting grapes at received conventional chemical fertilizers and pesticides. His conclusion: His customers deserved the better tasting grapes. From that epiphany, he began a life journey that has led him to becoming a new type of leader and one who hopes to influence everyone in the world.As a young man, Mr. Dolan was like many young people -- anxious to prove his worth. Working like a maniac, he wanted everyone to cater to his decisions and purpose. That kept people from becoming close to him, and led to the break-up of his first marriage. He later remarried one of the Fetzer daughters, and tried to cure his over-controlling nature. Eventually, he learned that he should listen to, encourage, and inspire other people to do what they thought was right . . . rather than expect blind compliance to his ideas. That shift made all the difference in his personal life, and to the business.One of the surprising things about this story is that Mr. Dolan made most of these changes after Fetzer had been acquired by Brown-Forman, the alcoholic beverages giant. It's even rarer to find such industry leadership innovations coming from the heart in a small division of a large public company. But Brown-Forman has encouraged the changes. No doubt the support was enhanced by the Fetzer company's extraordinary success . . . growing earnings by 15 percent a year -- a remarkable feat in the wine business. One of the interesting lessons of the change to environmentally friendly practices (called "sustainability" in the book) is that it drew on the preferences of employees to do the right thing, and provide higher quality. Most of the book is devoted to explaining the six principles of the company's management style (with one chapter for each). Your Business Is Part of a Much Larger System -- The focus here is to see the linkages between what you do and the effects on your stakeholders and those who are connected to them. For more on this kind of systems thinking, see The Fifth Discipline.Your Company's Culture Is Determined by the Conte

Sustainability and growth at Fetzer Vineyards

Published by Thriftbooks.com User , 18 years ago
You don't have to be in the wine business to have noticed the rise of Fetzer Vineyards over the last decade or so. As a Californian and a long time devotee of the vintner's art (as well as a consumer!) I can tell you that Fetzer makes six and seven dollar bottles of wine with the best of them, and their more expensive labels are outstanding. And maybe this has always been the case, but before Paul Dolan was picked to head up the company in 1992 most of us didn't know much about Fetzer Vineyards.In this candid memoir (and frankly, part manifesto) about corporate culture and responsibility, Dolan gives us some insight into how he was able to grow the company by more than fifteen percent a year as he shares with us his ideas about how businesses should be run in a time of dwindling and strained natural resources. Fundamentally he believes that "it's time for business, one of the most powerful forces on Earth, to become a positive force for change. We already know that we can create tremendous wealth and technological progress. The new possibility...is to preserve that progress and wealth for the generations to come." (p. 8) This is the mantra of "sustainability" which rewards employees as well as shareholders, customers as well as executives. For someone involved in viticulture this means sustaining the land as well, and for Dolan this means organic agriculture.But Dolan also wants to make a difference in a larger sense. He wants to win awards for environmental excellence (and he has) by filtering the winery's wastewater and using renewable energy for the winery. He especially wants to show the world how Fetzer is both an economic success and a leader in environment-friendly practices and community and worker relationships. His "green" credentials might be judged from this statement: "The true cost of a gallon of gas is not the price you pay at the pump. The true cost" includes "what it costs the earth when oil is extracted and the cost when some of its byproducts return to the atmosphere..." (p. 17)He also recognizes that "Nonrenewable resources are running out," and that "Nothing takes place in isolation." (p. 18) Would that more business leaders recognized these facts and acted appropriately.This is also a book about how to become an effective manager. Dolan describes how he learned to listen, to his employees, to his son, and how he learned to put aside preconceived ideas and realized that sometimes the problem was himself. He tells a story about an annoying person (to him) named Tracey and the clay model they were trying to make (pp. 81-83) and how his change in attitude (inspired by his competitive nature!) allowed them to be successful in their project, and how that led him to stop regarding his son as "My Son The Jerk" (p. 84). This impressed me because it is not easy being that honest in public and in print. Later he even tells of a boldfaced lie he told and of an environmental mistake he made.But Dolan can afford to reveal

More than just a "business" book!

Published by Thriftbooks.com User , 18 years ago
Paul shows how a big business can have a much bigger and healthier effect on society not just the company's bottom line. The integrity of Paul Dolan and Fetzer vineyards in their goal to be sustainable should inspire everyone.

Published by Thriftbooks.com User , 18 years ago
Paul Dolan's book is different from many of the other leadership books on the market in that he develops the "context" for leadership. His description of his own experiences allowed me to understand more about how great leadership is developed individually. This is not a recipe or formulaic book, but a well written, heart-felt attempt to appeal to our humanity while those of us charged with leadership lead.
Trustpilot
Copyright © 2022 Thriftbooks.com Terms of Use | Privacy Policy | Do Not Sell My Personal Information | Accessibility Statement
ThriftBooks® and the ThriftBooks® logo are registered trademarks of Thrift Books Global, LLC