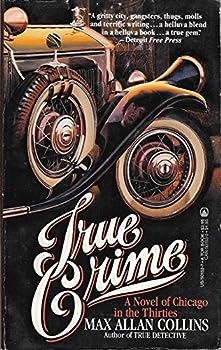 (Book #2 in the Nathan Heller Series)

An illustrated and informative history of the beginnings of organized crime as originally printed in the best-selling trading card set. This book contains all the art and the complete text of series one of the controversial trading cards.

Published by Thriftbooks.com User , 16 years ago
This is another entry in the Nate Heller series. After reading so many of the novels, he is like an old friend everyone wishes they had. Here is a character who has met socialized or shot it out with just about anybody who was anybody in the 30's, 40's and beyind. In this outing there are quite a few, including J. Edgar Hoover, Ma Barker and John Dillenger. The plot is tricky but well worth following. Be sure to read the notes at the end of the book to see what was factual and what was Collin's creation. If you ever saw an episode of the Untouchables or just the movie (or neither) read this. It won't let you down.

Published by Thriftbooks.com User , 16 years ago
In this, the second installment of Collins' Nitti trilogy, ex-Chicago cop, tough guy PI Nate Heller first finds himself on the periphery of the FBI hunt for Dillinger and then involved in a kidnapping plot with the Karpis gang in mid 1930's Chicago. The reader meets Purvis, Cowley and Hoover from the fledgling FBI, crooked East Chicago cop Martin Zarkovich, Baby Face Nelson, Pretty Boy Floyd, Ma Barker and her boys and the infamous Lady In "Red" Anna Sage, as well as Dillinger and Frank Nitti. Although the book meanders off track briefly towards the middle, Collins captures the perfect blend of history, supposition and fiction to bring these figures to life and provides enough mystery with Heller's clients to make True Crime a highly entertaining read.

Terrific continuation of the series begun with True Detective

Published by Thriftbooks.com User , 16 years ago
Max Allan Collins continues the Nate Heller series (begun with True Detective) with the second in the "Frank Nitti Trilogy." Taking place just months after the events in its predecessor, True Crime centers around the famous killing of gangster John Dillinger in front of Chicago's Biograph Theater (Manhattan Melodrama was the picture that he, a girlfriend, and the famous "Lady in Red" had just seen). Nate has just begun a relationship with renowned feather/bubble dancer Sally Rand, when a man comes into his office asking Heller to find his wife. How this connects with Dillinger and how Heller then gets mixed up with Pretty Boy Floyd, Baby Face Nelson, Ma Barker and her boys, and J. Edgar Hoover is a narrative of historic proportions. The accuracy of Collins' details and the amount of research done to get the facts right (sources are named in the back) are an example of the dedication Collins has to his craft. That he is able to whip up a plot that uses these, but does not rely on them for a crutch, while inserting a fictional character into the midst of the fracas, is nothing short of remarkable. True Crime is only the second Nathan Heller novel I've read, but it certainly won't be the last.

If only the history books in school were this fun to read!

Published by Thriftbooks.com User , 18 years ago
I love to read...but only fiction. I have never liked reading things about true to life people. But I loved reading about Nate Heller in this book as well as the book before this, True Detective. Mr. Collins has done an excellent job of telling the story of some of the nastiest criminals of the 30s but also by doing something others have failed to do. He has made the likes of Baby Face Nelson, Pretty Boy Floyd, Frank Nitti and the Barkers human. Although never once sugarcoating the fact that they were killers and whatnot, he gives us an idea of what they were in real life. Nate Heller is the perfect picture of the detectives of the era, tough, hard-boiled and not the kind to back down from a fight. But he is also a caring person and that is as evident as all of the other traits he shows. This book grabbed me from the beginning and held on to the end. Much better than just well written, it moves seemlessly from one event to another. Although crammed full with descriptions of actual happenings, buildings, people and more, Collins has integrated all of it together to where it is just as exciting to hear about Chicago's Loop district as it was to hear about John Dillinger's "death" outside the Biograph theater.Thank you Mr. Collins! I have loved these two and will be searching all of the rest of this series in the near future. If they are half as good as this one is, I am in for many hours of totally wonderful reading enjoyment!!!

Best of the Heller Novels

Published by Thriftbooks.com User , 22 years ago
I have read all of the Nate Heller mysteries, and True Crime is the best of them. One of the most interesting touches to the series are the historical photographs showing the characters that Nate interacts with. True Crime is a good straightfoward read which draws you into the criminal world of Dillinger, Floyd, Barker, Karpis and others. The historical research appears to be excellent, (I'm no expert) and Collins fleshes out all of the characters satisfactorily. If you can, read True Detective first as it gives a good background to Nate Heller (and is a very good book as well).
Trustpilot
Copyright © 2022 Thriftbooks.com Terms of Use | Privacy Policy | Do Not Sell My Personal Information | Accessibility Statement
ThriftBooks® and the ThriftBooks® logo are registered trademarks of Thrift Books Global, LLC