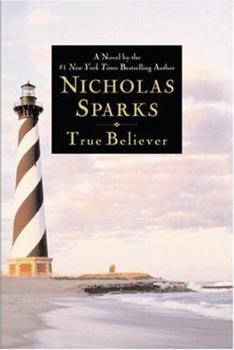 As a science journalist with a regular column in "Scientific American," Jeremy Marsh specializes in debunking the supernatural--until he falls in love with the granddaughter of the town psychic.

Published by Jenn A , 3 months ago
I just love how he always has us on the edge of tears when reading his books!

Worst Book ever written by Sparks.

Published by Bill , 5 months ago
This story was too slow to develope. It never got to the title - true believer. There was just no real story here. I jumped from chapter to chapter trying to find a story worth reading about - there never was. Maybe the WORST Nicholas Sparks book ever!

Published by Poole , 5 months ago
loved the thrilling part of the war

Published by Thriftbooks.com User , 16 years ago
True Believer is about a guy named Jeremy and a girl named Lexie. Jeremy is a journalist for New York. Jeremy is called down to Lexis's little town because the cemetery is suppose to have ghost in it and Jeremy is suppose to investigate it. While trying to figure out the mystery Jeremy falls for a girl, Lexie. But now after all this time the question is does Lexie love him? Lexie is the pride of the town and she runs the small library. Lexie has lived with her grandmother since she was a child. Her grandmother, Doris, is the owner of the restaurant called "Herbs" and is very popular along the town's people as well. Doris is the one who called Jeremy down to have a look at the cemetery and Doris doesn't believe that there are any ghosts. Jeremy has a feeling she is not the only one but would like the rest of the people to know there are no ghosts. As Jeremy researches more and more he finds out that Doris is not the only one that knows there are no ghosts but she was just the only one that let on that she knew. Now the question is who all knows? Was this just one big scam or was it his imagination? I like this book because it is like a mystery-romance type of book. It is like no other book I've ever read and it is really good. This book can not fit into any other category like the rest of the books can because it is like it s own thing. I would recommend this book to any girl no matter what type of book you like. I would have to say that anybody from teenagers to grandmas would have to say this is a good book and would enjoy reading it.

Published by Thriftbooks.com User , 16 years ago
This book is not like any other nicholas sparks book i've read. I heard it wasn't that good, but i still had to read it. it turns out that true believer and "at first sight" (the second-half to this one) are two of my favorite nicholas sparks books. he can't write them fast enough for me. get to work mr. sparks!!

Published by Thriftbooks.com User , 17 years ago
The novel True Believer by Nicholas Sparks has many literary devices which augment the readability and enjoyability of this work. There are many theme elements which serve to illustrate the point that Sparks is trying to convey. One of the major theme elements is that of the power of the supernatural and its ability to affect the lives of non-believers as well as believers. A novel regarding ghosts and demons and spirits has always been one that captures a reader's attention. It is interesting to read about strange encounters, especially in this day in age where it's not heard of often. Jeremy Marsh is the perfect character to play this role, a rock star who is also a journalist for a magazine that uncovers truths about myserious happenings. There exist many Science-Fiction novels today that were written long ago that have the same lure, but it really is different to read a story about haunted houses in a modern setting. Sparks doesn't take it too far, though. This is no "Constantine" in which the whole story seems too far-fetched to be true. The level to which this plot is taken also gives way for readers to accept it as realistic and a true possibility. Sparks has a way with taking something that seems illogical and making it into a truth or logic. Stories about the supernatural have been played out in the past as well, but Sparks knows just where to draw the line. A hilarious ending to the plot has also been added to relieve the reader of any awkwardness felt when reading about ghosts and demons. This theme was excellently done and well thought-out and it was truly a successful novel from cover to cover, and it deserves five stars.
Trustpilot
Copyright © 2022 Thriftbooks.com Terms of Use | Privacy Policy | Do Not Sell or Share My Personal Information | Accessibility Statement
ThriftBooks® and the ThriftBooks® logo are registered trademarks of Thrift Books Global, LLC