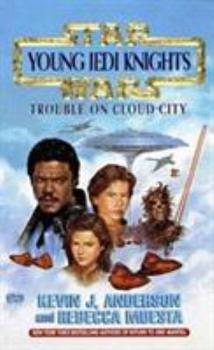 Lando Calrissian offer the twins a rare opportunity--a vacation on Cloud City. They jump at the chance, as long as their mysterious new friend Anja Gallandro can come along. Anja is happy to be... This description may be from another edition of this product.

Published by Thriftbooks.com User , 22 years ago
Well, I have to say that this was the best Young Jedi Knights book to come along in a while. Oh, but don't get me wrong, they're all good, but a few definitly stand above the others. Namely, Lightsabers, Jedi Under Siege, Jedi Bounty, and The Emperor's plague. And now Trouble on Cloud City has joined the ranks of the great. In this book, Lando askes Jacen, Jaina, Lowie, Tenel Ka, Anja, and Em Teedee to come with him to Cloud City to help supervise a new amusement park he is building there. When they get there however, they find that Lando's partner has been murdered, and they set out to find who did it. Anja knows of course, or at least guesses that her master Czethros is at work and she struggles on many moral points concerning her new friends, and her growing adiction to Andris Spice. Actually, in this book I found myself softening a bit towards Anja, who I previously hated. I still don't like her nearly as much as the other characters, but I began to realize that she is a victim is her own right, since it isn't her fault she was mislead and used and duped into Andris. Also, this book focused a lot on Tenel Ka, who is my favorite character in the series, and allowed us to get inside her, and see her thoughts and feelings in a way that has not been done since the masterpiece of Lightsabers. Her reaction when Jacen fell of Cloud City was heartbreaking, and I'll confess, that the scene where they all thought that they would never see him again almost had me in tears, and I never, EVER cry over books or movies or anything. I liked how this book let us see how much Tenel Ka truly cares about Jacen. Speaking of Jacen, his crush on Anja seems to have ended, which may in fact be what opened me up to her a bit, since I was always adamently against that. Anyway, I would recommend this series to any Star Wars fan, no matter what their age, even though they are generaly geared towards the 10-15 set. Also, this book would have a stronger effect on you and generally make more sense if you have read the previous twelve first, though if that is to much work, it is at least reccomeded that you read the one before it.

If you love Star Wars you will love this series!

Published by Thriftbooks.com User , 22 years ago
These are great books! This book is great for begginers. The story is great, the plot is great, it's very intriging. The book is about Jason, Jaina, and Tenel Ka, and Lobaca. Lando Calorisian is inviting the Young Jedi Knights to his Resort on Cloud City. The kids will come as long as they can bring their friend Anga Gilrado. But what they will find out is... You'll just have to read the book. It's a great book as a gift. It's a must for all Star Wars fans.

Published by Thriftbooks.com User , 23 years ago
I have always loved Star Wars. I was a little ifish about reading the books thinking it wouldn't be as good. How wrong was I. It was cool how Jacen fell off of Cloud City. A very nice touch.his return was also interesting. It was nice how Tenel Ka can be so different when in mourning over her thought to be dead friend. It made her seem more real. If you don't like this book you must be crazy! And that is a fact!

This is such a great book!

Published by Thriftbooks.com User , 24 years ago
I am so glad that Tenel Ka was finally forced to see how much Jacen really ment to her. The characters are getting more and more realistic, and I am really glad. Tenel Ka running to him after the little "accident" was a nice touch, sublime, and what a inferior author would have screamed at the top of their lungs. Keep up the good work!

This book was the best Jedi Knights book yet!

Published by Thriftbooks.com User , 24 years ago
In this one, Anja and the Jedi go to Cloud City, and something happens to Lando's friend and partner, Cojahn. The book is about how the young Jedi goabout solving it. It was completely suspenseful. I really thought Jacen was going to die. And it's about time that they admit Tenel Ka is in love with Jacen and vice versa. That's one of the main things I read the book for. Anyway , if you haven't readthis yet, then you're missing out on something REALLY great!
Trustpilot
Copyright © 2022 Thriftbooks.com Terms of Use | Privacy Policy | Do Not Sell My Personal Information | Cookie Preferences | Accessibility Statement
ThriftBooks® and the ThriftBooks® logo are registered trademarks of Thrift Books Global, LLC