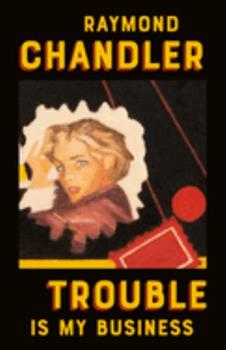 Trouble Is My Business

This collection by crime fiction master Raymond Chandler features four long stories in which private eye Philip Marlowe is hired to protect a rich old guy from a gold digger, runs afoul of crooked politicos, gets a line on some stolen jewels with a reward attached, and stumbles across a murder victim who may have been an extortionist.

Deja Vu For Chandler Fans, Excellent for All

Published by Thriftbooks.com User , 16 years ago
Chandler fans reading this book for the first time will have many "deja vu" moments. The book contains four of the twenty short stories written by Chandler in the 1930s that were warm ups for the seven novels that followed. Chandler wrote detective mystery stories, and became famous for seven novels and a number of Hollywood screen plays, mostly about crime and private detectives in the "film noir" genre of Hollywood black and white films, or what is called LA "pulp fiction". Far from being an ordinary writer of cheap crime stories, Chandler became one of America's best writers from the mid 20th century. Chandler was a Los Angeles accountant turned writer and he developed his own careful writing style. He started by first analysing other works, such as articles in the Black Mask mystery magazine. He used those stories plus local newspaper crime articles for plot ideas. He would set some of his stories in the fictional ocean side town of Bay City which is really Santa Monica, or set his stories in west Los Angeles, or other parts of southern California. He lived in Santa Monica after being fired from his oil executive job for drinking in the 1930s. He detested the place and moved into LA proper when he became wealthy as a screenplay writer in the early 1940s while working at Paramount. In the late 1940s he moved to La Jolla, just north of San Diego. Chandler started with short fiction pieces in the 1930s and then graduated to novels in 1938-39. From the early novels he was hired to write screen plays and eventually he wrote or created 59 works including stories, screenplays, and novels. His novels with the private Detective Phillip Marlowe brought him fame including the Bogart-Bacall movie The Big Sleep. This book contains four short stories each about 50 to 60 pages long from the 1930s. These are a warm ups to his seven novels and screenplays that followed. There are plot elements and prose that are almost a duplicate of some of the later novels. For example, the second story Finger Man has scenes and references that are almost directly inserted into The Big Sleep (1939) and Farwewell, My Lovely (1940). For Chandler lovers like myself, it is like eating chocolates to go back and be able to read these early works. Also Chandler has a four page introduction where he makes a number of comments on his writing style and philosophy at the front of the book. Trouble is my Business is the first of the four short stories. His career did not take off until after he had written three or four novels and started to do screenplays in the mid-1940s. He was lucky in that he was able to write the screenplays and make a lot of money. He became famous for the screenplays, but simultaneously, he rose to further fame by the growth in popularity of paperback books in the 1940s. As a result, millions of his Philip Marlowe detective novels were sold and after just a few years he had moved from a run down flat in Santa Monica to a large house with an ocean view beside

Published by Thriftbooks.com User , 19 years ago
Count Jason Ennis: You can find the rest of the stories from "Trouble is My Business" in the Chandler title "The Simple Art of Murder." That's another great collection of the master's work. Now that's a collection worthy of a bishop kicking a hole through a stained-glass window!" -- Dashiell Millar

The best of Raymond Chandler

Published by Thriftbooks.com User , 23 years ago
There are those who feel that The Big Sleep or Farewell My Lovely are Chandler's best work, but I disagree. As fine as they are, they were, after all, taken from his previously published short stories. Chandler was not a novelist, really. He was writer of scenes. He could spend paragraphs describing a room, or a person, or an open field, for that matter, and leave you begging for more. These four stories are the best he had to offer. Red Wind gets the most attention, usually, thanks to the classic opening paragraph, but my personal favorite is Goldfish. The character of Carol Donovan is the most exquisitely drawn hard-boiled female since Brigit O'Shaughnessy, and the finale is as good as the finale of Shane.

Published by Thriftbooks.com User , 24 years ago
Some of the stories are better than others. I liked the last one of the four, "Red Wind" the best. Chandler wrote amazingly vivid descriptions of people's minute physical actions, their appearances, and physical surroundings. He painted visually georgeous portraits of crooks, lowlifes, and detectives. His plots were complex, too. The Lady in the Lake is also a beautiful book. Very high body count in his books and vivid corpses, too. It's no wonder he's still popular. Certainly no movie could do his work justice.
Copyright © 2020 Thriftbooks.com Terms of Use | Privacy Policy | Do Not Sell My Personal Information | Accessibility Statement
ThriftBooks® and the ThriftBooks® logo are registered trademarks of Thrift Books Global, LLC