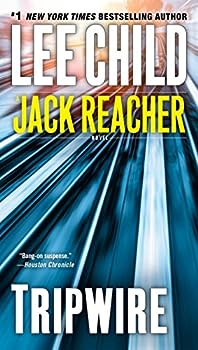 Jack Reacher hunts the hunter in the third novel in Lee Child's New York Times bestselling series. Ex military policeman Jack Reacher is enjoying the lazy anonymity of Key West when a stranger shows... This description may be from another edition of this product.

Published by Dana , 1 year ago
Of the whole lot, and I've read 'em, this one sticks out as my favorite. This is re-read; likely my third go at it. I lent my copy to someone and never saw it again. Quintessential Reacher in the mystery and figuring things out part. A little history lesson on our military and some insight on what a great guy Reacher is by the company he keeps. The first book, Killing Floor, was great, too. This one packs a punch and is less violent than the first - still has violence, though, cuz, you know, its Reacher.

Published by Nancy , 2 years ago
Very good book. If you like the Jack Reacher books, you'll like this one.

Published by Thriftbooks.com User , 14 years ago
I have read 11 of Lee Child's books and I can't wait for the next one to appear. Once you start reading you can't put the book down. My husband is a very slow reader, but not when he is reading Lee Child's books. I would recommend this to anyone that likes a good mystery, suspense or adventure book.

Published by Thriftbooks.com User , 16 years ago
Yup... completely and totally hooked... I just finished up the third installment in the Jack Reacher series by Lee Child... Tripwire. And they seem to keep getting better. Reacher, an ex-Army MP and drifter, is now in the Keys digging swimming pools by hand. No plan, no direction, it's just where he is at this point in time. His routine starts to crumble when two separate parties from New York show up looking for him, and he doesn't have a clue as to why they should need to know. He lies to both of them about who he is, and one of the individuals turns up dead a few hours later. Reacher decides his time in the Keys is up, and heads north to find out who's looking into his life. It ends up being the daughter of an Army general who was almost like Jack's dad. Running parallel to the story is another thread involving a CEO of a crumbling company and his attempts to keep it going by borrowing money from "Hook" Hobie, an amputee from the Vietnam war who takes great pleasure in using his prosthetic hook to inflict damage on those who do not pay up on time. Hobie is alerted that something from his past is starting to encroach on his current life, but he doesn't want to flee until he finishes the deal with the CEO. He also needs the daughter of the general that Reacher has hooked up with. Jack needs to keep the daughter safe, fulfill a promise to an elderly couple who's son is listed as missing in action, and figure out if he's ready to start settling down a bit... I think what I like most about this series is Reacher's "humanness". It's far too easy to paint a main character as some "can do no wrong" superhero who always makes the right decisions. While Reacher is definitely a force to be reckoned with, he's also like a large child who hasn't figured out how to live in today's society like everyone else. The writing is terse and the story is pretty tight, and the total convergence of all the plotlines doesn't happen until the very end. I was definitely unsure as to how it was all going to resolve, and I really couldn't put the book down. This is some of the best recreational reading I've had in a long time, and I'm glad I have another five or so books left in the series before I'm up to date. Highly recommended...

Again . . . the best writer you're not reading

Published by Thriftbooks.com User , 17 years ago
It would be interesting to see Mr. Child write something out of the Jack Reacher genre. Of course, there's always the response, 'why?' Here's Jack in Key West, doing what he says he always wants to do, drift, when he hooks up with an ex-cop from New York who gets dead after talking to Jack. And, as only Jack can, he wants to know why. You want to say, leave Jack. Go to Tahoe, Santa Monica, Santa Fe. But don't go looking for the 'why.' We like Jack because he is like Clint Eastwood, the man with no name. Most of the readers critical of 'Tripwire' are reading a book six years late. Of course there are changes. Try to get on a plane without a retinal scan. Life has changed since September 11. But Child is like DeMille. If you pick up The Cathedral or Charm School, obviously the boogie man is dead and life is different. But it's still damn good reading. Mr. Child might want to take a look at authors who left their money makers behind and tilled new soil (Dennis Lehane kissing Patrick and Angie goodbye) and those that didn't (John Sandford and Lucas Davenport in the Prey series) and decide owhere he wants to go from there. But in the meantime I'm a Jack Reacher fan and I'll read anything Mr. Child writes. Larry Scantlebury. 5 Stars.
Trustpilot
Copyright © 2022 Thriftbooks.com Terms of Use | Privacy Policy | Do Not Sell or Share My Personal Information | Accessibility Statement
ThriftBooks® and the ThriftBooks® logo are registered trademarks of Thrift Books Global, LLC