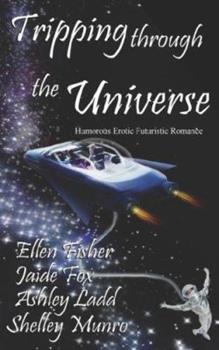 Tripping through the Universe

Take a romp into a future gone wild.... Boldly going where no woman has gone before, four women sift through the rubble of disaster in search of love and passion.... Farthest Space: The Wrath of Jan... This description may be from another edition of this product.

A fun trip through the universe

Published by Thriftbooks.com User , 16 years ago
FARTHEST SPACE: THE WRATH OF JAN by Ellen Fisher Captain Steven McNeill is captivated by his new Noo'dis't Communications Officer S'ansi. Having served five years with Steven, Science Officer Vaish was obsessed with her Captain; even if he is an ass. When their Alliances flagship is taken over by terrorists, the pair are dumped on a lonely planet...or so they thought! Ellen Fisher has written a fun space age story that really struck me as a cross between "Star Trek" and "Galaxy Quest". Steven needed an eye opener and ends up on an uninhabited planet...populated with enormous saber-tooth cats. Steven thinks he is the intergalactic gift to women, so I was surprised after only one day Vaish eased up on him. However they are faced with a mutual hidden attraction and the only two people on the planet. About the title: THE WRATH OF JAN, well Jan is one angry woman...she tried to take over the universe and was thwarted by our sexy captain -- as well as dumped on an uninhabited planet with 100 angry followers. So Jan is out for a little revenge. I greatly enjoyed the other novel I'd read by Ellen Fisher and this was not different. FARTHEST SPACE was a fun, sexy story that while campy and makes many cultural references, I found very enjoyable. ***** EARTH GIRLS AREN'T EASY by Jaide Fox Chyna Lin is a freedom fighter. Or at least she was until she is captured by the enemy and the planets ruler makes her an offer: go to prison or have his heir. Darion wants to create peace between the people, and taking Chyna as a concubine seems the perfect answer. However, like all alpha heroes, he doesn't really explain what he is truly trying to do. The story is appropriately titled, Chyna is a very determined woman. She falls hard for her gentle captor who is an exceptional lover but still feels the need to escape and return to her cause. This is the first story I've read by Jaide Fox so I have nothing to compare it with but WOW! With very graphic language, EARTH GIRLS AREN'T EASY is almost two giant sex scenes. I was impressed both with the emotions incorporated between Chyna and Darion and the fact that even though she is falling hard for him, she still tries to escape; twice, with very interesting results. While a little too racy for this reader, I did enjoy the story between Chyna and Darion and wish it had been a little longer. ***** FULLY FUNCTIONAL by Ashley Ladd Best friends Scott and Gregg have finally done it. They have built life-like robots with artificial intelligence and a "smart house" for them to live. After convincing Scott's little sister Shannon to test everything out, and against her better judgment, she moves into Greggs newly re-modeled house complete with a robotic maid, cook and sex crazed butler. This was an entertaining and very enjoyable read. Shannon and Gregg have mutual crushes on each other. This frazzles both of them because Rafael the butler is so intent on seducing a not interested Shannon. While the maid Myrtle seems t
Trustpilot
Copyright © 2022 Thriftbooks.com Terms of Use | Privacy Policy | Do Not Sell My Personal Information | Accessibility Statement
ThriftBooks® and the ThriftBooks® logo are registered trademarks of Thrift Books Global, LLC