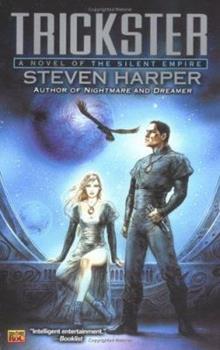 (Book #3 in the The Silent Empire Series)

In this third novel in Harper's critically-acclaimed Silent Empire saga, the telepathic communications net known as The Dream is shattered. But Kendi Weaver has more pressing concerns: finding the family that slavers tore from him more than a decade before. Original.

Published by Thriftbooks.com User , 12 years ago
The Silent communicate through the Dream, a telepathic communications network. Now tragedy has shattered it, and the few remaining Silent struggle to survive in a new universe. Meanwhile, Kendi Weaver has discovered the whereabouts of his brother and sister, long ago sold into slavery. He creates a risky, intricate con game to win them free. The Silent Empire series continues its powerful theme of family survival combined with breakneck plotting. The book never stops moving, and the characters are so well developed, they seem to breathe. And the tricks the characters play are truly fun read about. The con game in the alien brothel was by itself worth the price of the book.

A rescue mission against time

Published by Thriftbooks.com User , 13 years ago
Trickster, the third book in Steven Harper's Silent Empire series, is set shortly after the Despair, in which the majority of the Silent lost the ability to enter the Dream. During the turmoil of the Despair the presence of Kendi's brother and sister as well as Harenn's son was detected, and now they are on a mission to rescue them, but they have a limited time window in which to complete their mission. No sooner does Kendi discover the precise whereabouts of his brother and sister than the two are taken by a secret "cult" intent on using them for their own purposes. It will take all the cunning and ingenuity Kendi and his loyal crew can muster if they are to free them. Trickster maintains the same high level of suspense and imagination of the earlier books; and sustaining the human interest Harper further develops his main characters. Kendi is now promoted to Father, and his relationship with Ben is strengthened; but unfortunately we see almost nothing of Sejal. Purley as a matter of interest, there is a reference to the characters from The Catch Trap by Marion Zimmer Bradley, an all time favourite of mine. Like the previous books, this makes for a most pleasurable read, with an intricate plot and a few surprises and twists. I do feel though that the quality of the writing lapsed occasionally, especially when filling the reader in on information from previous stories, Harper's method lacked subtlety. Despite this it is a worthwhile and rewarding adventure.

Steven Harper... A legend in the making!!!

Published by Thriftbooks.com User , 17 years ago
When I read this book, I felt that there was a gap between Nightmare and this book. Kendi is a Father in the Childen of Ifran now, but in Nightmare he just started to get involved with them. Since the Despair being Silent is rare and Father Kendi is one of the well known heroes of the Despair. According to this novel 15 yrs had gone by. Character talked about the Despair and certain events that had happened. I was like huh....was there a novel called Despair. If there wasn't there should of been one. It just a little pet peeve of mine when authors leave huge gaps of time in between novels.I must say even though there was a huge gap it was still an interesting story. Father Kendi is captain of a ship called Poltergeist on the search for the scattered Silent, right now, mostly on the look out for his family. In this book, Father Kendi is more confident than who he was in the past. He and his crew work together like a well oiled machine and get the job done. Steven Harper created unique ways for the characters to overcome certain obsticles especially when, ironicly, time well spent in the chocate factory and in trying to obtain the port keys. I might say myself was pretty ingenius. The author has way of keeping your interest afloat and I can say there were no dull moments at all!!

Published by Thriftbooks.com User , 18 years ago
Slavery is common and legal on certain planets in the universe. The most valuable of all is the Silent because they can enter dreams and send communications as well as conduct commerce over several light years. When the Despair came and over ninety percent of the Silent could no longer enter the Dream, they become ever more valuable. The children of Irfar, a silent nomadic order, is trying to rescue as many of the lost silent as possible.Father Kendi Weaver, temporary captain of the spaceship Poltergeist, intends to rescue two of his family located on the planet Drin. Before he makes that attempt, he snatches his crewmate's son out of slavery. When they arrive on Drin, they discover his brother and sister have been kidnapped by a mega conglomeration Silent Acquisitions. Kendi and his crew have to figure out a way to rescue them, an almost impossible task but one that can be accomplished by those ready to risk everything on one roll of the dice.This is the third book in the Silent Empire series and it continues the stories of characters of the previous two books. Kendi and Ben are now a couple; Kareen has her son restored to her after her spouse sold him into slavery; and Kendi has a chance of reuniting with part of his family. All is not roses because Ben discovers his true biological heritage and unless someone can figure out a way of bringing the Silent back into the Dream, a futire civilization will cease to exist. Steven Harper is a genius when it comes to believable world building.Harriet Klausner
Copyright © 2020 Thriftbooks.com Terms of Use | Privacy Policy | Do Not Sell My Personal Information | Accessibility Statement
ThriftBooks® and the ThriftBooks® logo are registered trademarks of Thrift Books Global, LLC