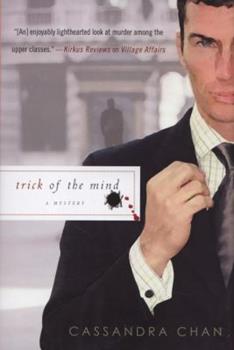 Trick of the Mind (Phillip Bethancourt and Jack Gibbons Mysteries)

(Book #3 in the Phillip Bethancourt and Jack Gibbons Mysteries Series)

Detective Sergeant Jack Gibbons can't remember how he got shot. While his colleagues dig into his personal life, his best friend Philip Bethancourt focuses on his last case, a robbery of antique jewelry. This is hardly surprising as, although Philip is a man of leisure, he makes a point of tagging along on Jack's more interesting cases.

Old favorites in an original installment

Published by Thriftbooks.com User , 13 years ago
Trick of the Mind (2008) is Cassandra Chan's third book in her Gibbons and Bethancourt mystery series (preceded by their debut in The Young Widow (2005), and Village Affairs (2006)). This book starts with the unthinkable. Detective Sergeant Jack Gibbons has been shot twice. Worse, no one knows why, least of all Jack who has no memory of the preceding events or the shooting itself. With mere fragments, Gibbons' best friend Philip Bethancourt and Chief Inspector Carmichael try to put together the events that led to this brutal attack. As the investigation leads to a seemingly unrelated jewel robbery and a dodgy London neighborhood, Bethancourt begins to wonder if any of the pieces will fall into place without Gibbons' own memories to connect things. Initially I was profoundly worried when I heard that Gibbons began this book by being shot. Was he being killed off? Would he go through the book in a coma? Would he be okay? (Gibbons is, incidentally, my favorite of the duo.) Upon actually reading the book, I was deeply relieved to have to these questions answered to my liking. Although Gibbons is necessarily on the sidelines for much of the action and investigation, he did play a key role. In fact, both Bethancourt and Carmichael spend a significant amount of time bemoaning Gibbons absence and the lack of his excellent investigative skills. After Bethancourt often taking the lead in the first two novels, it was nice to see Gibbons' role (and importance) acknowledged by the other characters. Although the case here is as intricate as in her earlier books, Chan spends a fair bit of time on characters here. Much of the novel offers a study of the friendship between her two protagonists--one that neither man is ashamed to admit is a close bond. Written in third person, this book also follows a lot of the characters around in the narrative. Almost anyone who has a piece of information about the shooting also gets a piece of the narrative. The structure is complex and fragmented, but works well with the general chaos of the first pages and the gaps in Gibbons' own memory. The design of this book is also different from earlier volumes in the series. The chapters here are shorter and always named (although not in a table of contents). The general span of the book also seems to take place over a shorter amount of time though that, to be fair, might be because of the urgency lent to the shooting case. These changes seem deliberate on Chan's part although I am still not sure to what end.

Published by Thriftbooks.com User , 13 years ago
I loved the first two in this series, and this did not disappoint. The two friends, Scotland Yard Detective Sergeant Jack Gibbons and his (apparently) independently wealthy side kick Phillip Bethancourt, both delightful personalities, are joined in tracking down stolen jewels by another interesting male figure -- a private detective specializing in tracking high-level jewel thieves. Ms Chan develops both her characters and her plot well, and I can't wait for the next in what I hope will be a long-running series.

Third in a most wonderful classic mystery series

Published by Thriftbooks.com User , 13 years ago
Trick of the Mind is a mystery novel by Cassandra Chan with an unlikely pair of detectives: Phillip Bethancourt, a man of independent means, and Jack Gibbons, an up-and-coming Sergeant. Phillip's outing in Paris is interrupted by a phone call telling him that his friend has been shot. Gibbon's colleagues and friends are shocked since such violence is rare in London. Unfortunately Gibbons is unable to remember anything that happened after reporting for work the morning of the shooting. While the police are following up to see what forensic evidence was left at the scene after the rain, Phillip tries to follow his friends' thinking about the case he was involved in. Jack had just been transferred to a different division from Homicide. He was investigating the theft of some heirloom jewelry from the estate of an old woman. Phillip meets the people involved to learn what it was that Gibbons had found out. Along the way he meets Gibbon's cousin and an insurance investigator and begins to piece together the missing hours. I found the characters of Gibbons and Bethancourt immediately engaging. Chan has created people who are original and likable. They interact like old friends. The sections that talk about Jack's time in the hospital are especially well done. She portrays the pain and frustration wonderfully, as well as the various reactions of the visitors. It is great to read a story in which someone is shot and actually takes time to heal. Even from his hospital, Gibbons is very much involved in the resolution of the case. This is the third book in the Gibbons and Bethancourt mysteries, and I will be looking for the first two. Armchair Interviews says: This is a great read for any who like classic mysteries.

Published by Thriftbooks.com User , 14 years ago
Affluent Phillip Bethancourt congratulates his best friend New Scotland Yard Detective Sergeant Jack Gibbons on his transfer into The Arts Theft Division after working homicides. In fact the pair worked a couple of cases together (see THE YOUNG WIDOW and VILLAGE AFFAIRS). However, his accolades turn sour when someone shoots Jack. Phillip assumes the shooting of his friend is tied to his new police work; most likely Jack's investigation into an antique jewelry robbery in which the detective sergeant was getting close to solving. As Jack slowly heals, Phillip quietly arranges with Police Detective Chief Inspector Carmichael to share information as the amateur sleuth makes inquires into who shot his friend and why. The key to this strong whodunit is that Jack is not running around town like a superhero, but instead is gradually recuperating from his wounds and is in no shape to search for clues; instead the collaboration is refreshed by Jack's boss working with Bethancourt. The investigation is fun to follow and a final twist adds a great climax to the strong story line. Readers will appreciate the inquiries as Phillip escorts the audience on a rare tour of a part of London that seemingly never appears in literature. Harriet Klausner
Trustpilot
Copyright © 2022 Thriftbooks.com Terms of Use | Privacy Policy | Do Not Sell My Personal Information | Accessibility Statement
ThriftBooks® and the ThriftBooks® logo are registered trademarks of Thrift Books Global, LLC