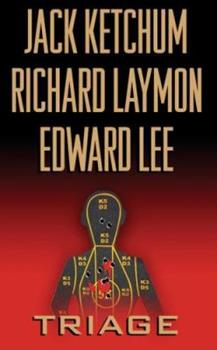 Three novellas by three of horror's greatest authors! Each novella begins with the setup of someone walking into a workplace with a gun. From there each author takes the story wherever his twisted imagination leads him.

Published by Thriftbooks.com User , 13 years ago
I only just recently found out that this book was released in paperback addition and that night I ran out and got it. I wasnt disappointed at all. Well, maybe just a tad disappointed. I didnt really enjoy the Edward Lee story. It was too long (the longest story of the three)and it was about themes that I dont care to read about (Christianity and Science Fiction) two themes that Im not really into. The other two stories by Richard Laymon and Jack Ketchum are superb and exactly what I expected. Laymons story "Triage" was the best only because Im a die hard Laymon fan and love anything he puts out. It has all the classic elements of a Laymon story. Extreme violence, rape, and of course revenge. Ketchums story although different was good too. It is about a guy who is pretty much down and out in every way than finally gets the recognition he's wanted but in a Very different way than what you think is going to happen. Overall if you like suspense and horror from 3 of the best out there than pick up this book. It is worth the price.

Published by Thriftbooks.com User , 13 years ago
I bought this book on a whim after seeing it at Barnes & Noble on a recent walk-through. What drew me to the book were two of the three authors on the cover. Richard Laymon was (he died in 2001) a great horror writer and Jack Ketchum is an author I have wanted to check out for a while. I knew nothing of Edward Lee. What enticed me to buy the book was the premise on the back cover: "A stranger walks into a place of businessc and starts shooting." This alone is not so special a premise, but as a beginning for three authors to expand on, this was really intriguing. So, the premise is this: Three authors challenge themselves to start with the same premise and see where it takes them. This I could not resist. Three novellas starting with the same premise and developed by three distinctly different and respected authors. Read the intro to the book to see that this was a project started years ago, and finally put together now after Richard Laymonfs family gave the OK. So howfd they do? Well, the first story is called "Triage" by Richard Laymon, and truth be told, it is pretty great. It has all the aspects of a great short story or novella. It hits you right away (I mean, the premise is "A stranger walks into a place of businessc and starts shooting"). And keeps on hitting you... again, again, and again, and then once again. This is 90 pages of wonderful rawness. You must read this. The second novella is called "In the Year of our Lord: 2202" by Edward Lee. This story starts with the exact same premise and continues to unfold into a strange and often bizarre science fiction story laden with a religious theme (not in a bad way) and a definite proclivity for sex. This is the longest of the stories and takes a bit to get into, but the story is pretty good and although I am not a big Sci-Fi fan, I was still engrossed by the ultimate story. And Mr. Lee did inject a good dose of the Horror spice. All in all, it was an entertaining story, albeit my least favorite of the three. The third story is hardly a novella. At only 40 pages, I would consider it a short story, but what a wallop it packs. As I stated earlier, Jack Ketchum is new to me, and now I'm hooked. This story was so good, I've already started Jack's first published book ("Off Season") as a follow up. His story, entitled "Sheep Meadow Story" pushes all the right buttons and the main charachter is so well developed (in only 40 pages!). This is a definite must read. It has it all and keeps you engaged with every word. Great trio of stories here. You should really enjoy them. -=R=-

Published by Thriftbooks.com User , 17 years ago
Excellent premise for a book with 3 novellas. Richard Laymon and Jack Ketchum write terrific stories and both should be highly rated. Edward Lee's story is the weakest of the group. As usual Richard Laymon goes for the straight forward punch, while Jack Ketchum gives us something a little different. This book is worth the money and it deserves a larger following.

Published by Thriftbooks.com User , 18 years ago
Triage gathers three of the leading lights of horror fiction, Jack Ketchum, Edward Lee, and the late Richard Laymon, under one cover for a hellacious trio of novellas all spun off of the same premise: A man walks into a place of business with a gun, and starts shooting.... Richard Laymon leads off with the title story, "Triage". He takes the most straightforward approach to the subject matter, with a grim tale of Sharon, a woman trapped in an office building with the madman who just killed all of her co-workers. Laymon hammers the reader with all manner of grotesque, twisted doings, so faint-hearted readers might want to give this a pass. The more daring reader will find Triage to be a fast-paced walk on the dark side; Laymon makes his heroine too real for this to be chalked up as mere exploitation. I actually had a few moments where I was afraid to find out what was going to happen to poor Sharon next....Now how many books have YOU read lately that got a reaction that visceral out of you..? Laymon was one hell of a writer, and I'm sorry I didn't discover him until after his untimely death. He left a great legacy behind, though.... Edward Lee's story also stars a heroine named Sharon, but his take on the subject couldn't be more different. "In The Year Of Our Lord: 2202" takes place in outer space, aboard a ship bound for a top-secret destination. Lee quickly gets away from the book's theme, and spins his story off in a totally different direction, effortlessly combining theology, sci-fi, and horror into a gripping, fast-paced tale. I'm generally not much of a Sci-Fi fan, so for Lee's story to grab me the way it did is really a neat trick. I was absolutely floored by the ending. This is a must-read. Last, but not least, is "Sheep Meadow Story", by Jack Ketchum. It's the shortest story, and although I liked it a lot, I thought it was the weakest one due to it's far-fetched ending. It's a more down-to-Earth story than it's companion pieces, but it manages to be funny, creepy, and touching all at once. Ketchum is clearly a VERY talented storyteller. The book is part of a limited-edition of 1500, signed by Ketchum & Lee, and Editor Matt Johnson. (Richard Laymon passed away before publication.) As you would expect from the always dependable publisher, Cemetery Dance, the book is just gorgeous. The only problem is this: Stories of this caliber deserve to be seen by more people than this limited-edition could possibly reach. In a perfect world, these three Authors would be topping the best-seller list....

Published by Thriftbooks.com User , 19 years ago
A woman sits alone at her desk, waiting for her shift to end, when her telephone rings. She hears a man whisper the words: "I'm coming to get you!" Seconds later, a man enters her work palce, holding on to a gun. This is how the three stories of Triage begin. But what follows this differs greatly from one story to the next. The three masters of independent horror - Lee, Ketchum and the late Richard Laymon - each tell their own take based on this scenario.Laymon's tale is dark and disturbing; the story becomes a race for survival as the killer chases after the heroine as she tries to find a place to hide in the building where she works. Lee's take, although fun and different, is a bit over the top and a little too long. He decided to bring his story to the year 2220 and sets in a a spaceship that just happens to be on a Godly misison.The real reason to get this book is for Ketchum's take, which is called 'Sheep Meadow Story'. It takes the reader through a very realistic nightmare, where a down-on-his-luck man tries to make sense out of his disturbed existence. This story alone is well worth the price of the book. Another great story from an amazing, underrated writer.This book is a great one for any horror fans. It has it all! I was greatly pleased by it and I know this is one book which I'll want to read again and again.
Copyright © 2020 Thriftbooks.com Terms of Use | Privacy Policy | Do Not Sell My Personal Information | Accessibility Statement
ThriftBooks® and the ThriftBooks® logo are registered trademarks of Thrift Books Global, LLC