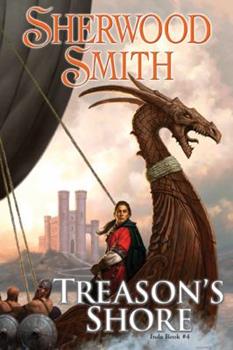 Fourth in "an intense fascinating epic"* of high action and fantasy adventure. Inda, fresh from his triumph on the battlefield against the Venn, takes his place beside King Evred as Harskialdna, the King's Shield. But the Venn are far from defeated and only Inda's fame is strong enough to inspire all the squabbling kingdoms to unite and raise a force mighty enough to protect the strait and repel the enemy. Evred has also ordered Inda to take over...

Published by Thriftbooks.com User , 12 years ago
I loved all of these books. I think these should be made into a video game. Well worth reading more than once.

Published by Thriftbooks.com User , 12 years ago
TREASON'S SHORE is the rich and satisfying conclusion to the epic fantasy Inda quartet. It is totally recommended that a reader start at the beginning rather than jump in with this book. Exiled from his homeland when little more than a child, Inda has grown into a brilliant military strategist. Upon his return home he was appointed as the Shield Arm to his childhood friend, Evred, now king. They faced a horrific battle against the invading might of the Venn Empire... and survived. The Venn withdraw, having internal problems of their own, but the threat they pose is still in place. Inda has some little breathing space to try and become reacquainted with the life he left years ago. There are also friends and enemies and political and personal machinations that continue to operate beyond the borders of his kingdom. The myriad people and places that have figured in Inda's life have destinies that need to be sorted out even as Inda's own future is determined. Naturally, the respite from death and danger for them all is brief and Inda is again called into action to try and save not only his country, but those lands and people bordering and buffering it, from the relentless return of the Venn. Inda needs to call upon all his knowledge, experience, and relationships if he even has a hope of success against the overwhelming forces against him. Those who have been caught up in Inda's adventures will find this last book a must-read, full of the detail of many fascinating characters and many lands and societies that have been maintained throughout the entire wonderfully long and rewarding series.

A good ending to a good yarn!

Published by Thriftbooks.com User , 12 years ago
I feel this book does a good job of wrapping up a complex plot without too many contrivances. The characters are consistent and the ending statisfies the desire to know how this all plays out.

Published by Thriftbooks.com User , 13 years ago
Prince Indevan-Dal has regained his honor having warned his country of the Venn invasion and led the defeat of the enemy. He remains in the capital after years of exile and does his duty by pledging his allegiance to the ruler Evred and marrying Tdor although his lover when he lived at sea, the sorceress Dag Signi is unhappy with her relegated status. Meanwhile the Venn war fleet returns home to recuperate. Commander Durasnir and his wife Brun hope the foolish youthful monarch Rajnir gives them and their sailors a respite; but fear the real ruler behind the throne Dag Erkric will not allow such. Their trepidation proves correct when Erkric abducts his ten year old son to use as a hostage. There is also a Blood Hunt directed at Signi, who is captured. The Venn are preparing for a second invasion but who shall lead the opposition Inda or Elgar the Fox becomes a controversial distraction. The fantastic fourth and final Inda fantasy (see INDA, THE FOX and KING'S SHIELD) is a super ending to an excellent saga as the prime characters constantly must choose between personal desires and kingdom needs. The choices are not easy as loyalty to a king may prove treasonous to a kingdom. Complex with thriving cultures on land and at sea, TREASON'S SHORE completes one of the best fantasy chronicles in years as fans will want to visit the realm of stupendous Sherwood Smith; recommend starting at the beginning to better understand the motives of the prime time players. Harriet Klausner
Trustpilot
Copyright © 2022 Thriftbooks.com Terms of Use | Privacy Policy | Do Not Sell or Share My Personal Information | Accessibility Statement
ThriftBooks® and the ThriftBooks® logo are registered trademarks of Thrift Books Global, LLC