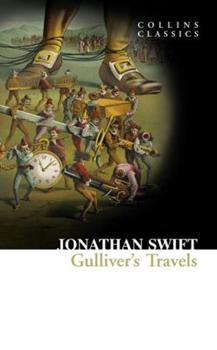 HarperCollins is proud to present its new range of best-loved, essential classics. 'I cannot but conclude the bulk of your natives to be the most pernicious race of little odious vermin that nature ever suffered to crawl upon the surface of the earth.' Shipwrecked on the high seas, Lemuel Gulliver finds himself washed up on the strange island of Lilliput, a land inhabited by quarrelsome miniature people. On his travels he continues to meet others...

Published by ryvaut , 1 year ago
Gulliver’s Travels details the voyages of Lemuel Gulliver. First he arrives in Lilliput where he discovers miniature world in which he towers over the people and their city. This is the source of the iconic image of him being tied to the ground. As a giant, he is able to see their society from the viewpoint of a god. Soon afterwards, he arrives in Brobdingnag where he is dwarfed by the giants there. Gulliver himself is now the curiosity that comes under observation. The word Brobdingnagian stems from this story. He also travels to Laputa, a flying island hosting a population that has lost its grip on everyday reality; Finally he visits the Houyhnhnms, a species of sentient horses that exude civility in contrast with the filthy humanoid Yahoos. True to the writing of Jonathan Swift, this book is really a satirical look on our own society- or at least the one that existed in 1726 (which has a striking amount of similarities to 2020). The book beautifully translates this satire into an exciting adventure story, filled with vivid imagery and an imaginative new reality. This 250 year old novel still had me flipping eagerly through the pages. The narration in the audio version is great, but bear in mind that some of the language can be challenging to grasp.

A great text that will live on for centuries

Published by Thriftbooks.com User , 15 years ago
Swift's Gulliver's Travels is one of the smartest British novels ever written. It is a funny, sharp, poignant, and startling look at human nature. The most interesting part of the novel is the many conversations between Gulliver and the Houyhnhnm master relating to the causes of war and other aspects of human nature. This novel is a wonderful reflection of human society that really makes the reader question his or her methods or discourse.

Published by Thriftbooks.com User , 20 years ago
Asimov does his typically thorough job of annotating, filling this book with tons of information about obscure references and historical tidbits. However, I was a bit dismayed at Asimov's heavy-handed critique of Swift in the 3rd book. As many readers of Swift know, the 3rd book contains a very harsh criticism of science and technology. Asimov decides to use his annotations to defend science. While his aims are certainly admirable, I think that he takes Swift's comments out of context in an effort to prove his own case.That minor cavil aside, this is an excellent book for young people studying this great classic of literature, and for fans of both Swift and Asimov.

Published by Thriftbooks.com User , 21 years ago
GULLIVER'S TRAVELS can be looked at in at least two different ways. On a stand alone basis, it is a satire written by a misanthrope, but if taken within the context of his overall body of work, it can also be perceived as a satire written by a man with a deep concern for mankind.Part I and Part II satirize Englishmen, their religion, politics, and their government. Parts III and IV satirize humanity on a much broader scale.In Part I, we find Lemuel Gulliver shipwrecked on the Island of Lilliput where the average inhabitant is about six inches tall. They are actually small in both body and mind. English religion and politics are satirized by descriptions of those who wear high heels and those who wear low heels, and by the dispute between those who feel their eggs should be broken at the big end and those whose preference is the small end. Like England, through much of history, the Lilliputians are constantly at war with their traditional enemies from across the chanel.In Part II, Gulliver is again stranded, this time on Brobdingnag, where the size proportions are just the opposite as in Part I. Here, Gulliver is tiny in relation to the inhabitants. Here, too, England, and to some extent all of humankind, are taken to task. After Gulliver has described European manners, customs, and behaviour to the king, the king comments that "I cannot but conclude (that) the bulk of your natives (are) the most pernicious race of odious vermin . . . . to crawl on the face of the earth."Part III takes on the world of scientists, philosophers, historians, and "projectors." On the flying Island of Laputa, the continent of Lagado, and the Islands of the Sorcerers and Immortals, He meets wise men who spend their lives in speculation but can't handle the practical necessities of life, professors who dedicate their lives to extracting sunlight from cucumbers, and immortals who reveal history to be nothing more than a series of deceptions.Finally, in Part IV, he finds himself in the country of the Houyhnhnms, who are horses with the power to reason. These horses lead clean and simple lives in contrast to the humans, known as Yahoos, who are filthy, brutal, and uncouth. In the Yahoos, Gulliver recognizes the human race, and after finally returning home, he can never again be comfortable in the company of other humans.Read by itself, GULLIVER'S TRAVELS is a satire on the foibles, weaknesses, and petty corruptions of the human race in general, and English politicians in specific, as written by a rather bitter misanthrope. That is a correct reading, but not necessarily the only one. Read in the context of many of Swift's other works, particularly his many political pamphlets, I think that it can be perceived as a satirically inventive work written by a man who really cares about the future of the human race.As an aside, Gulliver's visit to Lilliput has, through the years, enchanted countless numbers of children. It is in this section that we get a peek at

Gulliver's Travels into Several Remote Nations of the World. In Four Parts. By Lemuel Gulliver, First a Surgeon, and then a Captain of Several Ships Mentions in Our Blog