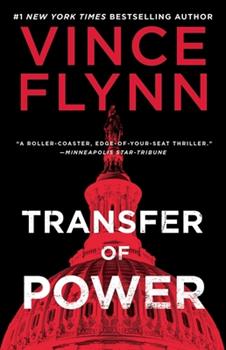 (Book #3 in the Mitch Rapp Series)

This "roller-coaster, edge-of-your-seat thriller" (Star-Tribune, Minneapolis) in the #1 New York Times bestselling Mitch Rapp series follows the CIA's top operative as he must stop a massacre in Washington, DC, and save the president before terrorists reach the White House. The stately calm of a Washington morning is shattered when a group of terrorists descends, killing dozens and taking nearly one hundred hostages as they try to infiltrate the White...

Published by Transfer of Power , 1 year ago
Some of the pages were torn & you couldn't read them.

You will LOVE this book!

Published by Randy Bowden , 2 years ago
Mitch Rapp on the home front. The man can do it, anywhere in the world! Vince Flynn's character has pretty much taken over my reading this year as I have all 18 (so far) of the Mitch Rapp books. The man is a super hero in all aspects of the term, even though he prefers to fly "under the radar." The term "can't put this book down" is over-used; however, for me, it definitely does apply to all of Mr. Flynn's Mitch Rapp books. Not always for the faint of heart, but if you enjoy behind-the-scenes action of things our government doesn't want you to know about, these books are for you. Supremely entertaining!

Vince Flynn is a total master of the political thriller

Published by Thriftbooks.com User , 16 years ago
I've recently discovered Vince Flynn and his Mitch Rapp character. This is my third Mitch Rapp novel and my conclusion is that Vince Flynn is the leader of the pack when it comes to political thrillers. He has no close competition. Mitch Rapp is a member of the Orion Team, a super-secret group with deniable connections to the CIA, White House and Congress. It's purpose is to eliminate terrorist threats to the United States without regard for anything but the danger they represent. Mitch Rapp is an "ordinary" guy, dedicated to extinguishing the terrorist threat without the messiness or hindrance of law. Find 'em, kill 'em and move on to the next one. Rapp is without a doubt the coolest super-hero to come down the pike in a long time. He has the freshness of the first incarnation of Clancy's Jack Ryan, the inventiveness of Clive Cussler's heroes and the philosophical bent of Barry Eisler's John Rain, who is the closest to Flynn's Mitch Rapp. Flynn's take on politicians is devestating. He beautifully skewers the Democrats and their "peace at any price" acolytes. He sets up Robert Hayes as a "centrist" Democratic President. Hayes resembles no Democratic President of the past century. He is a reasonable, intelligent man without a radical political agenda. Surrounding him, however, are the products of Flynn's literary - and I do mean literary - genius. Venal, greedy, ignorant men and women of his party who put their own selfish interests far ahead of the nation; people who would prefer to live under the heel of the enemies of freedom rather than resist. In "Transfer of Power," the chair of the Democratic National Committee has accepted a $500,000 "donation" in return for arranging a last-minute meeting between the donor, supposedly a Prince of Oman, and the President. President Hayes' chief of staff doesn't bother with the Secret Service security rules. After all, it is a donation of $500,000. As the "Prince" is about to murder the President in the Oval Office, the Secret Service receives a call from Mitch Rapp who has just abducted a top Hezbollah leader in Iran. Under intensive interrogation, Rapp has learned that the White House is to be the target of a terrorist attack this very day. The President is saved for the moment with only seconds to spare. The "Prince," really a ruthless terrorist Rapp has been tracking for years, then proceeds to take over the White House. The attack relies heavily on information gleaned from another Democrat. Almost a hundred hostages are taken. The Vice President assumes exeuctive power while the President is trapped incommuicado in a White House bunker. The White House is in control of the terrorists, its perimeter ringed with explosives. The terrorist leader makes a demand: release the Iranian billions siezed during the Carter-era hostage crisis or he will murder one hostage per hour. Transfer the money and he will let some hostages go. The Vice President, a cowardly, but ambitious politician, takes

Published by Thriftbooks.com User , 18 years ago
I picked this book up because the title sounded interesting. I have never read a book by Flynn before so I wasn't sure what to expect. I read this book in two days. I simply couldn't put it down. Rapp was a very entertaining character to read about. And with the current situation with Iraq and religious extremists the book seemed even more real. The book was very suspenseful and left you wanting more when it was over. I look forward to reading other Flynn novels.

Published by Thriftbooks.com User , 19 years ago
"Transfer of Power" by Vince Flynn is an exceptionally well written, well paced action novel that is literally impossible to put down. "Can't put it down" is one of the most overused cliches in publishing but in this case it happens to be true. I devoured it in a handful of sittings. Rarely have I enjoyed a political thriller more. The plot, which in a post September 11 world takes on new significance, involves the capture of the White House by a group of Middle Eastern terrorists and the efforts made to take back the presidential mansion. What comes in between is enough political intrigue and special forces action to satisfy even the most jaded of techno thriller fans. My only criticism is that the character's that populate Flynn's book are a fairly standard lot for his type of novel. The protagonist of "ToP" Mitch Rapp, while a very engaging and likable character, is nearly indistinguishable from Tom Clancy's John Clark or Jack Ryan or any of the other black ops super spy's that are so common in this genre. Other character's suffer from the same sense of familiarity. The exception being the villain. Terrorist mastermind Rafique Aziz is a very well crafted foe for agent Rapp and is one the reasons the novel is so entertaining. I should note that while the characters are fairly standard I still found myself making a significant emotional connection with themIt's minor character flaws aside "Transfer of Power" is an example of the political/techno thriller at it's finest. It moves at lighting speed with not a single wasted page or sentence and packs a number of very satisfying moments. I highly recommend it!

Published by Thriftbooks.com User , 21 years ago
Vince Flynn has followed up his highly successful and highly captivating "Term Limits" with another action packed, edge-of-your-seat thriller, "Transfer of Power."Flynn explores the nail biting situations in and out of the White House when it is taken over by an extremely intelligent Middle Eastern terrorist. The president's Secret Service agents manage to hide him in a bunker beneath the oval office, but a top-notch safe cracker is working for the terrorists round the clock to open the vault. With the seconds ticking painfully away, the country's only hope is that Special Op's man, Mitch Rapp code name: Ironman, with the aid of a retired Secret Service agent, can thread his way through the secret passageways of the White House and rescue the president before the terrorists get to him.Vince Flynn is a masterful author who weaves suspense, humor and action throughout every chapter. If you like Robert Ludlum and/or Tom Clancy, you will absolutely love Vince Flynn.A fabulous read!

Top of the Heap!!

Published by Thriftbooks.com User , 22 years ago
I was very impressed after reading Vince Flynn's first novel "Term Limits". I immediately purchased and read "Transfer of Power" when it became available. This one even surpassed the first novel in everything you like to read in this type of story. Hard to put down and go to sleep, you want to keep reading all night if necessary. Action is outstanding, relevant to the times and believable. The characters cover the whole scope of the good, the bad and the ugly and each one is done in magnificent style. His understanding of and the use of various types of military/civilian special ops units is excellent, coupled with the many times they are handcuffed by politics and behind the scenes manuevering of those in power, who are more worried about their press reviews than the final outcome of the crisis, makes for reading you feel a part of. Vince Flynn has rapidly gone to the top of my list of authors for whom I eagerly await the next book to be published. I hope that there are many more to come, and soon!!
Copyright © 2020 Thriftbooks.com Terms of Use | Privacy Policy | Do Not Sell My Personal Information | Accessibility Statement
ThriftBooks® and the ThriftBooks® logo are registered trademarks of Thrift Books Global, LLC