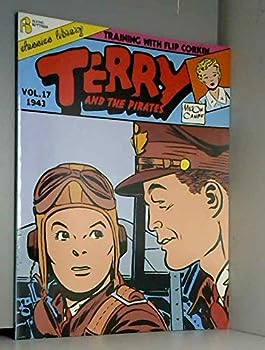 This description may be from another edition of this product. Terry and the Pirates (Training With Flip Corkin #17,1943) [Jun 01, 1989] Milton Caniff

Great, but doesn't have the famous Corkin speech

Published by Thriftbooks.com User , 16 years ago
Although marked "1943," volume 17 of the Flying Buttress classics library is the November 1942 - May 1943 continuity. Collectors beware! This sequence does NOT contain the famous October 17 Sunday episode in which Corkin delivers the Congressionally-recognized "Flight Officer" speech, which is to be found in the next album, "Taffy at War" (volume 18). Brought to a secret Japanese airbase by beautiful Axis spy Rouge in the previous episode, Terry Lee now aids U.S. paratroopers as they assault the base. Meanwhile USAAF pilot Corkin, supporting the raid, is shot down and must manage to survive the wiles of BOTH Rouge and a downed Japanese pilot. Eventually returning to base he is reunited with his galpal, army nurse Taffy Tucker. Terry's spying for the Kuomintang government has been more or less successful so he is rewarded with a commission as an air force cadet. Flip Corkin takes him under his wing but meanwhile Taffy is kidnapped by Rouge who gives her a near-fatal dose of morphine. Left for dead, her mindless body is found by Connie and Big Stoop, who bring her to Pat Ryan and Texan Joss Goode, USMC. Excellent drama-adventure from "The Rembrandt of the comic strip."
Copyright © 2020 Thriftbooks.com Terms of Use | Privacy Policy | Do Not Sell My Personal Information | Accessibility Statement
ThriftBooks® and the ThriftBooks® logo are registered trademarks of Thrift Books Global, LLC