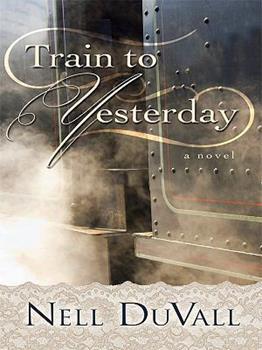 Will their love change the past, or secure it? On a steam train trip to publicize her firm's proposed high-speed rail link, Penny Barton meets Fletcher Dawe, a historical actor playing a Coshocton dry... This description may be from another edition of this product.

Published by Thriftbooks.com User , 13 years ago
This is a pleasant enough story and fairly well written, But I have no idea why the author had to resort to having all the main charachters either constantly snorting or clenching their fists. There was no need for that. It was a good story.

Published by Thriftbooks.com User , 13 years ago
Nell Duvall's "Train to Yesterday" is full of suspense, mystery, and mayhem. Penny, the heroine, finds herself back in 1855 Coshocton, Ohio where she meets Fletcher the dashing railroad entrepreneur. She is instantly attracted to him but he thinks she's a spy. How can she convince him she's from the future? How can they have a future together? With surprising twists and turns, this time travel romance will keep you reading to the exciting conclusion. -Tenaya Jacob, author of "Seasonings of the Soul."

Published by Thriftbooks.com User , 14 years ago
Nell Duvall's debut into fiction crosses genres with the ease of a virtuoso. Though labeled romance, Train to Yesterday is historical and is adventure. Duvall paints a vivid picture of what life was like in 1855 for both, the well to do and the poor, and how the heroine, a modern day executive, has to adjust to pre Civil War America. The story almost falls into the mystery category as Duvall weaves a suspenseful tale, which will keep you turning pages. For a writer who writes action stories, Train to Yesterday was a delightful change of pace.

Published by Thriftbooks.com User , 14 years ago
Railroad heiress Penny Barton works as the marketing director of Ohio-based HyperTrans. Penny arranges a special promo of the firm's product safe high-speed rail. A set is made to look like it is 1855 and Penny rides a mid nineteenth century steam engine train through a tunnel. She meets Fletcher Dawe, whom she assumes is a reenactment actor. Penny and Fletcher are attracted to one another but he assumes she is a lying saboteur as no one knows Penny. She in turn cannot find him until she sees the photo circa 1855. She further learns how her family earned their fortune, that Fletcher was a merchant who invested in high-speed rail; and the tragic death of canal lockmaster Dan Hudson. When Penny faints, she awakens in 1855 to a world in which the transportation industry violently competes between those who support the railroads and those who back the flatboats sailing the Ohio canals. This an interesting time travel romance with a vivid look at 1855 through the eyes of the twenty-first century heroine at how her family made their money. Although Penny adapts too easily and the romance between her and Fletcher takes a back seat to historical panorama of pre Civil War Ohio, sub-genre fans will enjoy buy a ticket to rid the TRAIN TO YESTERDAY. Harriet Klausner
Trustpilot
Copyright © 2022 Thriftbooks.com Terms of Use | Privacy Policy | Do Not Sell My Personal Information | Accessibility Statement
ThriftBooks® and the ThriftBooks® logo are registered trademarks of Thrift Books Global, LLC