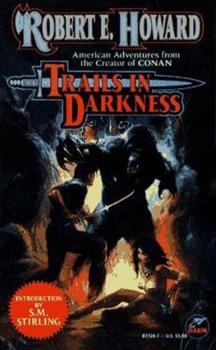 (Book #6 in the The Robert E. Howard Library Series)

Its European discoverers called the American continent the "New World", unaware of the ancient evils lurking there, their prehistoric origins antedating even the arrival of the Indians, whose legends warn of accursed places where hidden dwellers wait for human prey. And from the Old World equally ancient and loathesome eviles trailed, to threaten men's souls and sanity.

Published by Thriftbooks.com User , 18 years ago
a collection of differing stories. black canaan amazed me. the hoofed thing is also good. the stories are sort of between fantasy and horror. they are also more suggestive, and less direct than most of Howard's. but they are good. howard invests in the primal urges of man. going inside the man, showing how he is driven by fear, hate, etc. impressing.

Published by Thriftbooks.com User , 19 years ago
A mix of brooding postbellum Southern settings, and some Lovecraftian style stories (Howard and Lovecraft were long-distance friends and affected each other's work). Note that this volume uses Howard's unexpurgated original language, and doesn't prettify the post-War South. Several stories feature Scotch-Irish bloodfeuds sprung from the dust of Texas."The Dead Remember" - Set in 1877 and told in the form of letters and official documents, unusual for Howard. Jim Gordon, the author of the first letter, decided to take time out from a cattle drive at the home of Joel, an ex-slave he knew and get some food. Losing all his money at dice after getting plastered on tequila, Gordon shot and killed Joel and his fortune-telling wife Jezebel - and Jezebel, dying, says he won't live out the year."Black Canaan" - A rumor of an oncoming uprising in the Black River end of that part of Louisiana known as Canaan brings the narrator home from New Orleans to check out the real situation among those only a generation from slavery. But someone has unearthed some African magic that's even worse for the oppressed than the oppressors..."Kelly the Conjure-Man" - The title character, born a slave and rumored to be the son of a Congo ju-ju man, held immense power in the Ouachita pinelands of Arkansas, where he settled after the War."The Valley of the Lost" - John Reynolds, last surviving fighting man of his Texan clan in the aftermath of yet another gunfight in the Reynolds-McCrill feud, takes shelter in haunted Lost Valley rather than die unavenged. Some places, though, are better lost. This tale bears the marks of Howard's long-time friendship with H.P. Lovecraft; enjoy."The Man on the Ground" - A very short story of a fatal fight in another Reynolds blood-feud."Black Hound of Death" - Here we have an evil-cult-of-Malik Nous story, but different from "Dig Me No Grave"in _Beyond the Borders_."'For the Love of Barbara Allen'" - John Grimes, after hearing one of his grandfather's tales of the campaigns of Nathan Bedford Forrest, is swept into a flashback of a past life, as his grandfather's brother. "[War] upsets the balance of things, and throws lives into confusion that eternity cannot make right.""The Hoofed Thing" - Crossover Cthulhu-type story, but with more brawn than Lovecraft himself normally deployed."The Moon of Zambebwei" - This is something like "Black Canaan", but far different in detail. Richard Ballville, absolute master of Ballville Manor in the Deep South, has held Constance Brand a prisoner for three years, faking her death - but now he's dying, and has only one hope for her survival: his rival and worst enemy, Bristol McGrath. The relationship between Ballville and McGrath is almost more interesting than anything else. McGrath would kill Ballville if he weren't already dying, and Ballville regrets nothing and rejoices in McGrath's past suffering, but they can trust each other on the most important matter in their world."The Horror from the Mound" - Steve
Copyright © 2022 Thriftbooks.com Terms of Use | Privacy Policy | Do Not Sell My Personal Information | Accessibility Statement
ThriftBooks® and the ThriftBooks® logo are registered trademarks of Thrift Books Global, LLC