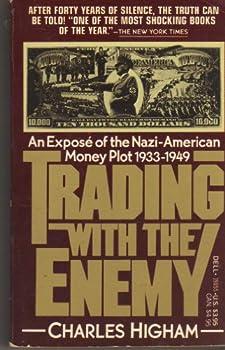 Trading With the Enemy

This perennial classic of political literature remains the only book to document the trading of the American financial establishment with Hitler's Germany in World War II, from Pearl Harbor to V-E... This description may be from another edition of this product.

Published by Thriftbooks.com User , 14 years ago
Do you want to read a book that will really rock your boat? Then pick up "Trading with the Enemy" The Nazi-American Money plot 1933-1949. Since I have taken up as a research project for myself, the investigation of World War II, from the philosophical perspective of `The Just War' notion or concept, I find myself being lead down many a strange alley. After reading much of the conventional literature on the rise of Adolf Hitler, the obvious question occurred to me; Where did Adolf get his money? Nobody gains political power, EVER, ANYWHERE, without money. Anybody who thinks that even our soft spoken, country gentleman Jimmy Carter jumped out of a peanut patch, or Harry Truman out of a Haberdashery store in Missouri, or Abe Lincoln out of a log cabin, or Sun Yat-Sen out of a rice paddy, or even Fidel Castro out of a sugarcane field, is very naive to say the least. Without money, nobody goes nowhere in politics - anywhere in the world - nor throughout the annals of History. It just doesn't happen - ever. So as an adjunct to discovering the moral righteousness or immoral iniquity of World War II, I have been led to investigating also, the financing of the Third Reich, and the personal backing for Adolf and his buddies. This is without any doubt a story yet to be written, of unbelievable proportions. Other books on this subject that the reader might find interesting: "Who Financed Hitler" James Pool "Hitler and his Secret Partners" James Pool "The American Axis" Max Wallace "Hitler's Secret Bankers" Adam Lebor "The Arms of Krupp" William Manchester "The Service" Reinhard Gehlen "The Dutchess of Windsor" Charles Higham "Merchants of Death" Engelbrecht and Hanighen "Shattered Peace" Daniel Yergin "The War Years 1939-1945" I. F. Stone "Errol Flynn" Charles Higham "The Secret War Against the Jews" Loftus and Aarons "Blowback" Christpher Simpson "The Plot to Seize the White House" Jules Archer Books written by Richard Noble - The Hobo Philosopher: "Hobo-ing America: A Workingman's Tour of the U.S.A.." "A Summer with Charlie" Salisbury Beach, Lawrence YMCA "A Little Something: Poetry and Prose "Honor Thy Father and Thy Mother" Novel - Lawrence, Ma. "The Eastpointer" Selections from award winning column. "Noble Notes on Famous Folks" Humor - satire - facts. "America on Strike" American Labor - History

Published by Thriftbooks.com User , 17 years ago
I read this excellent book 2 years ago and I became astonished when I read a huge part of USA bank system supported the nazi regime in Germany through money operations while the whole world was struggling against fascism. This support stated even before WWII and it was very important to carry on Germany's Hitler works and it lasted after the end of WWII. The period enhances 1933 to 1949. Very interesting.

Published by Thriftbooks.com User , 23 years ago
Anyone following current news should read this book. Most Americans are not aware of the technology we peddle overseas that gets shot back at us. This book reveals that there is some history of doing this.

One of the most important books of our century

Published by Thriftbooks.com User , 24 years ago
A necessary companion to "Gravity's Rainbow", this is the historical truth behind Pynchon's farce. The same companies that brought us the Allende assasination and Southeast Asian heroin, are here seen trading oil, munitions, and intelligence on behalf of the alleged enemy, World Fascism. The links between these Amerikan Nazis and the origins of McCarthyism, the CIA, and the Cold War are especially instructive. If you like this book, try the easier to find "The Politics of Heroin", Alfred McCoy.

Published by Thriftbooks.com User , 24 years ago
This book contains an important lesson for our times: quick profits and national security are sometimes compatible and sometimes conflicting objectives, and it is not always easy to determine which they may be at a given time -- though, viewed though the absolutist viewpoint through which US participation in WWII is now generally recalled, the actions and behavior outlined in this book strike one as genteel treason by respectable people and companies which was apparently accommodated by the government, with one shocking expose following another. It is instructive even as there have been inquiries on who armed Iraq -- and as there is an ongoing national security debate on technology export policy -- to note that US trade with the Axis was not completely cut off even after Pearl Harbor. For those who might be inclined to think that it is obvious that there are some things the US would never sell to certain other countries so as not to arm its potential enemies, they should think again; there have been too many situations where the "obvious" has been turned on its head. The book imparts a crucial and not widely understood civics lesson, especially in using the US's "good war" as a paradigm.
Trustpilot
Copyright © 2022 Thriftbooks.com Terms of Use | Privacy Policy | Do Not Sell My Personal Information | Accessibility Statement
ThriftBooks® and the ThriftBooks® logo are registered trademarks of Thrift Books Global, LLC