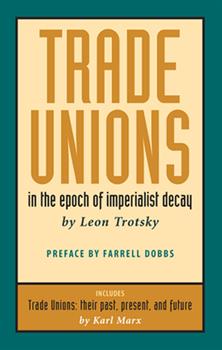 Trade Unions in the Epoch of Imperialist Decay: Featuring "trade Unions: Their Past, Present, and Future" by Karl Marx

by Karl Marx and Leon Trotsky

Food for thoughtand actionfrom leaders of three generations of the modern revolutionary workers movement. Invaluable to the practical education of militant workers who are relearning today what a strike is and how it can be fought and wonmilitants who, in the course of such struggles, become interested in ideas of fellow unionists about how the entire system of capitalist exploitation can be ended. "Relevance to events of today is remarkable.... An...

A useful book for those who want to strengthen unions today

Published by Thriftbooks.com User , 16 years ago
While trade unions in the United States continue to weaken as the 21st century opens, a relentless offensive by the employers and the government against wages and working conditions is forcing a small but growing layer of workers--from meat packers across the Midwest, to garment workers in a war production plant in Broward County, FL, to miners in the coal fields of Utah--to relearn why trade unions need to be organized where they don't exist, and defended where they do. These workers are learning how a strike can be fought, how to reach out for solidarity and extend it to others, and how a strike can be won. Through involvement in such struggles, they are becoming interested in ideas about how the entire system of exploitation can be changed. They become open to bolder perspectives. Fighters like these will be hungry for the lessons presented by revolutionary leaders of three generations of the modern working-class movement found in this new edition of Trade Unions in the Epoch of Imperialist Decay from Pathfinder Press. The book begins with Karl Marx's 1866 document "Trade Unions: Their Past, Present, and Future." The other major piece is "Trade Unions in the Epoch of Imperialist Decay," one of the last articles written by Russian revolutionary leader Leon Trotsky before he was assassinated in 1940 during his exile in Mexico by orders of Stalin. Farrell Dobbs, who was a militant leader of the historic 1934 Teamster strikes that built union power in the trucking industry across the Midwest and then became a central leader of the Socialist Workers Party until his death in 1983, contributed valuable prefatory material. Along with this, Pathfinder continues its high standard of including an introduction, notes, photo spreads, glossary, and index to make this material highly accessible to contemporary readers.
Copyright © 2020 Thriftbooks.com Terms of Use | Privacy Policy | Do Not Sell My Personal Information | Accessibility Statement
ThriftBooks® and the ThriftBooks® logo are registered trademarks of Thrift Books Global, LLC