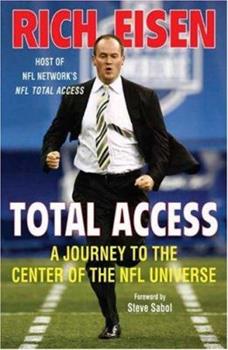 Total Access: A Journey to the Center of the NFL Universe

Rich Eisen always wanted to write a book, not only because he has a lot of fun, interesting stories he's been dying to share with everyone, but also because he's interviewed hundreds of athletes--many of whom like to refer to themselves in the third person. In his eleven years as a national television sportscaster, Rich Eisen has been envious of those athletes because Rich Eisen has never been able to do that on his job, so the host of NFL Network...

Published by Thriftbooks.com User , 14 years ago
Total Access is a funny, well written view into the world of the NFL by the journalists that cover it. The book offers a look at what it's like to cover the most popular sport in America. What makes the book so compelling is that the stories are written in the same manner that Rich Eisen speaks, his descriptions always offer some humor, and the personal anecdotes are what make the book so appealing. A really entertaining read!

such a great book!

Published by Thriftbooks.com User , 14 years ago
Imagine you are not from US. Imagine you live in Chile, bottom of south america, where all you have is ESPN's Sunday Night and Monday Night games and nothing else... Well, "total access" lets you understand why american football is so popular and, if you already love fotball, like it more than you did before. congratulations rich, great book, great sport... hope to have nfl network in latin america

Must-read for fans of the NFL and NFL Network

Published by Thriftbooks.com User , 14 years ago
Rich Eisen's book "Total Access," is a great inside look at the goings-on of the NFL Network and its programming. I know a couple of reviewers said it was recycled material (i.e., transcripts of interviews that Eisen has done) and that's true. But certainly most readers have not seen every single interview that's ever been aired, so there's bound to be something new in that regards. Also, there are many great anecdotes about players and the NFL Network crew, in particular a great story regarding former head coach and present analyst Steve Mariucci and a piano in the crew's hotel in Canton, Ohio (it can be found in the Hall of Fame chapter). My favorite chapter may have been the second, which was about the Pro Bowl. Rich Eisen does a great job of illustrating how laid back it is at the Pro Bowl and some of the cool interactions that go on between players and the NFL Network crew. The chapter about the Combine is very interesting in particular as well. If you love Rich Eisen, the NFL Network, and football in general, you should find this book very fascinating. It didn't take me long to read at all and it probably won't be long until I read it again.

Published by Thriftbooks.com User , 14 years ago
Rich Eisen, the Host of NFL Network's NFL Total Access, gives football fans a new holy book to assimilate. TOTAL ACCESS - A Journey to the Center of the NFL Universe is an overtime kickoff return for a touchdown. Eisen takes us through a non-stop calendar year of covering America's most passionate game. Starting with the delicious excess of the Super Bowl, he moves from the Pro Bowl (relaxed and family-friendly), through the Combine, Owner's Summit, Hall of Fame weekend (deeply moving and sometimes hysterical), concluding the regular season with an in depth look at the eight game road-to-the-playoff broadcast by the NFL Network. Also, throughout the book, Eisen writes of the incremental and determined rise of the NFL Network from it's beginning to complete legitimacy when it scored an the eight game broadcast package from former Commissioner Tagliabue. Eisen has a vantage point of the game of football that is both unique and familiar. He frames for us the culture of football as an insider and as a fan. The remarkable element of Eisen's book is not just the total access to the NFL but rather the access he affords us to his place in the NFL. It's refreshing that he doesn't hide his exuberance for his job. As the face of the NFL Network, he clearly has the trust and access of players, coaches, referees and even Commissioner Goodell (Not to mention the veritable royalty of the NFL's rich history with which Eisen rubs elbows). And yet, with this book, Eisen gives us insight into these men who play and surround the game that we don't get in the sound bytes, clips, and interviews. Eisen strikes a perfect balance here using a smart yet consumable prose when sharing the highly entertaining stories he has experienced in the four years as anchor of NFL Total Access. He also has the wisdom to know when to step back and let the players speak for themselves. There is validation here for all football fans from die-hard to occasional, for Eisen authenticates the humanity, passion and great fun in the game of football that we all hoped to be true. I can't imagine that this book would not be the number one gift given this holiday season.

Published by Thriftbooks.com User , 14 years ago
Lots of fun with a book that takes little effort to read. Best part of the book is when the author blows out his hamstring running in a suit in front of the people at the NFL combine. Also was amazed to learn Deion Sanders has 2000 suits. Lots of behind the scenes stuff I did not know about.
Trustpilot
Copyright © 2022 Thriftbooks.com Terms of Use | Privacy Policy | Do Not Sell My Personal Information | Accessibility Statement
ThriftBooks® and the ThriftBooks® logo are registered trademarks of Thrift Books Global, LLC