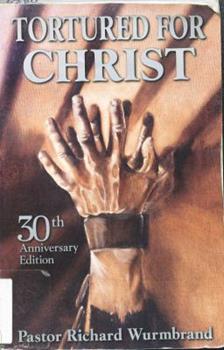 Richard Wurmbrand suffered 14 years in underground prison cells, months in solitary confinement, and years of physical torture. His only crimes were his fervent belief in Jesus Christ and his public... This description may be from another edition of this product.

Published by D. Light , 1 month ago
This amazing book tells the story of what it can mean to a Christian who shares their faith in a country where even owning a Bible can land you in prison. It was a very detailed account of those who end up in prison & are treated worse than an animal. This true story also showed me what a person can endure when they love Jesus & would give their life for Him as they share His love to those who do not know Him.

The cost of being a Christian in certain countries...

Published by Thriftbooks.com User , 17 years ago
Back in my preteen years, I first read Pastor Richard Wurmbrand's book Tortured For Christ. It had a big influence on how I viewed religious freedom in Soviet bloc countries. Wurmbrand wrote this book after his release from Romanian prisons in 1964, and he did so to share the story of how the underground churches in Communist countries have to operate in order to spread the Word and their faith. Rather than continue to minister to his countrymen, he was urged to leave and spread the news about the persecution. Wurmbrand probably did more to bring this situation to light than any other single person. With the demise of the Soviet Union, the situation has improved somewhat. But by no means has religious freedom bloomed. There are more freedoms in the former Communist countries, but the surge in Islamic countries means that Christian persecution has just migrated to new locations. Much of what you read here is still valid around the world. The situation's the same, just the names have changed. If you're wondering about the cost of being a Christian in many locations around the world, this book will help you to understand what that cost is.

A Peek at the Undergound Church in Eastern Europe

Published by Thriftbooks.com User , 17 years ago
Richard Wurmbrand, a Romanian Jew who gave up athiesm for Christianity in his youth, writes about his years working as a pastor in the secret, Underground Church in Romania. Wurmbrand writes about this very book that it has "no literary value," which is true. He writes in a "stream-of-consciousness" style, seemingly paying little attention to chronology and jumping from event to event. But while Wurmbrand does not skillfully craft a litarary masterpiece, he does give the reader quite a masterpiece as far as emotions and history are concerned. I'm aware of little historical work on Undergrounc Churches anywhere--be it Eastern Europe, the Middle East, China, or other lands. Wurmbrand does history a great service as he provides a first-hand account of Romania's secret church, how they worshiped, how they evangelized, how they communicated and provided support for each other, etc. The resourcefulness of the Church was both inspiring and surprising. This book is also very emotionally charged. Wurmbrand pulls no punches as he describes the means by which he and other Christians were tortured: placed naked in a freezer until nearly dead, warmed up, then placed back in the freezer repeatedly; made to partake in a mock-Communion service of urine and feces; cut several times then placed in a room full of starving rats; and then there's the conventional methods of torture: beating, attacking your family, and raping. Reading Wurmbrand's descripting of these acts shocked this reader several times. I highly recommend this book for both its historical and inspirational value. It is also highly recommended because, while Romania's Underground Church no longer has to operate in secret, there exist Underground Churches in other nations of the world: China, Iraq, Saudi Arabia, and Cuba (just to name a few). Reading about this particular underground church has given me insight to how the other Underground Churches still opperate today.

A tearjerker for those of faith... simply compelling

Published by Thriftbooks.com User , 17 years ago
This book recollects the horrors that Christians endured behind the Iron Curtain in communist Romania. Richard Wurmbrand was a Jewish convert and recalls that their Soviet liberators who rescued them from Nazism merely supplanted one evil for another. He points to his persecution, and recalls that endured by his wife and son. The tortures were graphic and manifest the depravity of man. I was awestruck by the child-like faith and the lack of bitterness by Christians at their tormentors. They were starved, beaten, persecuted, and imprisoned. What is more, they would not repudiate their faith. I was particularly moved by a young boy who refused to recant Christ. Under the penalty of his own torture, the boy asked that his father not give in to cowardice by repudiating his faith that he might protect his son. The poor child echoed his Christian patriotism in avowing, "For Christ and Fatherland." Thereafter, he was promptly pummeled to death for perceived disrespect to his communist torturers. However, many former communist butchers had the hardness of their hearts broken and they were moved by the testimony of those that they persecuted. The stories are captivating. Wurmbrand stood up for the truth of the Gospel of Jesus Christ. The Soviet Union and Warsaw Pact nations covered up their militant state-sponsored atheism by infiltrating and controlling a few token `tolerated' churches. Wurmbrand like other patriots, such as Russian nationalist Aleksandr Solzhenitsyn, emerged to tell the real story of the anti-Christ communist system. For occasional abuses in the United States, like municipalities harassing churches with zoning ordinances and attacks on an expression of faith by individuals in public places, we don't realize how good we have it in contrast to Red China today or Romania during the Cold War. My life has been a cakewalk in contrast to the sufferings endured by the persecuted church. This book is humbling, compelling, and emotional for those of faith. "We are pressured in every way but not crushed; we are perplexed but not in despair; we are persecuted but not abandoned; we are struck down but not destroyed." -2 Corinthians 4:8-9

Published by Thriftbooks.com User , 21 years ago
Tortured for Christ is a story that is powerful and filled with the real-life, daily experiences of a prisoner of the Communist Regime. This man endured starvation, extreme cold, and physical torture by his captors, simply because he refused to deny Jesus Christ. The amazing thing in his books is his uncanny Yiddish humor that offsets the unbearable suffering he endured. In all the survivor stories I have devoured over the years, this one is filled with something unique-HOPE. Hope in God, hope that his wife and son survived, hope that he would somehow survive to tell his story. Many men and women have survived incredible odds, but when God is in the narrative, as in Wurmbrand's, it becomes a miracle. This book changed my life...for the better!

Counting everything as meaningless compared to Christ

Published by Thriftbooks.com User , 22 years ago
When I read this book it did not take long for me to be overwhelmed by the stories. Richard Wurmbrand is not only an incredible writer, but is an incredible man of God. He talks about how hard it was to endure the Communist desire to see him deny his faith, but because of the strength given him by Christ, He was able to stand firm in his faith and never budge. He truly is a hero of the faith,and this book is what first sparked my desire to find out what is going on in the world as far as persecution is concerned. Richard Wurmbrand is now my personal hero, and is an incredible encouragement to me. Christ, through him, has taught me that I don't truly understand what it means to count everything else as worthless compared to Christ. This is a must read book, along with the sequal to "Tortured for Christ", the book "From Suffering to Triumph".
Trustpilot
Copyright © 2022 Thriftbooks.com Terms of Use | Privacy Policy | Do Not Sell or Share My Personal Information | Accessibility Statement
ThriftBooks® and the ThriftBooks® logo are registered trademarks of Thrift Books Global, LLC