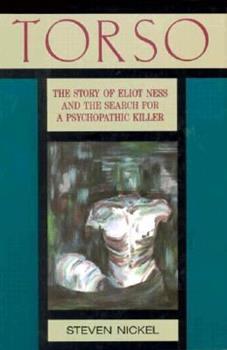 Torso: The Story of Eliot Ness and the Search for a Psychopathic Killer

Most people know Elliot Ness as the unimpeachable FBI agent who led a special Justic Department squad known as the Untouchables in a war against Al Capone. In Torso, Nickel explores Ness's later career, the search for one of America's first serial killers. 20 photos.

On the Trail of the Torso Killer

Published by Thriftbooks.com User , 14 years ago
I only recently became interested in the story of the Torso Killer, when recent rumors of a movie version of the story became prominent. Although this is one of the few books about the murderer, it is lean on fact. The primary focus seems to be more on Elliot Ness than the story of the killer. Twelve bodies that were found in Cleveland in the early 1930's were attributed to "Mad Butcher of Kingsbury Run". The trademark of the killer was how he dismembered the bodies and disposed of them. Aside from the desciption of the discovery of bodies, I felt as though little time was spent discussing this still unknown killer. Instead, the author leads readers through the career path of Elliot Ness. Though interesting, it is not the reason I purchased the book. The story in itself is not helped when Ness seemingly withdraws himself from the case. Of the notorious serial killers and mass murders in American history, the Cleveland Torso Killer seems to have vanished into some degree of obscurity. Some of the facts that are known may never be made public because of the passage of time and investigators' deaths. The little information that is available makes it difficult to write a good book much less a movie based in fact.

Published by Thriftbooks.com User , 17 years ago
The book's title is somewhat misleading us into believing that the 1930s `The Untouchables' character of Elliot Ness ran a serial killer investigation. Half this book is the life and times of Ness who happened to be Director of Public Safety in Cleveland while his skid row turned up mostly unidentifiable dismembered remains of vagrants, it was Ness who gained the most attention throughout the investigation by eventually burning down the homeless slums of the Kingsbury Run district in an attempt to clean out, tag, and fingerprint potential victims in the making, probably destroying the killer's Cleveland homeless hunting grounds, also a turning point event in Ness's career, a prohibitionist alcohol distillery buster, who once put away the national crime lord Al Capone, sadly failed systematically to progress his ratings with the city, eventually becoming involved in a hit and run accident that cost him an election run as Mayor, the over-hyped but none-the-less interesting account of Ness is all here, but maybe a little bit more than a seasoned non-crime fiction reader would care to expect, means you get only about 100 pages of the Torso investigation, where we concentrate on the city coroner Dr. Samuel Gerber and Detective Peter Merylo. Ness comes into play now and again, obviously as a propaganda figurehead designed to play to the media, backfires most of the time he does appear by getting involved in the wrong thing at the wrong time, still had a very high success rate in exposing corruption, and did work on a number of highly constructive policies like getting kids off the streets and stressing the fight against disease, obviously behind the scenes worked with the ""good guy"" force heavies getting all the important political prohibition work done (alcohol prohibition was a failure not because alcohol is safe to use but because prohibition itself actually increases the prohibited drugs risks, usage rates and overall crime goes up because of it, a statistical fact). It is reading the situation of these same propaganda violent cops becoming cold case serial killer squads, even before the term serial killer was used, makes it an absurd situation of bad police management for the 21st century reader to contend with, and was the reason Ness went bust in the end and even more importantly, why the killer got away with so much in the first place. Thus the investigation in Torso is not like any other, the cops are a different breed (just like out of a comic book meaning useless in real life) and the concept of `stranger killing' was not even present then. The classic book "The Complete History of Jack the Ripper by Philip Sugden" is based on the police records at Scotland Yard of the investigation at the end of the 19th century, news paper clippings and various memorandums that followed with surprising valid detail (all 500 pages of it). Torso reads like trying to find anything factual as if anyone except the leads could read, write or file reports, po

Published by Thriftbooks.com User , 20 years ago
In the 1930s over a dozen murders were attributed to the "Mad Butcher of Kingsbury Run", a ravine that runs through Cleveland Ohio and contains this stream and railroad yards. Most of these bodies were unidentified: headless, the arms, legs, and torso were cut up by someone who knew anatomy or butchering. It was never solved, altho one suspect was made to confess, repudiated this confession, and then found a suicide in jail. Such serial murders were rare in America; earlier serial murderers did it for money and left this trail. No motive was ever established for these murders. Most sex murderers are the product of large cities, which have anonymous victims or perpetrators. Chapter Eleven summarizes these cases. This book is about the later career of Eliot Ness. After Chicago, he was put in charge of the Alcoholic Tax Unit of norther Ohio. He cleaned out bootleggers, hitting a still every day. Organized crime made Cleveland a safe haven for criminals on the run. Corruption had spread everywhere; neighborhood crime had greatly increased. Harold Burton became mayor, and chose Eliot Ness as Director of Public Safety to oversee the police and firemen. (Burton later became a Senator, a friend of Truman, and was appointed to the Supreme Court.) The ineffectiveness of the police was due to widespread corruption and complacency. With Prohibition gone, Ness prosecuted gambling and union racketeering. Ness cultivated a good relationship with reporters, and got favorable publicity. He tried to purge corrupt policemen but was met with silence. Then a police captain was caught in a cemetery lot racket. Another owned a restaurant which fronted for a gambling room. The bodies found in Kingsbury Run highlighted the corruption.Cleveland had been the worst city (after Los Angeles) for traffic deaths and injuries. Ness purged the traffic division, began arresting drunk drivers, prosecuted ticket fixing, gave harsher penalties for unpaid fines, and started tougher automobile inspections. Ness promoted traffic safety with a public awareness campaign. He began an Emergency Patrol with first aid training to reach any accident within two minutes. This cut traffic deaths by half, and he received national recognition. Some of the increased traffic fines were put back into the police budget. Squad cars now had two-way radios. A single phone call brought police assistance within 60 seconds. Ness was criticized for wasting tax dollars, but in one year overall crime dropped 38%, robberies by 50%! Public success was followed by private problems: divorce, late night socializing, stories of drinking.Ness later resigned to join the Federal Social Protection Program during WW 2. Afterwards, he became a businessman but was not successful. His campaign for Mayor of Cleveland flopped. He later met Oscar Fraley and began to write his book. Just before its publication, Ness died of a heart attack; he never knew of its success.

Published by Thriftbooks.com User , 20 years ago
Not long after his "Untouchables" days, Eliot Ness experienced many successes as Public Safety Director of Cleveland (OH). Unfortunately, capturing the 'Torso Murderer' was not among them. A relatively little known crime, this serial killer haunted Ness' time in Cleveland. This book is both a look at Ness himself after his Chicago accomplishments, and an examination of one of America's greatest unsolved serial killings. If you are interested in either subject, this is an excellent purchase.

Published by Thriftbooks.com User , 22 years ago
Thinking I'd purchased simply a true crime book, I was astonished to find that this book weaves the later career of Eliot Ness with politics in Cleveland in the l930's and 1940's with the unkown identity of a gruesome serial killer at that time. The author's sense of time and place is terrific. I was swept back to that time in history, almost against my will. And I found this to be far more horrifying a book than it appears. When I was two-thirds of the way done, I found that I absolutely had to close and lock my bedroom window. These crimes may have been committed before I was born, but they're still shocking and terrifying. See if you agree with me that Eliot Ness's take on who committed these crimes is the right one! Horrifying, historical, accurate, mesmerizing, all at once. I recommend it to anyone interested in terrific reading.
Trustpilot
Copyright © 2022 Thriftbooks.com Terms of Use | Privacy Policy | Do Not Sell or Share My Personal Information | Accessibility Statement
ThriftBooks® and the ThriftBooks® logo are registered trademarks of Thrift Books Global, LLC