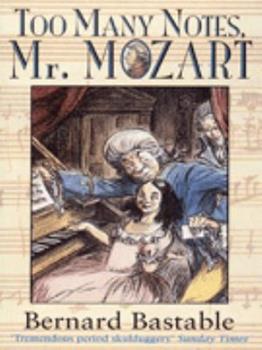 Too Many Notes, Mr. Mozart

Mozart is to become tutor to the Princess Victoria. As the possible future Queen there is interest in the child. During a stay at Windsor, a guest is poisoned by drinking from a glass intended for the Princess. Protective of his charge, Mozart begins to unravel a right royal conspiracy.

A charming and enlightening look at the private lives of royalty

Published by Thriftbooks.com User , 15 years ago
Hired as a music tutor to Princess Victoria, who is isolated in the forlorn surroundings of Kensington Palace, Wolfgang Gottlieb Mozart (rumors of his death were exaggerated) becomes involved in the personal lives of her relatives. Mozart is charmed by his spirited young charge, but dismayed at her virtual imprisonment by a mother desperately attempting to keep her away from bad influences. Ah, but is Mama herself a doubtful example? Is her alleged lover pilfering funds? Mozart accompanies the Princess and her retinue when her mother reluctantly allows her to meet her illegitimate cousins, the numerous Fitzclarences, born of King Williams long liaison with the actress Mrs. Jordan. The visit is fraught with political significance, as the country does not like the estrangement between the King and his heir. The interactions of the extended family are well drawn and extremely interesting. Characters are brought vividly to life. This is the personal side of court life that so rarely makes it into history. Violence at the happy gathering causes Mozart to suspect that someone is out to remove Princess Victoria from the line of succession. A thoroughly enjoyable book. I wish there were more in the series.

Published by Thriftbooks.com User , 21 years ago
Wolfgang Gottlieb Mozart is an aging and neglected composer who, in 1830, is summoned to Kensington Palace to give piano lessons to eleven year-old Princess Victoria, the niece of King George IV. Mozart takes an immediate liking to the charming Victoria and sensing that her life may be in danger, decides to try to protect her. After King George IV dies, Princess Victoria becomes heir apparent to the throne and William IV is the new king. The book has a light-hearted tone. Victoria, Mozart and William IV are an extremely likeable trio and the plot is nicely resolved.
Trustpilot
Copyright © 2022 Thriftbooks.com Terms of Use | Privacy Policy | Do Not Sell My Personal Information | Accessibility Statement
ThriftBooks® and the ThriftBooks® logo are registered trademarks of Thrift Books Global, LLC