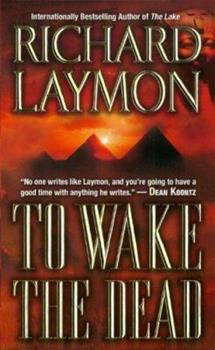 To Wake The Dead

Nothing CA satisfy the bloodlust of an ancient mummy when it awakens and leaves its coffin. And no one CA stop it. You CAot stop what is already dead.

Published by Thriftbooks.com User , 15 years ago
I own almost all of Mr. Layman's books and have to say this is one is a nail bitter. As usual he has some sick and twisted moments in the book but hey, that is Layman!! Highly recommend if you like his other books. Couldn't put this one down!

You can't keep a good girl down, or a bad one buried

Published by Thriftbooks.com User , 16 years ago
I love Richard Laymon novels, they are full of fun, horror and craziness. They are a wonderful way to escape the real world and enter into an alternate universe and realize you don't have it so bad after all. This is another of those books. Amara is a former Princess of Egypt who has been dead for 4000 years, she only has one fault, she won't stay dead. Amara is on a mission and anyone who stands in her way will well, they will die to regret it!! One of the things I so enjoy about Laymon is his realism within the horror fiction realm. Most writers always give wonderful happy endings to their horror stories, not always so with Laymon. He also isn't afraid to kill off the good guys or helpless children and animals, but isn't that the way horror should be? Crack open the cover, sit back and escape to the world of Laymon horror, you won't regret it.

This book is a Ripper!!

Published by Thriftbooks.com User , 17 years ago
I picked this up for a bit of gratuitous escapism and it turned out to be a really enjoyable book. OK, so it isn't in the same class as a good Stephen King novel, but Laymon wastes no time in dropping you into the deep end and doesn't get lost along the way. This story is less of a supernatural chiller and more of a splattering gore-fest. The book is actually a very good analogue to the classic B horror movies that were spawned in the 70s - Bravo! It is intentionally confronting as Laymon seemingly tries to squeeze strong scenes into every chapter and this might disturb some people or indeed many. But, if you are looking for a somewhat tongue-in-cheek, page-turning book, that makes no apologies, then this is worth a read.

Published by Thriftbooks.com User , 17 years ago
An undead mummy is stalking the halls of a natural history museum. Several captives are imprisoned in an underground vault and sexually tortured in bizarre ways. These are the two main plotlines in a twist and turn filled pulp horror novel from the late Richard Laymon. There are suprises around every corner, laughs and plenty of extreme gross-outs. If you have never read Richard Laymon before this is a fine place to start, but beware: this is undiluted horror-black, no sugar, no cream, but plenty of blood, sex and torture.Also recommended: BLOOD ROAD by Edo Van Belkom, THE CHURCH OF DEAD GIRLS by Stephen Dobyns, and RISEN by J. Knight.

Published by Thriftbooks.com User , 18 years ago
In 1926 Robert Callahan accompanied his father to Egypt and through an unusual set of circumstances found the tomb of Amara, the favorite wife of Mentuhotep I. He unknowing opened the magic seal that prevented her from walking the night and actually saw the body of the man she had killed. He finds an Egyptian mystic to fashion two seals that will keep her in her coffin and when that is done he smuggles her home to add the sarcophagus to the family's Egyptian antiquities collection.In the present thieves enter Robert's home and break the seal that binds Amara. Freed, she kills Robert before returning to her resting-place. The collection is willed to the Charles Ward Museum but at night Amara walks, killing anyone whom gets in her way. She looks for her infant son once buried with her and will not rest until she finds him. The police refuse to believe there is a killer mummy stomping around, but one man knows the truth and is bound by his promise to Robert to find a way to stop the mummy's reign of terror.Richard Laymon is an award-winning author and after reading this book it is easy to see why. Unlike the recent Mummy tongue in cheek (wrap?) movies, TO WAKE THE DEAD is a very scary novel, so frightening that readers will go to bed with the lights on. The author has given the mummy quite a personality without her ever saying one word and somehow he makes her believable to the audience and that is what makes Mr. Laymon so good because few horror novelists ever achieve the stark realism he attains.Harriet Klausner
Copyright © 2020 Thriftbooks.com Terms of Use | Privacy Policy | Do Not Sell My Personal Information | Accessibility Statement
ThriftBooks® and the ThriftBooks® logo are registered trademarks of Thrift Books Global, LLC