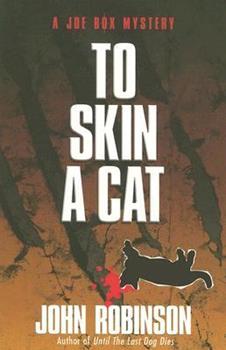 To Skin a Cat

The best in the Joe Box series

Published by Thriftbooks.com User , 15 years ago
"To Skin a Cat" is the best of the three Joe Box mystery books that I have written. The plot flows smoothly. The characters are well defined and have been built upon from the previous novels. This novel could be read without having read the first two, but that would not be as effective as reading them in series. The evil characters are effectively creepy without being "horror laden." The secondary characters enhance the story effectively. The plot involves the death of another PI who Joe had referred a client to. This leads to Joe going undercover and infiltrating a porno kingpin's lair. There is no foul language, even though the evil characters do use such language. The author effectively reflects their filthy moths without actually quoting them. Very well done! The resolution is very well done, and while there are elements of violence, they are more appropriately used than in the first book. Thus I was able to give "To Skin a Cat" five stars. I hope there are more in this series as the writing just got better and better.

Published by Thriftbooks.com User , 15 years ago
Hard-boiled Christian gumshoe Joe Box is back, and this time he's facing one of the worst foes he's ever encountered since becoming a Christian. Cyrus Alan "Cat" Tate is one of the biggest marketers and producers of hardcore pornography around, and when he announces plans to construct the "Wal-Mart" of porn stores, an adult megaplex ludicrously called "PornUtopia" in nearby Sunnyville, Box chalks it up as another example of how bad the times are and that's that. However, when Tate sends his overweight flunky M.L. Chalafant huffing and puffing up Joe's office stairs to retain him to oversee security installations, things get personal. At first amused at Tate's erroneous assumption that money buys all, Box is angered when he realizes the whole thing is a ploy: if Tate can get a known born again Christian on his porn payroll, then he's proved Christians are no better than anyone else. Box tosses Chalafant out, but not before making what may very well be a costly mistake - he refers Chalafant to one of his friendly competitors, private investigator Billy Barnicke. Despite his fiancé's reservations, Box is certain that's the end of the matter. Billy's not a Christian and he needs the work, so what's the harm? However, when Billy turns up dead, beaten to death - he dies in Joe's arms after calling him in desperation - Box is pulled unwillingly into a dark mystery that threatens perhaps man's greatest weakness: purity. To find out why Billy was killed and what exactly Tate is up to, Joe is going to have to travel into the lion's den and risk the flames of lust and ungodly passion. What he finds in the sleek halls of PornUtopia is worse than he imagines as he uncovers a depraved ring of criminals holding nothing sacred but money and their own desires. To Skin A Cat is the latest Joe Box mystery, and it strikes a resounding homerun, just like its predecessors Until the Last Dog Dies and When Skylarks Fall. Robinson proves again what many maintain is impossible: blending gritty, hardcore, pavement-pounding detective fiction with spiritual truths produces an engaging, enjoyable, and edifying read. To Skin A Cat is certainly not high-brow, literary fiction - but neither is Joe, and for fans of classic P.I., (private investigator), `40's pulp fiction, Joe is a harkening back to the guilty pleasure of an ill-tempered, hot-headed, stubborn detective who doesn't stop until he finds the truth. To Skin A Cat is the best yet of Joe Box, and this reviewer especially hopes to see more of the gritty gumshoe, hopefully through a larger venue (any chance WestBow or Bethany House will pick him up?). Though probably no one important listens to me, (whether they should or not is highly debatable), maybe someone will read this review and whisper into Randy Alcorn, Brandt Dodson, and John Robison's ears, and then maybe into their publishers' collective ears, and a series of collaborative books could tak

John Robinson does it again...

Published by Thriftbooks.com User , 15 years ago
Joe Box is a character that gets under your skin - and stays there. I've followed Joe through this entire series, and "To Skin a Cat" doesn't disappoint. This time, Joe bravely steps into the underworld kingdom of a pornography czar in search of the reason a friend was murdered. Joe must hold tightly onto his faith while surrounded by a darkness that would love to rip his soul to shreds. John Robinson successfully melds the mystery/detective genre with a "spiritual" detective who has a heart. There is no other writer today who does this better. Whatever you read this year - don't miss "To Skin a Cat!" HIGHEST RECOMMENDATION!!

Published by Thriftbooks.com User , 16 years ago
Joe Box is one of the most appealing protagonists ever created. He's the quintessential Christian hero of our modern time - struggling but strong when the chips are down, rough-edged and the product of a hard life but determined to walk in faith. Joe's grandma didn't raise a weakling. He's tough and hard to bluff, and rivals any secular hero you can name in my opinion. Beneath his battered persona lives a loving heart and courageous spirit. There's nothing this transplanted Kentucky gentleman hates worse than evil. And he's prepared to fight it with every weapon in his arsenal - the grace of God, a .38 Smith and Wesson, fists, prayer, and a sling shot if need be. With steel in his eyes and a prayer on his lips, Joe wades in this time to fight what he considers to be one of life's ultimate evils. When a representative of Cyrus Alan Tate - better known as CAT - tries to hire Joe Box Investigations, Joe declines. Tate has built an empire of pornography and Joe wants no part of it. Billy Barnicke, a competitor, accepts the job and turns up dead. Against his better judgment, Joe investigates. Tate's latest project is PornUtopia, a five story building without windows, perched on the edge of a small Ohio town. A tingle at the base of his spine warns Joe early on that he's in for a battle. Posing as a janitor, Joe gets hired at PornUtopia hoping to find Barnicke's killers. What he finds is horrifying beyond imagination. Tate has taken porn to a new level, providing virtual reality porn of every kind. Worse, he runs a sex slave operation to a shadowy world that will pay any price for children. Will a Christian man with guts and God on his side be enough to bring down Tate's sordid empire? You'll have to read the book to find out. John Robinson is one of the best mystery-action genre writers around. He champions an everyday hero, a flawed man who does his best to walk the walk in difficult situations. Joe Box is an exceptional character because he could be any one of a million men who do the right thing every day without fanfare. Whether male or female readers, Christian or non-Christian adults, this book has my highest recommendation.
Trustpilot
Copyright © 2022 Thriftbooks.com Terms of Use | Privacy Policy | Do Not Sell or Share My Personal Information | Accessibility Statement
ThriftBooks® and the ThriftBooks® logo are registered trademarks of Thrift Books Global, LLC