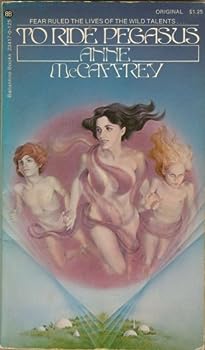 They were four extroardinary women who read minds, healed bodies, diverted disasters, foretold the future--and became pariahs in their own land. A talented, elite cadre, they stepped out of the... This description may be from another edition of this product.

Published by Thriftbooks.com User , 20 years ago
Every now and then you come across a book that you had to continue to read. That by the time you finished the book you were thanking the author for writing such a good book, yet cursing her for not writing a longer book. Well that is how it was for me; the problem being that I have neglected my homework over the past two days. If Anne McCaffrey?s other series (Pern, etc?) are like this, I will have to be careful that I have no essays due then. This novel deals with a group of people who have different telepathic ?Talents?. The strength of the book, besides the smooth writing style, is how the book was divided and the stories they told. The first story is more or less an introduction, then a generation later the other three stories tell us about Ruth and her latent but most interesting power, about the Maggie 'O tragedy and last about Amalda, a broadcasting empath. The only hitch to the book is that it was written in 1973 so for us who have been swamped be the ?X-Files?, the lack of government conspiracy may not seem just right. Remember when you open the book to set aside a day or two.

Published by Thriftbooks.com User , 23 years ago
Although I loved the Rowan books and the Pern books with all my bookworm heart, my mind always turns back to this little two-book miniseries. This novel may seem like a history of the Rowan universe, but its really an amazing book in its own right. I beleve that To Ride Pegasus and Pegasus in Flight should be considered compulsory reading for any sci-fi or fantasy fan.

To Ride Pegasus is a fantastic adventure!

Published by Thriftbooks.com User , 24 years ago
Anne McCaffrey is a powerful writer who has the ability to reach out and take the reader on an amazing journey. To Ride Pegasus is just the first of a series of fantastic stories about mind over matter. I highly recommend this book and Pegasus in Flight, The Rowan, Damia, Damia's Children, and Lyon's Pride. If you've not read them all, you are missing a great adventure. You will want the stories to go on and on.

Deserves more attention than it receives

Published by Thriftbooks.com User , 24 years ago
It is a shame that To Ride Pegasus has been shadowed by the dynamic Crystal Singer, Pern, and Rowan series. Set years before the Rowan, this book is an early indicator as to how powerful a writer Anne McCaffrey is. The reader is immediately captured by the wild plans of Henry Darrow and the discovery of psionic "Talent". This far-off future world isn't as alien as one would expect: familiar allusions and settings only make the story even more real. What is the greatest part of the tale is that Anne McCaffrey chose to focus mainly on women protagonists. Charity, Amalda, Dorotea, Molly-they all have the grace and character that would later characterize the Rowan books. Anne's male figures aren't too bad either-there is less of that macho bashing-type of sci-fi person and more of the sensitive and logical side. But amidst love and war come even more surprises. An incredibly powerful Gypsy woman leaves a path of death and theft across the city as she struggles with her life, which ends tragically. A hard man has his eyes set on ruling the world, and to bring that dream about he uses Amalda, a simple girl with the power to control thousands of people. And from death comes life: the newborn Dorotea has the power to find hidden Talents. Throughout this book the reader is immensely thrilled and satisfied. To Ride Pegasus truly deserves to be given the attention other McCaffrey books get.
Trustpilot
Copyright © 2022 Thriftbooks.com Terms of Use | Privacy Policy | Do Not Sell My Personal Information | Accessibility Statement
ThriftBooks® and the ThriftBooks® logo are registered trademarks of Thrift Books Global, LLC