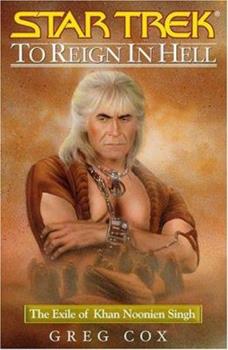 To Reign in Hell: The Exile of Khan Noonien Singh (Star Trek)

To Reign in Hell chronicles the fifteen years between the Original Series episode 'Space Seed' and the feature film 'The Wrath of Khan' - now widely regarded as a landmark in the Star Trek universe. Defeated by Captain James T. Kirk and exiled with his few remaining followers to the isolation of Ceti Alpha V, Khan Noonien Singh is marooned on a planet that has suddenly transformed into a hostile wasteland, where he and his band of acolytes must fight...

A good story and good science-fiction

Published by Thriftbooks.com User , 16 years ago
With time on his hands, James Kirk now has the time to investigate something that has haunted him since his climactic duel with Khan Noonien Singh, and that is what happened to those super-humans that he abandoned on Ceti Alpha V all of those years ago. This is the story of what Jim Kirk finds. It is also the story of Khan's people's battle for survival against a world gone mad - a story of super-heroism and super-egotism, of fighting and surviving. Overall, I found this to be a more interesting story than I anticipated. I mean, you know where it started (Space Seed) and where it ended (Star Trek II - The Wrath of Khan), so what surprises can there be? Well, if fact, the author does an excellent job of spinning out a gripping story of what happened on Ceti Alpha V, and boy is it a doozy! I found the old Ceti Alpha V interesting, and loved the way that the author showed it fatally unraveling, all while the inhabitants squabble and fight. I greatly enjoyed this book, and loved every minute spent reading it. If you like a good story and good science-fiction, then this book is for you. I highly recommend it!

A beautiful tribute to one of Trek's greatest characters...

Published by Thriftbooks.com User , 16 years ago
Whether or not you are an avid or just a part-time Trek fan, most people agree that 'The Wrath of Khan' was the best of the theatrical films based on this 60's space drama. What many people did not know when 'Wrath' premiered was its connection to an original episode called, 'Space Seed' which ended with Kirk leaving a rag-tag group of 20th century genetically engineered superhumans who attempted to hijack the Enterprise on a backwoods planet called Ceti Alpha V to begin a new civilization. What Kirk forgot to do over time, was to come back and check on their progress. From the Trek II movie we found that not long after being marooned on the planet, it's closest neighbor exploded laying absolute ruin to Ceti Alpha V. Khan and his band of genetically superior humans nearly perished. Chekhov accidentally finds them years later and Khan proceeds to wreak havoc on the galaxy in pure revenge against Kirk. What we DON'T know is what happened in between the end of Space Seed and the beginning of Wrath of Khan. Greg Cox takes what little information existed on the subject and true-to-form paints us a brilliant and creative story about how Khan begins his Reign in Hell on Ceti Alpha V. The planet originally in good shape is soon transformed into a virtual uninhabitable wasteland after its neighbor implodes a few months after their original marooning. Using his superior intellect, Khan manages to keep his small (and continually dwindling) group of genetically engineered humans alive through some luck and a great deal of sheer will. We find out more about his Starfleet wife who willingly was banished along with Khans outcasts. The story of how the followers somehow always viewed her as an outsider not worthy of their company came as an interesting side note to the story. Khan, ever the brutal dictator, almost comes across as someone worthy of pity during their seemingly endless trials. Just when you think things cannot get any worse, it does -- and dramatically so most of the time. What prompts this view into Khans past comes to light after the events in The Voyage Home when Kirk, Spock, Sulu and McCoy embark upon a trip to Ceti Alpha V to force some closure to the horrible events sparked as a result of the discovery that Khan was still alive. After arriving on the planet, Kirk, Spock and McCoy discover underground tunnels which gave Khans superhumans an actual place to live away from the Hell of life on the surface. They discover a journal which chronicles life on Ceti Alpha V and a great deal of the amazing experiences this group had to endure daily just to stay alive. Not just the trials of living in an always hostile environment, but also the seeds of discontent sprouting among the survivors. A few of Khans followers begin to doubt Khans ability to lead properly, and hatch a plot to kill him, and thus eliminate his wife, who just doesn't measure up genetically with the rest of the group. I can't remember how many times as I rea

Published by Thriftbooks.com User , 16 years ago
Agree with all the reviews written so far. Now how about getting Ricardo Montalban to read the audio version of this book? To hear Khan again....................... Classic

Published by Thriftbooks.com User , 16 years ago
I was hooked on this novel when I read the first chapter in the review section. It shows us what happened to Khan and his followers after landing on the planet he was exiled. I was going to wait for the paperback; however after seeing the cover on this one it was too hard to pass up. I wish there were more Star Trek books like this one. The novel should have been released with the movie; Wrath of Khan in 1982. If only there were more exceptional gems like this one. It shows the endurance of this legendary film. Only in Star Trek can a film well over twenty years old generate enough interest to make a superior three part series. I have to say at first I was dissapointed in the pacing of Greg's first triology in the Q series; he completed a few years back. The Khan set of books, and this one is supposedly the last, is paced very well and keeps you reading until the end. Khan is a tragic character in the Shakespere tradition. Under the right set of circumstances he might have been a great leader. His arrogance and pride got in the way and makes him a classic tragic figure.

Published by Thriftbooks.com User , 16 years ago
A few years ago author Greg Cox brilliantly depicted Khan's backstory in the two volumes of his bestselling "The Eugenics Wars" novels. Now Cox has done it again as he wraps up his ambitious triptych with the exceptional new novel "To Reign in Hell: The Exile of Khan Noonien Singh". Greg Cox grabs your attention on the opening page and sets the stage for the enthralling and tragic tale of Khan's years on Ceti Alpha V. Cox has once again chosen to use a framing story around flashbacks, the same storytelling technique he used so effectively in his previous Kahn novels. In "To Reign in Hell", however, Cox wisely keeps the framing story very simple and allows Kahn himself to tell the tale. Set immediately after the conclusion of "Star Trek: The Voyage Home", Kirk, burdened by guilt and seeking answers travels back to Ceti Alpha V accompanied by Spock, Dr. McCoy, and Sulu. Hidden on the planet they discover a journal kept by Kahn that chronicles the fifteen years that Kahn, Marla McIvers and Kahn's genetically engineered followers spent on the doomed planet. The exiles struggle for survival is poignantly and graphically depicted as the fledgling colony endures a constant stream of tragic disappointment, and bitterness and sorrow ultimately chip away at Khan's sanity. With "To Reign in Hell" Greg Cox has skillfully taken the small amount of material established in "Star Trek: The Wrath of Kahn" and spun a spellbinding and heartbreaking tale that manages to clarify all sorts of continuity inconsistencies and a myriad of small details such as why Kahn's hand is covered with a glove. In the face of everything Khan maintains his arrogance. Cox absolutely nails the character, which comes as no surprise, after all he knows him intimately by now. It would have been quite easy for Khan's personality to overshadow the story but it never does. Kahn's ruthlessness and sense of superiority is nicely balanced by the other characters, especially that of his wife Lieutenant Marla McIvers. The tone and pacing of the plot is perfect and I particularly enjoyed the classical references scattered effectively throughout the story. We all know how Khan's story ends, but despite that the compelling narrative draws you in and keeps the reader mesmerized allowing the ironic twist at the end to come as a complete surprise. The end also ties in very nicely with "The Eugenics Wars" novels although it is not necessary to have read those volumes to completely enjoy and appreciate the story Cox tells in "To Reign in Hell". "To Reign in Hell" is a phenomenal story in and of itself and an extraordinary conclusion to the saga of Kahn Noonien Singh that Cox began with "The Eugenics Wars".
Copyright © 2020 Thriftbooks.com Terms of Use | Privacy Policy | Do Not Sell My Personal Information | Accessibility Statement
ThriftBooks® and the ThriftBooks® logo are registered trademarks of Thrift Books Global, LLC