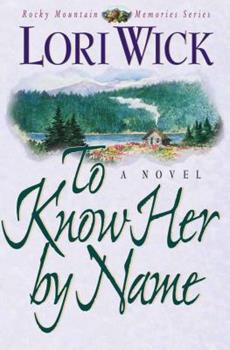 To Know Her by Name (Rocky Mountain Memories #3)

This description may be from another edition of this product. Who is this woman? McKay Harrington wondered. After chasing and killing an outlaw in the Boulder foothills, Harrington finds himself critically wounded and dependent upon a mysterious woman named...

Aw i love this book~!

Published by Thriftbooks.com User , 15 years ago
this book was sooooo sweet. It is definatley my new favorite book. I love how kind and gently the book is written. I used to like science fiction but often found it conflicting with my beliefs. and now i found Christian Fiction and i found this book and i loved it. I read it in about 5 hours. i love this book!!! i can't wait to read more done by Lori Wick. I loved this book...i can't say it enough...The beginning was enticing and the end beautiful. It held you captive till the end. Definatley a must read!

Published by Thriftbooks.com User , 19 years ago
This was new for Lori Wick. I had already read quite a few books by Lori Wick, but this book suprised me. Not that it was a bad book, it was a great book. It was just that Lori Wick, as I had thought, was a pretty easy-going writer. Nothing extreme. Her books didn't have much action. Not that, that is a bad thing, but this was the first book that actully had a villian. Well, a mean villian. I thought it was cool that Pup was a spy. And it pretty much had everything I wanted in a book. I thought it was so interesting and fascinating I read it in abou 6 hours.(:

This is a great book!

Published by Thriftbooks.com User , 20 years ago
I really like "To Know Her By Name". McKay is a handsome, daring man who was wounded in a fight. A country, reclusive woman finds the hurt man and takes him in. As he heals he finds out more and more about this woman. It turns out Callie is not as clueless and country girl as he thinks. It turns out she's working for the government as an undercover agent and is working on the same case he is. (He works for the treasury department.) Travel with McKay and Callie as they work to catch a criminal and slowly fall in love with each other.

This book has love, espionage, and strong Christian values.

Published by Thriftbooks.com User , 22 years ago
This Lori Wick novel is one of love and espionage, mixed with a strong Christian emphasis. To Know Her by Name is easy to read, but should be read after reading the two books leading uup to this one in its series. Callie Jennings and McKay Harrington are two completely different types of characters, but they share a common interest, working for the Treasury Department after the American Civil War. Both are employed by Nick Wallace. McKay and Callie meet unexpectedly in the woods, due to a twist of fate, or, as I like to call it, God's will. This book is interesting because of Callie's diverse personality. Sometimes, it is hard to know what she will do next. She is an undercover spy who tries to catch Duncan Phipps, a wealthy banker, in the act of dirty dealings. She poses as both a man and a women in an attempt to discover the secret dealings of Duncan and his men. Her last disguise for the case includes a blond wig, a Scandinavian accent, and a maid's occupation. Unlike Callie, McKay seems to have a steady and unmoving personality. While Callie is spying, he is performing his duty as a spot checker to different banks questionably involved with Duncan. Intertwined with Duncan's schemes are Callie's brothers, Govern and Jubal Hackett. This bend in the story adds to Callie's indecision on whether to aid the Treasury Department in the arrests of the Duncan gang of swindlers. In the end, Callie is put in a dangerous situation out of which only God can help her. As her mind is racing she thinks, "I have no idea what to do here, Lord. Does Nick even know that I'm in trouble? If he didn't try to see me last night, then he probably doesn't know anything. Would Nick want me to keep my mouth shut during torture?" This book also has an under current of symbolism. For example, Callie's secluded cabin in the woods, with only two male brothers for neighbors, symbolizes Callie's introverted nature. Due to her job, her life is filled with deception and duty, which causes her to keep her distance from people, including friends, which she has very few of. Her two closest friends are Nick and Camille Wallace, who are more like parents than friends. I highly recommend this author and book to anyone who loves espionage and betrayal, faith and hope, and best of all, God's ability to accomplish anything. This is a must read.

This Book Was Excellent!

Published by Thriftbooks.com User , 23 years ago
EXCELLENT!! This is a book you must read! Lori Wick keeps hold of the readers attention with her skillful storytelling. This novel is filled with mystery, suspense, and romance. I couldn't put this book down. Thanks again, Lori!
Copyright © 2020 Thriftbooks.com Terms of Use | Privacy Policy | Do Not Sell My Personal Information | Accessibility Statement
ThriftBooks® and the ThriftBooks® logo are registered trademarks of Thrift Books Global, LLC