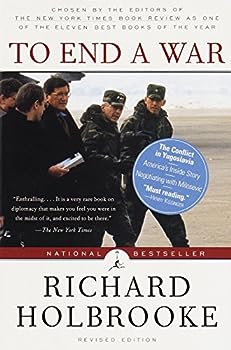 To End a War: The Conflict in Yugoslavia--America's Inside Story--Negotiating with Milosevic (Modern Library (Paperback))

This description may be from another edition of this product. When President Clinton sent Richard Holbrooke to Bosnia as America's chief negotiator in late 1995, he took a gamble that would eventually redefine his presidency. But there was no saying then, at the...

Published by Thriftbooks.com User , 15 years ago
In November, 2005, I attended a conference examining the implementation of the 1995 Dayton Peace Accords, which ended the war in Bosnia-Herzegovina. The event was held in the same Wright-Patterson Air Force Base facilities used a decade earlier, and was attended by numerous individuals that took part in the negotiations. One of the primary lessons I took away from this conference is the incredible amount of hard work that goes into effective diplomacy. It's daunting and fraught with risk. Accordingly, I believe Richard Holbrooke's To End a War is an excellent recap of the events leading up to Dayton, the hard work that went into the peace effort, and the initial obstacles to the agreement's implementation. The book is written entirely from Holbrooke's point of view as lead negotiator of the American team charged with brokering peace in Bosnia. After covering some obligatory history, it picks up with Holbrooke's small "shuttle diplomacy" team constantly moving between Washington, Belgrade, Zagreb, Sarajevo, and numerous other European capitals. This portion of the book is extremely interesting and reads like a who's who of international political figures in Europe during the mid-1990s. After an incredible amount of diplomatic effort, an international peace conference is agreed upon and held in Dayton in late 1995. Holbrooke compellingly describes the edgy, contentious atmosphere and the painstaking evolution of the final agreement. Finally, he reviews some of the initial challenges implementing the accords, including convincing the military Implementation Force to exercise an assertive role in executing its mandate. Throughout these events, meetings and interplay among Serb president Slobodan Miloseviæ, Bosnian president Alija Izetbegoviæ, Croat president Franjo Tuðman, and their subordinates are described in detail. (Interaction with Miloseviæ is particularly interesting.) In addition to balancing the hostility between these warring parties, Holbrooke and his team must tend to the concerns of European countries striving for prominence after the collapse of the Soviet Union, a fragile, image-conscious Russian Federation, and disagreement among diplomats and policy makers back in the U.S. Again, diplomacy is hard work. Ultimately, the reader should take the book for what it is: an account written from the perspective of one person (acting in a politically appointed capacity, no less). Certainly some of Holbrooke's points and appraisals will be challenged by others involved in the events. That being said, To End a War gives the appearance of being factually accurate. While his interpretation is certainly subject to criticism, Holbrooke's description of events looks solid. Readers familiar in the war in Bosnia and the Dayton Accords will find this a must read. In addition, the writing is compelling enough to draw in anyone more generally interested in diplomacy, international relations, and statecraft. Reasons to read this book: >>An excellent

Published by Thriftbooks.com User , 18 years ago
It is true whoever said it that this book reads like any interesting thriller. I knew Holbrooke was an excellent negotiator and a restless soul when it came on bringing peace to Balkans but I just didn't know how much until I've read this book.Holbrooke is such an excellent writer too and its a shame that he isn't a regular one - he'd hit the bestsellers list for every book he would write because this book was meant to be a memoir of a diplomat and you all know how confused they really are but all along I felt Holbrooke wrote a book about me and as if I was reading about myself. That is all because he wrote with such enormous honesty and without reservations of any kind and each moment he describes in this book is so vivid. You would feel just like you have been Holbrooke himself. Anyways,it is a book that I would highly recommend to everyone, not just those who are interested in Bosnia's past because this book truly is a box full of morale stories and unlimited life strategies written by a triumphous person who worked so hard to bring peace and secure a good name to United States of America first than the rest of civilised world. What I found most interesting in this book was the moments when Holbrooke met with the greatest deceiver on Earth, Milosevic and his supporters. Most of his dialogues with them are described so vividly and after all it all seemed as if these dialogues were nothing but a chess game in which Justice through Holbrooke as U.S. proud representative - WINS with honour as INJUSTICE loses with eternal disgrace.

Published by Thriftbooks.com User , 18 years ago
"Reads like a thriller" wrote one student on his course evaluation. This account by Clinton's principal negotiator to end the conflict in the Balkans takes the reader from the landmined mountain roads of Bosnia to the late-night arm-twisting of Milosevic and others at Wright-Patterson AFB. I have used the book in different courses to provide an understanding of the substance of the Balkan conflicts, the role of leadership, and an on-the-ground exposition of diplomacy. Students tend to have two kinds of reactions. First, it reveals (through an admittedly single, American perspective) the issues at stake in the Balkans. But it also offers a more general model for the unseen stakes and battles in diplomacy itself: the variety of interests, the relative (in)flexibility of position on different issues, examples of "spin" to the press, and displays of persistence, skill and the occasional human error (uh, we forgot to consult Croatia!). Although the roads are better in New York, the book helps one begin to imagine some of the behind-the-scenes battles in the 2002-2003 UN negotiations on military action in Iraq.

Published by Thriftbooks.com User , 22 years ago
This very detailed book describes how many critical decisions were made to end the Bosnian war. It tends to be facts from Holbrooke's perspective. His anecdotes illustrate the difficult personalities he was dealing with through their actions, rather than his opinions. However, it is one person's perspective and I think it would be interesting to read accounts of the negotiations by other participants.

Published by Thriftbooks.com User , 22 years ago
Having just finished the german copy of this book, I still am very enthusiastic about it. It appears to be a pretty close and focused description on what happened in Bosnia and how they managed to resolve this gravest (so far) upflaring of the balkan bushfire. Written by the leading negotiator who in the end managed (together with his team and many others, of course) to put the fire down (not entirely out...), it offers some really deep insight into how our world is run. (The sources are rare where one can you find what is really going on today. and how...) For all those complaining about a self-serving aspect of this book I can only say that final truth is never found in a single source and were it not for this american initiative, this conflict would still kill way more people in its way than it does now. Mr. Holbrooke and everyone involved has every right to be a litte proud, I think. Finally I can only recommend this book as a very informative (in every aspect) and yet fun to read source of first hand information about a still ongoing conflict that is far from beeing settled. And yes, public service has become an option.
Copyright © 2020 Thriftbooks.com Terms of Use | Privacy Policy | Do Not Sell My Personal Information | Accessibility Statement
ThriftBooks® and the ThriftBooks® logo are registered trademarks of Thrift Books Global, LLC