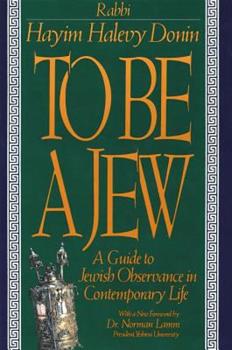 To Be a Jew: A Guide to Jewish Observance in Contemporary Life

The classic guide to the ageless heritage of Judaism Embraced over many decades by hundreds of thousands of readers, To Be a Jew offers a clear and comprehensive introduction to traditional Jewish laws and customs as they apply to daily life in the contemporary world. In simple and powerful language, Rabbi Hayim Halevy Donin presents the fundamentals of Judaism, including the laws and observances for the Sabbath, the dietary laws, family life, prayer...

This Book has Heart

Published by Thriftbooks.com User , 21 years ago
Every detail of Jewish practice is in this book, along with some of R. Donin's own aggadot and midrash on why these practices are important. In the end though, R. Donin is a believing Jew, and aggadot aside, he would say that any practice we do, we do because it's a mitzvah.Though Donin writes from an orthodox perspective, he is very gentle with the reader, never insisting that his way is the only way. He doesn't dictate, he encourages the reader to try what feels comfortable, and to explore, and provides material enough for a long, long exploration. I can't think of a single question about daily practice or synagogue etiquette that couldn't be answered by referencing this book.This book is intended for Jews, and as he states, particularly for Jews who grew up in a household where Yiddishkheit was not present. R. Donin assumes a certain amount of prior knowledge (such as understanding the Hebrew and Yiddish words I've used so far), so this is not a book for non-Jews with a casual interest in Judaism. However, anyone who has read one or two basic books on Judaism, or anyone who grew up Jewish, even if just barely observant should have no trouble with this book.Donin's writing is more than just engaging, it projects a kindness that really must be experienced. It was as though Zayde were reading aloud to me. The book has heart. Never once do I think that R. Donin has written this book because he is casting for people to turn back to orthodoxy. I really believe he was motivated out of a pure love for Judaism, and this comes out of the pages.

Published by Thriftbooks.com User , 22 years ago
As a French Catholic who has made the decision to convert to Orthodox Judaism, I found this book invaluable, both as a learning source and as a source of solace and joy. Rabbi Donin tells us, in lovely language, just what everyday life is like for the Orthodox Jew.Unlike many other religions, Judaism is primarily a religion of action and not beliefs. Although certain basic beliefs do exist, much in Judaism remains open to personal interpretation. Judaism does not demand that other people convert; in fact rabbis are encouraged to make at least three vigorous attempts at discouraging the possible convert. Conversion is, nevertheless, possible, and it is important to remember that Abraham was a convert, as was Ruth, a descendant of King David.In To Be a Jew, Rabbi Donin gives an overview of the history of Judaism and tells us that it was Maimonides who explained that any human being who faithfully observes the Seven Laws of Noah earns a proper place in heaven, no matter what religion he follows. Additionally, The Torah of Moses is a truth for all humanity, whether Jewish or not. Therefore, if one is not prepared to embrace the Jewish religion fully, it would be far better for him to remain outside this beautiful faith.The Holy Temple, as well, did not benefit Jews only. When King Solomon built the Temple, he specifically asked the Creator to heed the prayers of the gentiles who came to the Temple to pray (Kings I 8:41-43). The Jewish prophet refers to the Temple as a "House for all nations," (Isaiah 56:7). The Temple was the universal center of spirituality, a concentrated point where the consciousness of our Maker filtered down into the world.We also learn that in ancient times, the service in the Holy Temple during the week of Sukkos featured a total of seventy bull offerings. This, the Talmud explains, corresponded to each of the seventy nations of the world. In fact, the Talmud says, had the Romans only realized how much benefit, they, themselves, were deriving from the Temple, they never would have destroyed it.Although Judaism certainly does not consider conversion a necessity, what about those who, like me, do find that Orthodox Judaism is the only way to fulfill their own spiritual needs? As we learn in this book, the Code of Jewish Law (the Shulchan Aruch), prescribes three requirements for a valid conversion. Those three requirements are: (1) Mitzvahs. The convert must believe in one Creator and in the divinity of the Torah, as well as personally observe all 613 mitzvahs (commandments) of the Torah; (2) Milah. Male converts must undergo circumcision by a qualified Mohel or a ritual known as hatafas dam; (3) Mikveh. All converts must immerse in the Mikveh, a ritual bath linked to a reservoir of rain water. This must all be done before a court of three Jewish men who themselves are true believers, who accept the divinity of the Torah and observe the mitzvahs.Conversion, as Donin tells us, must be motivated out of pure lo

The Beauty of Traditional Orthodox Judaism

Published by Thriftbooks.com User , 22 years ago
Being in the process of Baal Teshuvah, I have searched and read quite a few books on Orhtodox Judaism. No other book comes even close to exaplaining so many details of Orhtodox Judaism in such a simple way to understand. If you are intersted in coming back to you Jewish roots, this is the book to read. Everytthing from Holydays, Shabbat, to comforting the mourner is explained in this book. Also, many prayers are listed both in Hebrew and in English. Also, a brief but excellent chapter is devoted to the history of Judaism, from Abraham to the present.

Published by Thriftbooks.com User , 23 years ago
This book is exactly what its title proclaims-a very detailed guide to living as a Jew. I did not find it as reader friendly as "Living Judaism". After reading that title, though, I returned to this book and everything was clearer. I highly recommend it as an excellent addition to any library. It stands on its own merits and is second to none.

Published by Thriftbooks.com User , 25 years ago
Although this book is primarily Askenazi it is a comprehensive but manageable introduction to Jewish living. I've used this book with people who wish to return to Judaism and they have found it invaluble. Along with 'How to Pray as a Jew' by Rabbi Donin this has to be a standard text for the modern Jewish home where there is little possible access to classical texts. This book is also useful in the class room when answering questions about Judaism before going onto further research. Certainly teachers in Lincolnshire, England, have found this book useful when teaching GCSE and A level Judaism.
Trustpilot
Copyright © 2022 Thriftbooks.com Terms of Use | Privacy Policy | Do Not Sell My Personal Information | Cookie Preferences | Accessibility Statement
ThriftBooks® and the ThriftBooks® logo are registered trademarks of Thrift Books Global, LLC