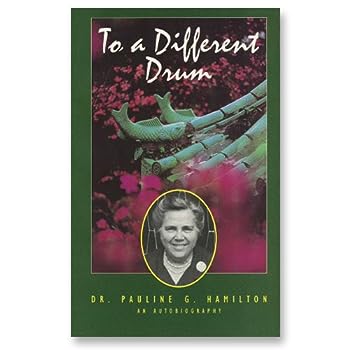 To a Different Drum: The Autobiography of Dr. Pauline Hamilton (An OMF Book)

This is the autobiography of Pauline Hamilton. Why did this doctor of physiology work with delinquent boys? Why did Pauline Hamilton choose to march to a different drum than her contemporaries, to... This description may be from another edition of this product.

Published by Thriftbooks.com User , 18 years ago
To a Different Drum is the autobiography of Pauline Hamilton, a short-legged, slightly iconoclastic East Coast scientist who became a missionary to China, where she had a lot of adventures. Actually, she began the adventures in America. After failing in love, health, and studies, she decided to kill herself by driving her sister's car off a country road in the Appalachians, but was prevented at the last moment by an odd "accident" that she attributed to divine intervention. In China, and then later in Taiwan, many other such fortuitous "accidents" occurred, many amazing, some quite funny. In one lovely scene, Pauline's housekeeper, whom she suspects of having stolen all her money, grumbles about being made to set the table for breakfast even though there is no food to put on it. Just then, a neighbor knocks on the door with homemade bread (mantou). A moment later, another neighbor comes by with 20 eggs. ("I laid them myself!" "Rather special, I'd say.") The housekeeper continues to grumble that they lack fruit or coffee. A boy rides up on a biscycle with a beautiful golden papaya, and a friend from another part of town comes by with a jar of coffee, which her airline employee husband brought from another country -- all in time for breakfast. Pauline tells this and other stories with a good sense of comic humor and drama. One reason I like this book is because it reminds me of many of my own experiences in China and Taiwan. I can almost taste the fresh papaya! The details she gives about Chinese life, and the interesting personalities she described, ring true to me. (I also know a few of the minor characters.) I have also had some very similar experiences with divine provision when I was out of everything, and had nowhere to turn, which were also rather funny. Of course, Pauline had hard times as well, which may be more important to the point of the book as a whole. The ultimate point of her book, and one may say her life, is "Trust God" She found many good reasons to do so.
Trustpilot
Copyright © 2022 Thriftbooks.com Terms of Use | Privacy Policy | Do Not Sell or Share My Personal Information | Accessibility Statement
ThriftBooks® and the ThriftBooks® logo are registered trademarks of Thrift Books Global, LLC