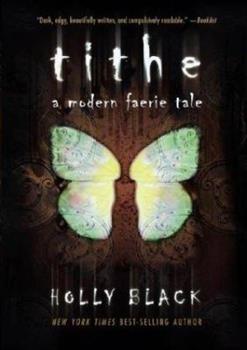 In the realm of very scary faeries, no one is safe. Sixteen-year-old Kaye is a modern nomad. Fierce and independent, she travels from city to city with her mother's rock band until an ominous attack forces the sixteen-year-old back to her childhood home. There, amid the industrial, blue-collar New Jersey backdrop, Kaye soon finds herself an unwilling pawn in an ancient power struggle between two rival faerie kingdoms--a struggle that could very well...

Published by Thriftbooks.com User , 13 years ago
Kaye has always been different. She's Japanese and a natural blond. She stopped going to school when she was fourteen because her musician mother kept them moving around. But what made the other kids really back away were the stories about her friends Gristle, Spike, and Lutie-loo. Everyone thought they were imaginary because no one besides Kaye could see these creatures. That's because Kaye's friends were part of the world of Faery. Kaye is dragged farther into this dangerous world when she saves a dying faerie named Roiben. After this encounter, she meets up with her old friend Lutie and Spike only to find out that her other friend Gristle has been murdered by the faerie she saved earlier, Roiben. Her friend then bring her into the plot to let the solitary fey be free for seven years: Kaye has to break the tithe, a ritual in which a mortal is sacrificed for the Unseelie Court. And with that, she is in the middle of a war between that the two powerful faerie courts. Holly Black presents a fantastical faerie world similar to the one in Melissa Marr's Wicked Lovely, yet it is difficult to compare the two. Both Kaye and Aislinn are strong-minded characters, but it is the setting and the rest of the faerie world that makes the stories so different; Kaye's is one filled with drinking and shoplifting. I appreciated how Kaye is unapologetic for who she is and found it amusing that Kaye didn't know her own cleverness. I also found Kaye and Roiben's relationship extremely romantic. I highly recommend this exciting story, especially for fans of other faerie stories. I definitely look forward to reading more of Black's faerie novels. reposted from http://thebookmuncher.blogspot.com

Published by Thriftbooks.com User , 13 years ago
"Tithe" reads, for me, like early Charles de Lint or John Varley. Holly Black has a fluency with dialog and an ease in wrapping "modern" concerns (alcoholism, poverty, teenage social structure, gay sex) into the structure of the "classic" fairy story (Seelie vs. Unseelie courts). You've read the fairy story before: it's a variation of Tam Lin, with the refreshing difference that Kaye saves herself. But it's the vibrancy of the main character, her completely realized presence on the pages, that brings "Tithe" to life. If Holly Black's characters were five years older, her work wouldn't be categorized as Young Adult fiction and might have access to a wider audience. Don't be fooled by the Y/A tag: Holly Black's books belong on the shelf right next to Pamela Dean.

Published by Thriftbooks.com User , 17 years ago
Genuinely well written fantasy novels exist. Honest. After poring through the heaps of badly sketched and horribly plotted books that glut much of the marketplace, this may not seem to be the case. Then you read something like "Tithe". I consider myself somewhat of an expert on children and teen books that deal with fairies and fairy kin. After reading "Tithe" I think I've finally met the best of the best. Kaye's life sucks. Her mom's a perpetually drunk rocker who's forever losing gigs and who shuttles her sixteen-year-old daughter from town to town constantly. After a run in with her mother's seemingly violent boyfriend, Kaye and her mum settle down with Kaye's grandmother in New Jersey. It was here that Kaye grew up until six years ago. Here that she would encounter fairies and their kin when a child. But now Kaye's grown up a lot and the fairies don't seem to be showing. That is, until she discovers and saves the life of a darkly handsome knight, wounded by an iron arrow. Suddenly Kaye discovers who she is and the price she must pay to secure her old friends' freedom. What becomes clear though is that though Kaye may think she knows what she is and who she loves, she may turn out to be very much mistaken. Several books kept leaping out at me as I read this one. The idea of paying a tithe (the blood of a mortal) for the fairies? I just read that recently in Elizabeth Pope's, "The Perilous Gard". A rock and roll background mixed with fairies and the Seelie and Unseelie Court? Straight out of "The War of the Oaks" by Emma Bull (which this book has MORE than a passing resemblance to). Heck, a girl discovering that her real skin color is, in truth, green is vastly similar to, "Keeper of the Isis Light" by Monica Hughes. Yet despite all the other books that this one reminded me of, it remained breathtakingly original from page one to three hundred and ten. I appreciated how much Holly Black knew about fairies and their lives. I liked how she incorporated these old factors with a text so contemporary that I was shocked to find references to online surfing and "The Sandman" graphic novels in it. Yet when it all comes down to it, the thing that really blew me away was Black's writing itself. I've rarely read such magnificent descriptions in a young adult story before. Listen to this sentence, "He smiled a smile that was like sinking your teeth into cake". Short. Sweet (ha ha). Well written enough that you have to pause and think about it a while. Now imagine that every other sentence in this book is that intriguing and you have some sense of "Tithe" itself. And now the obligatory note to all concerned parents. Yes, there is swearing in this book. Frankly, it works within the context of the story and isn't gratuitous in the least. Yes, there is more than one reference to sex. Even (gasp, faint) gay sex. Again, deal with it. I was amazed that Black had to guts to put it in. But then, Black constantly amazed me.

Published by Thriftbooks.com User , 18 years ago
One of the worst things about growing up under the steel clutch of the Disney fist was having to endure saccharine, sweet, cute, anemic faeries. Holly Black gives us true faeries as they were shown in myth and legend: scary, nasty, bloody-minded, inhuman (with their own agendas), sometimes cute, more often great and awe-inspiring, and by now means *safe.* Her protagonist is Kaye, who returns to her childhood home only to discover she is a pawn and intended sacrifice (the Tithe) between the Unseelie (dark faery) and Seelie (bright faery, but that doesn't mean nice!) courts. Kaye has been living on the fringes for some time now, dragged here and there by her loving but dysfunctional mother, hanging with the crowd that has nowhere to go, when she can find a crowd to hang with. It's life as it's lived in trailer parks and on boardwalks, life as seen by teen auto mechanics and young people in search of the next rave while looking for some kind of meaning to their lives. Through Kaye's encounters with faery knights, queens, and the unbound faeries who were her childhood friends, she learns of her own faery side and, most wonderfully, of her deeply human heart. Certainly this is not a book for adults who believe they can keep children safe by wrapping them in cotton wool. It is a story for those adults and teens who prefer life with grit, terror, and splendor. If you want legends with real blood in their veins, this is the book to read.

Published by Thriftbooks.com User , 19 years ago
I have so very little time to read anymore that it requires something of exceptional quality for me to spend even a few minutes a day reading. "Tithe" was not that type of book -- It was better. I sacrificed an entire night to read this from cover to cover in a single sitting. Ms. Black has created a faerie world in our own back yard, in this case New Jersey, that is slightly darker, grittier, and in its own way far more realistic that the sanitized view currently held of the Fae. She clearly did intensive research into the myth and legend of the Shining Folk and their kin, and this knowledge glows through in the incredibly well crafted work filled with believable three-dimensional characters and settings. Clearly aimed at the young adult and up crowd, I wouldn't recommend it for the younger devotees of Rowling's books, but more towards 13 and older due to some language and suggestiveness. I would recommend basing any decision on the maturity of the reader, however. I would also recommend that ANY fan of Harry Potter, or ANY high fantasy for that matter, that doesn't mind the somewhat more realistic language and actions portrayed in this novel should purchase it immediately -- devour it, savor it, read it over and over. It is destined to be a classic of both young adult AND adult fantasy. I cannot stress enough how quickly, as a reader of adult fantasy for over 25 years, this book has moved into my ranks of the five best stand alone fantasy novels of all time. Should she write a sequel of even vaguely similar quality then most assuredly they will take their place amongst my favorite fantasy series' of all time as well.
Copyright © 2020 Thriftbooks.com Terms of Use | Privacy Policy | Do Not Sell My Personal Information | Accessibility Statement
ThriftBooks® and the ThriftBooks® logo are registered trademarks of Thrift Books Global, LLC