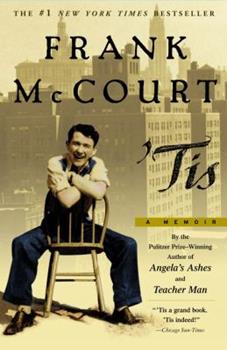 (Book #2 in the Frank McCourt Series)

A #1 New York Times bestseller and the eagerly anticipated sequel to the Pulitzer Prize-winning Angela's Ashes, this masterpiece from Frank McCourt tells of his American journey from impoverished immigrant to brilliant teacher and raconteur. Frank McCourt's glorious childhood memoir, Angela's Ashes, has been loved and celebrated by readers everywhere for its spirit, its wit and its profound humanity. A tale of redemption, in which storytelling itself...

Not as interesting as the first book

Published by Tia , 1 year ago
I love Angela's Ashes but this one didn't even come close. I suppose it was just less interesting. And I really was disappointed in some of Franks life choices but that is just my personal opinion and obviously doesn't have much ground when rating the authors writing style (which as always is witty and well thought out.)

Published by Arctos , 2 years ago
Frank McCourt left us in Angela's Ashes on the boat as it finally made its way into New York City Harbor, Tis picks up where he left off. A man who returned to his birth country changed from years of poverty, hunger, desperation, repression, and introversion caused by his father's alcoholism, and by an Ireland that was completely and totally controlled by the Catholic church in Ireland that his own headmaster had said in Angela's Ashes "We've been under English rule for so long we've adopted the English class system." Frank takes everyone on a journey through New York City of post WW2 where he's trying to make it and of where he meets some of the more memorable characters, from a Cheyenne Indian carpet layer to a stubborn cleaning lady trying to support her son going to Columbia University. He goes from job to job, serves in the army, and uses the G.I. bill to get his masters degree from NYU and becomes an English teacher. He gets married, he gets divorced, he goes from school to school. Truly a great book that blends history and the city called "America's Melting Pot" If you like memoirs, history, or even if your just curious after Angela's Ashes Tis is truly a great read.

A new fan of Frank McCourt

Published by Erica H , 3 years ago
Reading it felt like I was walking the streets of Ireland with little Frank.

You can hear his voice

Published by Thriftbooks.com User , 22 years ago
I was excited when this book came along because it meant that I could revisit Frank and continue hearing his facinating story. I think the brilliance of it is the narrative in which it is written. You hear his voice in every sentence; you hear him as he spoke in whatever stage of his life he was in. It's just a wonderful read and, although his story is mostly a string of tragedies posing as birthdays gone by, it's a story of hope. Hope because despite all he had been through he still managed to become what he wanted to be and has succeeded. And to do that and still retain a sense of humor is amazing. Saying anything more about the actual book's contents would do a browsing customer a great injustice. This is just simply a book you have to buy. That is, of course, AFTER you order and read Angela's Ashes.

Published by Thriftbooks.com User , 22 years ago
I don't understand why so many people seem to see Frank a failure as a teacher. As a teacher myself, I understand exactly what he went through in the schools. His "humor" and "irreverence" towards his students & their "attitudes" is very typical of all teachers--good and bad, and anyone who thinks it isn't, is very out of touch with our American education system. His description of his students was very realistic, and I got the impression that he was a very effective teacher, considering that the majority of kids in this country today have to be "entertained" in order to be "taught." I would be interested in hearing some reviews from his former students? How about it? Are you out there?

Published by Thriftbooks.com User , 22 years ago
I am so glad I was able to get the unabridged audio cassette version of 'Tis. The story is a lot more "feel sorry for me" than Angela's Ashes. (Sometimes I wanted to tell Frank, "Ah, for the love of God, get off your sobbin', and make something of yourself. Sure, aren't you in the greatest country in the world?") But, listening to the author is like hearing my Irish relatives talk to me---some from their graves---about their first days "in America." One of "my people," Frank McCourt, reading 'Tis, was my companion driving to work and coming home. And I sometimes either cried---it's so sad---or laughed out loud---it's so funny. Everything I already know about "what it was like" is in 'Tis, and McCourt tells his saga with that mixture of melancholy and hilarity that is---sometimes to our joy and sometimes to our "shame"---our persistent heritage. His story and his way are all so familiar, and, yet, almost unbelievable. McCourt's accent really makes his telling so alive. He sounds so much like my Irish grandmother, I kick myself for not getting her on tape before we lost her. (That's my "Irish talking," because as McCourt says, "No one ever 'dies' in America. People 'pass over' and 'pass away,' but 'dying' is too hard for Americans. And there are no 'gravyards' in America. It's all 'cemeteries.'"I wish I'd listened to the taped Angela's Ashes. If you haven't read 'Tis--or Angela's Ashes, for that matter--and you've got an Irish granmother in your past, do listen to Frank McCourt. As if you've asked him to "Give us a story, will you, Frank," The Man Himself delivers his memoir in rare and admirable form.

Tis' will touch your heart

Published by Thriftbooks.com User , 23 years ago
I appraoached Frank McCourt's sequel to Angela's Ashes with trepidation, believing it would be tough for this book to come close to the power and understated beauty of its predecessor. However, beginning Tis made me feel like I had never put Angela's Ashes down. This is a wonderful book in its own right, and anyone who enjoyed Angela's Ashes won't want to miss this. The setting is different but the narrative voice and expression are the same. We see McCourt wrestle with the difficulties of teaching literature to high school kids, which seems to be much more difficult for him than it was to initially survive in America on his own as a young immigrant. There are many passages in this book that I found myself reading over and over, or aloud to anyone in the room there to listen. I simply loved this book and can't wait to see what McCourt will come up with next.
Trustpilot
Copyright © 2022 Thriftbooks.com Terms of Use | Privacy Policy | Do Not Sell or Share My Personal Information | Accessibility Statement
ThriftBooks® and the ThriftBooks® logo are registered trademarks of Thrift Books Global, LLC