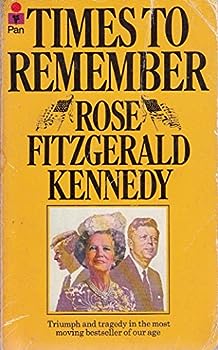 A fascinating chronicle of eight decades rich in history, drama, and courage, the new edition of Rose Kennedy's bestselling memoir is introduced by a moving tribute from her children and features... This description may be from another edition of this product.

Published by Thriftbooks.com User , 16 years ago
I loved this book, not just for the history and intimate details she reveals about the Kennedys but also I found her personally fascinating as she is one of those people who is truly a strong and unique person and is able to successfully convey this in her book, who has clear and forceful ideas about life and I found it very interesting to read. Most people, even famous or successful, are not so very clear on their views in life. I didn't always agree on everything she said, somethings were almost laughable, her comments on being thin or attractive were a little too much nevertheless I think it's a great book. I knew nothing about her and thought she was one of those woman who thru a fluke in fate, by marrying a man who was ultimately successful, who had successful childen, that she too came into the limelight, but I see now that she seems to be really the mastermind behind the kennnedy children and it's almost fascinating social experiment she practises on her children.

Published by Thriftbooks.com User , 19 years ago
Discover the Kennedys viewed by Rose Fitzgerald Kennedy, the matriach of the clan. First she tells about her familly and youth, and then you discover with her her children, her husband and all her life. You fell her pain when she lost her children. If you like the Kennedys, buy it.

Published by Thriftbooks.com User , 21 years ago
I received this book as a present and it remains a treasured gift to this day. Rose Kennedy was clearly a very intelligent and literate woman from all accounts and this shows in her memoir. My favorite parts of this book are the parts outlining the growth and development of Robert Kennedy. We watch him remain in character. His progress is tracked from the time he doggedly tried to teach himself to swim at age 4 to some 35 years later, in 1965 when the then Senator, an acrophobe, climbed a previously unscaled mountain in Canada out of love for his slain brother. Robert Kennedy was a stubborn, determined hardworking person and these traits showed up early in his life. From all accounts, Rose and Robert Kennedy were close. In looking at pictures of the mother and the son the physical resemblance is quite strong. Robert Kennedy was the only one of the sons to have the "Fitzgerald" face. Like his maternal grandfather who, in Doris Kearns Goodwin's book, "the Fitzgeralds and the Kennedys," Mayor John Fitzgerald took up a rigorous physical regimen to develop himself into a runner and augment his physical strength. We see this same characteristic in Robert Kennedy, the boy who tried to teach himself to swim, the undergrad who was determined to show his mettle on the football field and the man who would, in 1965 climb that mountain. Both mother and son shared a deep devotion to Catholicism and both were consistently described as serious and committed to following their social consciences. This book is such a treasure chest of memories and is well worth reading time and again.

a book that you can lose yourself in.

Published by Thriftbooks.com User , 22 years ago
This book shows that a family can stand together for century's. I enjoyed the history. I feel the infomation that I got in this book was the truth and not just someone telling it someway. It was real! Best book I'v read in long time. Your'v got to read it.

this is a time to remember the Kennedys. Read this!

Published by Thriftbooks.com User , 23 years ago
Wonderful source materials. Unfortunately lost my copy. I am researching information about Rosemary.
Trustpilot
Copyright © 2022 Thriftbooks.com Terms of Use | Privacy Policy | Do Not Sell or Share My Personal Information | Accessibility Statement
ThriftBooks® and the ThriftBooks® logo are registered trademarks of Thrift Books Global, LLC