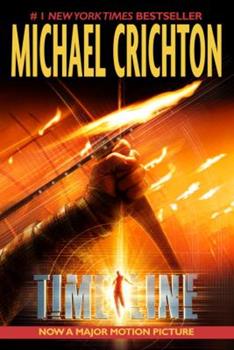 In an Arizona desert a man wanders in a daze, speaking words that make no sense. Within twenty-four hours he is dead, his body swiftly cremated by his only known associates. Halfway around the world archaeologists make a shocking discovery at a medieval site. Suddenly they are swept off to the headquarters of a secretive multinational corporation that has developed an astounding technology. Now this group is about to get a chance not to study the...

Published by tkfinch75 , 1 year ago
Different from the movie, but still good. The time travel is a little convoluted, but I enjoyed the plot of surviving in medieval times. As always the writing is very good, even the quantum foam babble. It's still not as great as Jurassic Park, but entertaining all the same. RIP Michael.

Published by Thriftbooks.com User , 18 years ago
This is the French text edition of "Timeline", a book that is an absolute page turner. It opens with one of the most absorbing first chapters I have ever read. An elderly man is found wandering in the desert, speaking in rhyme. There is something not quite right about him. The hospital to which he is taken discovers that the anomalies do not end with just his speech. Something is very wrong with him. Highly inventive and compelling, the reader is reeled in hook, line, and sinker, right from the get go. A wholly plot driven book, make no mistake about it, the story revolves around a highly secretive, technological corporation, ITC, headed up by a megalomaniacal, young genius, who is tooling around with quantum physics in a way that has never before been done. Our genius is spearheading a project that is truly cutting edge. Of course, he is not doing this for the betterment of mankind. He is doing it simply because it will ultimately result in mega bucks for him, if all goes according to plan. Alas, the best-laid plans often go awry. Cut to a group of dedicated historians who are involved in an archaeological dig, located along the Dordogne River in France. Their project, the ultimate restoration of a fourteenth century, feudal town, is very generously funded by ITC. Now why would a technological giant such as ITC be funding such a project? This is the basic premise of the book. The use of quantum physics is applied in such a way as to access the past. Here, a group of historians find themselves with the chance of a lifetime. They can actually enter fourteenth century, feudal France and experience it themselves. There is quite an adventure in store for them. Their reason for doing so, however, is not research. They are actually on a mission to rescue their chief historian who had ventured into fourteenth century, feudal France, using ITC's technological application of quantum physics. Due to an unfortunate set of circumstances, however, he found himself mired in the fourteenth century and unable to return to the present, as originally planned. What happens to these intrepid historians will captivate the reader. Well written and thoroughly researched, those who, like me, love science fiction, as well as historical fiction, will, most likely, enjoy this book. As a devotee of medieval history, I was entranced by the historical detail contained within the novel. I also found the book somewhat reminiscent of the sci-fi television series called "Sliders", in which the concept of quantum physics is utilized in order to slide into parallel universes. All in all, this well-written novel makes for riveting, escapist entertainment. I thoroughly enjoyed this book and found that I simply could not put it down!

Published by Thriftbooks.com User , 19 years ago
I think the book Timeline is a great book. It is about a group of people who get asked to go back in time with some other scientists to see what people did in the 1700's. Everything is going well until they get spotted and a few of the people are killed. If you want to figure out what happens to the rest of the scientists you are going to have to read the book. I would recommend this for people who like science ficton and for ages 12 to 15. It does have a little bad language, otherwise it is a very good book.

Timeline-Read it in No Time!

Published by Thriftbooks.com User , 21 years ago
I started reading Timeline Friday evening, stayed up until 4:00 a.m., quickly went through my Saturday chores so that I could immediately get back into the journey Timeline had taken me on! I stayed home Saturday night literally going through every event in the story, as if I were a character, and did not leave this house until I had completed the book and truly was sad to see it end! I was exhausted at the end, feeling like I was a part of this story. On Sunday, I met with friends and discussed this high energy, mix of history, and adventure story and we cast the roles for a hopefully up coming movie! This was a fabulous book. I wanted more!

Published by Thriftbooks.com User , 21 years ago
I do NOT understand what the other less rated reviewers read, but it most surely was not Timeline. I have read all of his books starting with Andromeda Strain in the early 1970's, and I think this book has more depth and thought. He did a lot of research to produce this book and from the physics to the time period, my imagination left the room. The characters were very well described as well as the terrain involved in each setting. This will be a movie as sure as Jurrasic Park was.I am not a casual book reader as I read all the time. I am also considered a very picky reader not easily entertained. This is one of the best books I have ever read.
Copyright © 2020 Thriftbooks.com Terms of Use | Privacy Policy | Do Not Sell My Personal Information | Accessibility Statement
ThriftBooks® and the ThriftBooks® logo are registered trademarks of Thrift Books Global, LLC