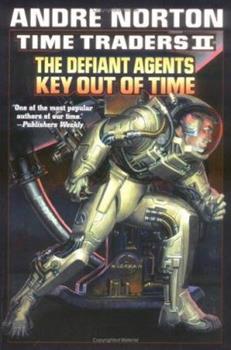 Time Traders II: The Defiant Agents & Key Out of Time

LOST IN TIME Exploring space and time is a dangerous business, and no one knows this better than Time Agents Travis Fox and Ross Murdock. So when both men are stranded on far-off planets with no hope of rescue from Earth, they must rely on their wits and their training to survive. But survival is only the beginning. To better handle the rigors of the alien world of Topaz, Fox and his crewmates have been implanted with the memories of their Apache...

Published by Thriftbooks.com User , 13 years ago
Time Traders II (2001) is the second SF omnibus edition of the Time Traders series, including The Defiant Agents and Key Out of Time. These novels are set in the near future when the Russians have discovered time travel and the Americans duplicated their efforts. Searching through time, both nations discovered traces of the alien Baldies from about ten thousand years ago. They used the alien starships to start sending colonists to former Baldie planets. The Defiant Agents (1962) is the third SF novel in the series. In this novel, Travis Fox is an Apache indian with post-graduate training in Archaeology. After returning from his trip in time and space, he convinces some fellow Apaches to volunteer to settle on an extrasolar planet named Topaz (for its yellow skies). Forty are selected for their skills in various areas. While attempting to deliver the Apaches to Topaz, the starship is attacked by Russian space mines. The pilot manages to overcome heavy g-forces to activate a new defensive system. The attacking devices are diverted for a few moments and the damaged ship crashlands under auto-pilot. The crew members in the pilot compartment are killed in the crash, as are many of the passengers. Yet some survive and so do a pair of very intelligent coyotes in the cargo area. The coyotes are the first to escape the ship, but Travis is close behind them. In this story, the surviving Apaches gather around a campfire to plan their activities. Their thoughts are confounded by memories of the past from the Redax machine. Some are fully living among their ancestors, but others are less affected. The Apaches decide to find a more inhabitable area in which to live. Travis scouts ahead and discovers a canyon with a good spring of water and numerous game trails. The Apaches move there and build a camp site. After the Apaches are settled, Travis prepares to scout for signs of the Baldies. He is convinced to take Tsoay -- a younger Apache -- with him. On the second day, they find fresh horse dung. Key Out of Time (1963) is the fourth SF novel in the series. In this novel, Ross Murdock and Gordon Ashe are helping Polynesian colonists on Hawaika. The planet is not much like the data on the Baldie tape. There are no longer any continents or large islands, only small isles scattered throughout the worldwide ocean. Karara Trehern is a Hawaiian of the royal Alii bloodline. She is a leader among the colonists. Moreover, Tino-rau and Taua -- the dolphins -- obey her commands. Ross and Gordon are prepared to set up a time viewer to determine what happened to the planet. So far, their search for ruins to provide a guidepost to the past has been unsuccessful. The ship will be leaving in four more days, so they need to erect the machine soon. In this story, Ross and Ashe set up the time viewer and peep first at ten thousand years in the past. They find signs of a medieval type civilization, but with anachronisms. Two hundred years later, th

Defiant Agents and Key Out of Time

Published by Thriftbooks.com User , 19 years ago
These are two books from the early 60's that were originally published as Juveniles (current category is known as Young Adult). The Defiant Agents has not worn as well as the second book mainly because it is built around a Cold War inspired race between the US and Russia to colonize space. The thing that really saves this book from being dated though is Norton's distrust of all big government. The US team was sent into space under Redax, a conditioning that returns their thought processes to that of their ancestors-- Apaches living in the late 18th and 19th centuries. Although they were volunteers for experimentation and exploration, they were not made fully aware of what they were going to be used for by their superiors. Consequently, when their space ships cracks up on entry the survivors. some thinking they are living in the past, some more aware of the present are confronted with a puzzle. They must figure out how to survive in an alien world where their neighbors are escapees from the Russian mind control project-- and the Russians want their people back.Key Out of Time moves to the water world of Hawaikan. Ross Murdock, a character from the earlier books, is thrown into the past of this world when a storm blows up while they are setting up a time gate. The Russians are only mentioned in the beginning so the book feels less dated than Defiant Agents. The action here involves a struggle among the ancient people of Hawaikan to escape the influance of the mysterious aliens whose wrecked ship provided the technology that let the people of Earth reach into space. These books are well worth reading. Individually I gave Defiant Agents a 4 and Key Out of Time a 5. The first one was pulled down by the Russian/US conflict that probably doesn't resonate with current attitude toward the Russians.

A walk down memory lane with this sf omnibus

Published by Thriftbooks.com User , 21 years ago
To gain perspective on when these novellas were released, Kennedy is President and Khrushchev is in power. The first moon walk has not occurred yet and the Mets winning the world Series is several year away when these two classic novellas were released. Both hold up well even with four decades of incredible gains by the scientific and technological communities, and the collapse of the Soviet Union. Some Cold War vestiges may seem outdated, yet nicely fit into the two story lines. "The Defiant Agents". Travis Fox and crew land on planet Topaz where they must reach inside to their Apache heritage to battle a difficult climate and a Russian team of explorers who likewise dig deep into their Mongol heritage. "Key Out of Time". Time Agent Ross Murdock needs to unite three radically different cultures and potential enemies into one force to repel the dangerous invading Baldies. The anthology remains strong and actually shows how the great Andre Norton influenced future science fiction authors. Tales like these are why she remains one of the best loved writers of the twentieth century and now the twenty-first century.Harriet Klausner
Trustpilot
Copyright © 2022 Thriftbooks.com Terms of Use | Privacy Policy | Do Not Sell My Personal Information | Accessibility Statement
ThriftBooks® and the ThriftBooks® logo are registered trademarks of Thrift Books Global, LLC