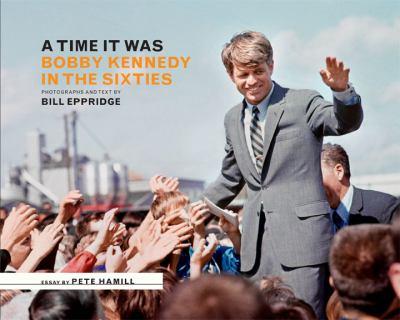 A Time it Was: Bobby Kennedy in the Sixties

by Bill Eppridge and Pete Hammill

On June 6, 1968, at the age of 42 and at the height of his popularity, Robert F. Kennedy was tragically assassinated. Presidential candidate, U.S. Senator, father--Kennedy was all of these things--and, to many Americans, he embodied the power of possibility and positive change during a period of social unrest, racial inequality, and war. ? Renowned Life photographer Bill Eppridge followed and photographed Kennedy during his early campaign days up...

Published by Thriftbooks.com User , 14 years ago
Bill Eppridge's skillful photography combined with his eloquent text makes for a superb photojournalistic book on Bobby Kennedy. The pictures in the book are extraordinarily unique and truly new for many of us to see - as the pictures provide a critical insight to the kind of man Bobby was, and not just the politician Bobby. This is the kind of book that one can peruse countless times and still feel inspired by the extremely rich quality of photojournalism. Highly recommended for all who have a passion or interest in Bobby Kennedy, political campaigning, the 1960's, and photography.

Published by Thriftbooks.com User , 14 years ago
I've heard it said, that with Bobby, you really had to be there. I'm one who was, and to a large extent, that's true. It's hard to put into words what we all felt in those times, especially 1968, the worst year I ever remember. But the images in this book, go a long way toward giving the reader a feel for what it was like in those tumultuous days. For those of us who lived it, and lived through it, they are a heartbreaking reminder of what we lost, (can it be?) forty years ago. The title comes from a Paul Simon song, "Old Friends." It was played at the end of the TV coverage of Bobby's funeral. I'll never forget it. Time it was, and what a time it was, It was...a time of innocence, a time of confidences. Long ago, it must be... I have a photograph. Preserve your memories. They're all that's left you.

Published by Thriftbooks.com User , 14 years ago
The first actual memory I have is sitting at the foot of my parent's bed watching RFK's funeral on TV. I was 5 and I had made a little matchbox car motorcade with a flag draped box for a hearse. So maybe this moment in history, which I have subsequently learned more about, might color my review a bit. The pictures are really beautiful and I don't recall seeing many of them before. The accompanying narrative is very well done and offers insights to the RFK moment. I am a big Obama fan mainly because I feel he brings the energy and imagination that was promised by RFK. If you want a very good book about an inspiring man and a once in a generation moment get this.

A must-have for aficionados of photography.

Published by Thriftbooks.com User , 14 years ago
On the surface, 'A Time It Was' may seem like yet another book about the Kennedys. It is most definitely not. The book is the story of Bill Eppridge, the photographer who took *the* famous shot of a grief-stricken busboy holding Robert Kennedy as he bled to death on a kitchen floor. It's a hauntingly beautiful picture. In fact, it's impossible not to get lost in it: What could have been going on in the minds of a dying Senator and a startled busboy as bedlam unfolded? Do their eyes reveal anything? If so, what do they tell us? These are questions that have probably been asked a million times and answered in a just as many ways. But what about the photographer? It's easy to forget him. You see things unfold through his eyes, but you don't see him. Yet, this is someone who, in the chaos of an assassination, had enough wits about him to make a picture. In Eppridge's case, he didn't just make a picture. He made one of the most searing images of the 20th century. 'A Time It Was' reveals how this historic photo got made. But it also reminds us that Eppridge made all kinds of pictures (as opposed to just taking them)--and they are bold and graceful, subtle and extravagant, gritty and funny. The book isn't just a salute to RFK, its one man's tribute to the art of photojournalism, in circumstances full of pomp and tragedy. And anyone interested in photography would do well by picking it up.

Published by Thriftbooks.com User , 14 years ago
If there ever was a time our country needs to look back in history for help, it certainly is now. This book captures that time. Great insight from a photographer seldom seen today in a presidential campaign. It will make you smile, it will make you cry.
Trustpilot
Copyright © 2022 Thriftbooks.com Terms of Use | Privacy Policy | Do Not Sell or Share My Personal Information | Accessibility Statement
ThriftBooks® and the ThriftBooks® logo are registered trademarks of Thrift Books Global, LLC