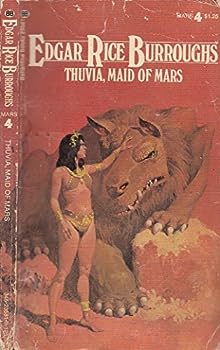 (Book #4 in the Barsoom Series)

This description may be from another edition of this product. Mars has become divided by love. Not one, but two princes and a Jeddak are vying for the love of Thuvia of Ptarth. When she is mysteriously kidnapped, treachery threatens to throw Barsoom into bloody...

The focus of the novel

Published by Thriftbooks.com User , 11 years ago
In this novel the focus shifts from John Carter, Warlord of Mars, and Dejah Thoris of Helium, protagonists of the first three books in the series, to their son, Carthoris, prince of Helium, and Thuvia, princess of Ptarth. Helium and Ptarth are both prominent Barsoomian city state/empires, and both Carthoris and Thuvia were secondary characters in the previous novel. (From Source: Wikipedia).

Published by Thriftbooks.com User , 11 years ago
Thuvia, Maid of Mars is a science fiction novel by Edgar Rice Burroughs, the fourth of the Barsoom series. The principal characters are the Son of John Carter of Mars, Carthoris, and Thuvia of Ptarth, each of whom appeared in the previous two novels. (From Source: Wikipedia).

One of the Better Mars Books

Published by Thriftbooks.com User , 20 years ago
More similar in its simplicity to a Princess of Mars than Gods/Warlord. John Carter's son engages in search for abducted Thuvia, while he remains the prime suspect in her abduction. Usual strange meetings and stranger neighborhoods, but this story is a little less frenentic than Gods/Warlord, and both Carthoris and Thuvia are solid characters.

Outstanding, although not as good as it's prequels

Published by Thriftbooks.com User , 21 years ago
It's hard to describe the fulfillment one feels after reading anyone of the books in Burrough's series. The complete dominance of honor, and the constant heroism and adventure in these books is heart warming, as well as thrilling. In this part of the series, somewhat to my dissappointment, John Carter is no longer telling the story, but his son, Carthoris, is. Readers of the first three books don't be alarmed however! Carthoris is "just as good a story teller as his father." And the story is just as exciting.
Copyright © 2020 Thriftbooks.com Terms of Use | Privacy Policy | Do Not Sell My Personal Information | Accessibility Statement
ThriftBooks® and the ThriftBooks® logo are registered trademarks of Thrift Books Global, LLC