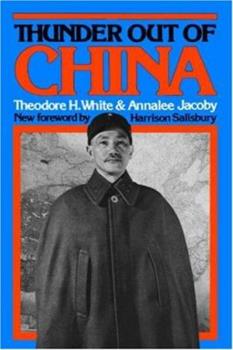 Thunder Out of China

From the first outbreak of hostilities in northern China in 1937 to the Japanese surrender aboard the U.S.S. Missouri in 1945, this book re-creates the decade of upheaval when China was caught in the grip of revolution and war and torn from its feudal past. The authors Time-Life correspondents during the war years, report firsthand on the rise and fall of the Kuomintang nationalist government and its leader, Chiang Kaishek, who ironically misunderstood...

Published by Thriftbooks.com User , 12 years ago
Lets start with the technical stuff first. This book is very well written, covers a wide variety of angles, and is easy to read. You will come away from it with a much better understanding of the time period, but Jacoby and White inject a lot of flavor, making this an invaluable historical narrative void of dusty facts and bland language. What really stands out in "Thunder Out of China" is its political implications. I felt it was rather non-biased, but the authors do seem to be building up to the conclusion that Nationalist China never stood a chance after the War was over. What was a shakey regime prior to the Japanese invasion is all but toppled because of the inept abilities of the Nationalists to provide for their people and fight the Japanese rather than let personal loyalties and greed dictate their actions. While the Nationalists waste away, their counterparts in Red territory only become stronger and stronger, till they reach the point that they are capable of waging war against the Nationalists, only this time, without Soviet interferance, and with broad support from the peasant population. What you will pull away from this book is not nessisarily choosing a side to agree with, and concluding good or evil, but rather the notion in China that when it comes to ruling a country with as much ground and as many people as China has, might is right, and the prize goes to the one capable of holding it all together.

Published by Thriftbooks.com User , 15 years ago
This is an interesting narrative of China at the end of World War II and start of civil war by TIME Magazine correspondents Annalee Jacoby (1916-2002) and Theodore H. White (1915-1986). With their sympathies focused on the long-suffering Chinese populace, the authors show the political realities of that troubled land. Readers see how the Nationalist government of Chiang Kai-shek was beset by corruption, cruelty and incompetence. These problems contributed to disasters like famine in Henan Province, and led many to side with Mao's Communists. The authors also relate such events as the sacking of General Joe Stillwell, and the listless Nationalist opposition to the invading Japanese. By honestly reporting Nationalist incompetence and the possibility of a communist takeover (as happened in 1949), the authors soon found themselves in hot water. TIME publisher Henry Luce fired White for refusing to heed Luce's party line, and both authors were later accused of having helped "lose" China to the Reds. Theodore White went on to a stellar career as a U.S. political writer with his superb MAKING OF THE PRESIDENT series, while Jacoby married author and media personality Clifton Fadiman. This is a worthy and realistic narrative, although not quite up the standards of most of White's later books.

Great Book for a Look at China Past and Present

Published by Thriftbooks.com User , 15 years ago
I came across this book while going through a box of my grandmother's old books. What a find! As a student of Asian History, I found it fascinating and can't believe that I never read this while majoring in Asian Studies (shame on you San Diego State!). It is very well written and a true asset to anyone studying China's past and what lead up to the Coummunist revolt.

A great book with a WWII contemporary viewpoint

Published by Thriftbooks.com User , 18 years ago
I first encountered Thunder Out of China in the late 1960s after Lin Yutang caused me to have a yearning to know more about the China of the early 20th Century. Theodore White was one of my early reads. Because of the rabid anti-communism of the times I found myself wondering how White managed to keep himself out of the clutches of the House UnAmerican Activities Committee, writing such things. This book was responsible for the historical amoeba of WWII gradually spreading through my life for several years. Read it. This is a side of WWII, Mao, Chang, Vinegar Joe Stillwell from personal acquaintance and observation, you won't get anywhere else.

Published by Thriftbooks.com User , 21 years ago
White and Jacoby, both correspondants for Time Magazine during WW2 and its aftermath, provide an insider's portrayal of China's convoluted mechanisms of governence. While other contemporary accounts are mostly small in their scope, and unapologetically biased towards either the Communists or the Nationalists, Thunder Out of China is brutally fair, sympathetic to the Nationalists while exposing their corruption, and detailing the incompentence of the American intervention which resulted in a resumption of the disasterous civil war 1945-1949. The book covers such disasters as the Hunan famine, the farce of Chinese "resistance" to the Japanese invaders, the recalcitrant corruption and conservatism of the Nationalist leaders, and the sacking of Stillwell. Snow's Red Star Over China may be more readable, but it's chatty, personal, pro-Red, and semi-fictionalized account is much less revealing historically than Thunder Out of China. Time was unapologetically, even fanatically, supportive of the Chiang Kai-shek regime, and the magazine's propaganda in the US explains much of America's distastrous intervention (read China Hands for more on this). White and Jacoby used this book to expose much of what their employer wouldn't let them say, and it remains one of the best accounts written of wartime China.
Trustpilot
Copyright © 2022 Thriftbooks.com Terms of Use | Privacy Policy | Do Not Sell or Share My Personal Information | Accessibility Statement
ThriftBooks® and the ThriftBooks® logo are registered trademarks of Thrift Books Global, LLC