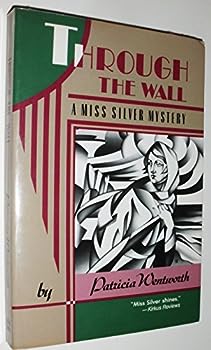 Through the Wall (A Miss Silver Mystery)

This description may be from another edition of this product. Governess-turned-sleuth Miss Silver takes on a murder case involving a surprise inheritance and a feuding family. Martin Brand always had a dark sense of humor. Surrounded by relatives he despised, he...

Music and murder at the seaside

Published by Thriftbooks.com User , 19 years ago
The 'wall' in question refers to the Brand family home in Ledshire, originally two separate houses side-by-side that were knocked into one several generations back for a patriarch with a tribe of children. In this generation, the houses may have to be separated again, as Wentworth delivers the usual clever puzzle, embellished with lifelike characters who enough trouble even without murder in their midst.Martin Brand, wealthy widower with family feeling, had trouble finding a worthy heir. Leaving money out of the family went against his grain, but the pack of spongers he'd acquired (distant cousins - his brother's widow Florence, her son Felix, Florence's sister Cassy) didn't suit. Upon the death of another, estranged brother, he didn't take in his nieces Marian and Ina as still more dependents, but merely kept an anonymous eye on them. Ina didn't impress him (clingy, married to the sponging Cyril), but in hardworking, responsible Marian he found the heiress he sought, although nobody knew it till after his death. While she controls the money otherwise, upon her death half will go to her children, if she ever has any, or failing that, to the Ledshire spongers. If she dies intestate, the remaining half would go to Ina as her closest relative.Tailor-made for murder, yes? Well, as it happens, her first near-death experience just after learning of the inheritance seems entirely accidental - a train crash, in fact, in which she meets the writer Richard Cunningham while both of them are trapped in the wreckage awaiting rescue. Talking to pass the hours until they're freed, they get to know one another very well indeed. But while Cunningham is falling in love with Marian, her new-found relatives tend quite the opposite way.Felix Brand's character defect isn't laziness - he's a professional musician, the accompanist of Helen Adrian. Quite apart from normal bad temper, he's been making a fool of himself over her. If her voice ever gives out, she'll marry money - and Felix hasn't inherited what it would take to buy her. Even if he had the taste to appreciate Penny Remington who loves him, he can't afford marriage.Miss Silver, for once, isn't engaged by a sympathetic character. Helen Adrian approaches her for help in fending off a blackmailer who threatens to tell her rich suitor that she's carrying on with Felix - she suspects Cyril Felton. Miss Silver, rejecting the case, is called on again when Helen encounters Cyril while rehearsing with Felix. When one of the two corpses-waiting-to-happen is found murdered on the beach wearing the other's scarf, was she murdered as herself, or in mistake for the other? Neat touch; to solve this one, the reader must pay heed to evidence rather than motive, because motives are ten a penny here, with Penny's beloved Felix a prime suspect no matter which woman was meant to die. As always, Miss Silver is either guardian or avenging angel, depending on where one stands.

A likeable heroine in an unpleasant household.

Published by Thriftbooks.com User , 21 years ago
Miss Silver does it again, but this time the heroine she's saving from all sorts of evil fates is more worthy than most--kind, sensible, hard-working. She finds herself unexpectedly the owner of a considerable fortune and a house, half of which is inhabited by two of the nastiest women you'd wish to meet.It's the murder that brings Miss Silver in, of course, complete with knitting, trivial conversation, and judgement always correct.
Copyright © 2020 Thriftbooks.com Terms of Use | Privacy Policy | Do Not Sell My Personal Information | Accessibility Statement
ThriftBooks® and the ThriftBooks® logo are registered trademarks of Thrift Books Global, LLC