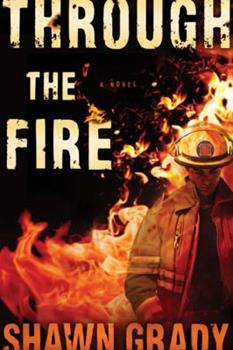 (Book #1 in the First Responders Series)

Firefighting burns in Aidan O'Neill's blood. The son of a fireman, O'Neill has a sixth sense about fire and often takes dangerous risks. When one act of disobedience nearly gets a rookie killed, O'Neill is suspended. His weeks off are supposed to be a time to reflect but instead he escapes to Mexico.

Published by Thriftbooks.com User , 12 years ago
Review by Jill Williamson Firefighting is Aidan O'Neill's life, but his overconfidence puts a rookie's life in danger. Aidan is suspended and goes home to discover that his fiancé is leaving him. Life stinks. But an arsonist is keeping the Reno fire department busy and Aidan gets called back to work. He partners with fire investigator, Julianne, to get to the bottom of this arson case before people start to suspect him. What an impressive book! It was one thing after another for poor Aidan. His life fascinated me. In the perfect example of "write what you know," former firefighter Shawn Grady's characters were flesh and blood. I felt like I was one of the firemen riding on that truck. Both character and plot sucked me in and I couldn't put the book down. (Love that!) Great cover too. I highly recommend this book for anyone who loves a great suspense story (girls, too, even though guys will love the action.)

Published by Thriftbooks.com User , 12 years ago
Shawn Grady has crafted a marvelous debut novel--one that has burned on my mind ever since. "Through the Fire" is a first person novel and after I discovered this I was surprised to find that the book was hot as fire and engaging. I'm not one for realistic fiction, or first person for that matter, but Shawn Grady sucked me into the story. And to be honest, I'm glad he did. I saw the thrilling side of realistic fiction. Aidan is a firefighter in Reno, and he has been given a gift. He has been given the innate ability to sense where a fire is headed. The gift rescues him time and time again, as well as helping him gain the respect of other fighters, but after a fire that went horribly wrong Aidan losses this ability. He flees to Mexico on what should have been a relaxing two weeks. As it turned out, everything went from bad, to worse. Aidan's life begins to crumble, like the walls of the buildings set aflame. His personal life, work life, it all falls. Aidan turns into a broken, lost, man. An arsonist is targeting Reno, burning and burning everything in sight with flames that just don't go out. And it is Aidan's duty to stop him. Buy this book, I mean it. It's well worth your money. "Through the Fire" is just that, a read that feels like it's taking you through a fire. At each moment where I thought I'd figured the story out, Shawn Grady turned things upside down again. This book had more twists than I ever expected. A marvelous book meant to start an even better career. Check this book out, it's good stuff!"

Published by Thriftbooks.com User , 12 years ago
Aiden O'Neill is haunted by his father's death, struggling to hold onto a fizzling relationship with his fiance, and fearing that he has lost his sixth sense for fighting fires. When a careless move almost causes a rookie's death, Aiden's life seems to crumble around him--until a series of fires terrorizes the city of Reno. Could there be a connection between the arson and his father's tragic end? Reno firefighter and debut novelist Shawn Grady weaves a fast-paced story of dedication, courage, mystery, and God's ability to bring answers. As a citizen of Reno I enjoyed seeing familiar locations pop up on the page. But you need not be a local to enjoy this story. Most of all I got caught in the author's amazing gift for words, characters, and bringing the reality of fighting fires to life through a plot that often left me wondering if I could have my son make dinner just one more time. It's hard to belief this is a first novel.

Published by Thriftbooks.com User , 12 years ago
THROUGH THE FIRE opens with Aidan O'Neill, a Reno firefighter, struggling with the loss of his father, who was also a Reno fireman. Then Aidan's reckless confidence nearly kills the rookie assigned to him. Then his fiancee leaves him. And then, to top it off, an expert arsonist begins terrorizing the city. That may sound like a paint-by-numbers summer read. But it isn't. Shawn Grady takes several familiar plot elements and shapes them into a new and powerful story. This book earns five stars because of two things: (1) Shawn Grady's strong, lyrical writing and (2) his deep understanding of fire and the men and women who fight it. Look for Grady to have a long career in Christian fiction.

Published by Thriftbooks.com User , 12 years ago
Obviously Grady knows from experience what fighting fires is like, because this exciting book is completely realistic. Reading it is like actually being involved in the action. I was afraid I wouldn't like the book because it would be more of a "guy" thing, but it has character development and just enough romance so women will enjoy it too. The religious aspects are also realistically part of the story and the book is not one of those cram-Jesus-down-the-reader's-throat types at all. It's mainly a thrilling action adventure. Often I figure out mystery plots, but this one kept me guessing until the answer was revealed by the author. I read it all in one evening, because I couldn't put it down.
Trustpilot
Copyright © 2022 Thriftbooks.com Terms of Use | Privacy Policy | Do Not Sell My Personal Information | Accessibility Statement
ThriftBooks® and the ThriftBooks® logo are registered trademarks of Thrift Books Global, LLC