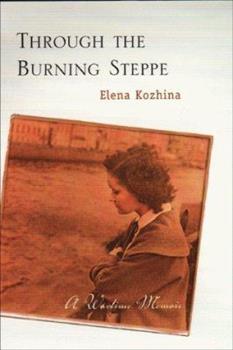 Through the Burning Steppe: A Wartime Memoir

Through the eyes of a young girl comes this wartime memoir--an unforgettable, timeless story of courage, dignity, and a mother's love.When the Germans laid siege to Leningrad in 1942, Elena Kozhina,... This description may be from another edition of this product.

Published by Thriftbooks.com User , 21 years ago
This is a wonderful piece of writing. It is is written in clear and sparkling prose, testimony to the way in which Ms. Kozhina carries on the great Russian literary tradition of such writers as Gorky, Chekov, and Turgenev. The book, in its simplicity, yet power, reminds me of that great French movie, "Forbidden Games", about children orphaned during World War II. Time after time, as I read through the book, I would stop and look at the picture of the author; in a way I was unable to believe that one could go through such terrible times as she describes, and yet still survive with such great depths of humanity. This is literature at its very best!

A gem - on many levels

Published by Thriftbooks.com User , 22 years ago
Elena Kozhina's Through the Burning Steppe: A Wartime Memoir is so much more than a highly compelling narrative of the horrors and heroism experienced by a young Russian girl and her mother during World War II. It is also a revealing glimpse into the realities of life in the Soviet Union, not just during the war, but from its earliest years to its final decade. It is a chronicle of a young person's growing literary, artistic and cultural awareness. And it is, ultimately, a timeless story - not simply of good and evil, or of simple joys amid enormous tragedy, but also of human frailties and strengths, of ruthlessness and compassion, of islands of clarity in a sea of complexity. This gem of a book packs volumes of interest - and of insight - into its fewer than 200 beautifully written pages. I recommend it highly.
Trustpilot
Copyright © 2022 Thriftbooks.com Terms of Use | Privacy Policy | Do Not Sell My Personal Information | Accessibility Statement
ThriftBooks® and the ThriftBooks® logo are registered trademarks of Thrift Books Global, LLC