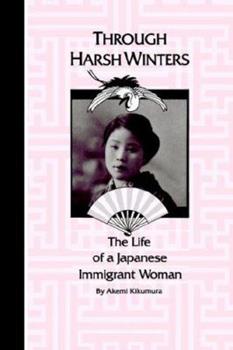 Through Harsh Winters: The Life of a Japanese Immigrant Woman

A moving book about the life of a Japanese immigrant family. This description may be from another edition of this product.

If you think they had it easy

Published by Thriftbooks.com User , 14 years ago
This modest, moving book is the best (powerful, readable, closely observed) single saga I've found of the life of a Japanese immigrant family. Japanese Americans might seem so successful today that it's hard to imagine what they went through as immigrants as late as the 1940s. And it's not just about internment camps in World War II. It's more about things like laws that prohibited Japanese from ever becoming American citizens or owning farmland in California. Which isn't to say this book is basically about social injustice. It's much more complex and honest than that. It's as much about all the predictable crazy ways people will shoot themselves in the foot if someone else hasn't already shot them there. It's about America as the product of millions of dreams gone so wildly wrong that, if they knew how it was going to end up, they probably would have stayed home. But they came, were stuck, struggled, hung on. And somehow, the next generation grew, struggled too, and found that this country is home. Take Me With You When You GoNutty to Meet You! Dr. Peanut Book #1

Published by Thriftbooks.com User , 22 years ago
This is an excellent book!
Trustpilot
Copyright © 2022 Thriftbooks.com Terms of Use | Privacy Policy | Do Not Sell My Personal Information | Cookie Preferences | Accessibility Statement
ThriftBooks® and the ThriftBooks® logo are registered trademarks of Thrift Books Global, LLC