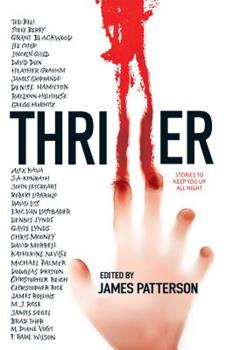 Thriller: Stories to Keep You Up All Night

Featuring North America's foremost thriller authors, Thriller is the first collection of pure thriller stories ever published. Offering up heart-pumping tales of suspense in all its guises are thirty-two of the most critically acclaimed and award-winning names in the business. From the signature characters that made such authors as David Morrell and John Lescroart famous to four of the hottest new voices in the genre, this blockbuster will tantalize...

Published by Monica , 3 years ago
Each story has a twist that you don't expect

Published by Thriftbooks.com User , 13 years ago
James Patterson does an intro to each story about the author and where the author got the idea for it. There wasn't one story not worth the read. This is an excellent compilation - I hope there are more to follow.

Thrilled to have this one available

Published by Thriftbooks.com User , 15 years ago
There are a few reasons you should read this book. First, it is likely you will get a taste of the writings of authors you otherwise would not have ever tried. Second, there are variations here on what defines a "thriller." Don't be prejudiced by your own definition of the term -- read these with an open mind to possibilities. Third, if your life is as hectic as mine, it is great to be able to dip in for 20 or 30 minutes and enjoying a complete quality story; there are many of them in this collection. Finally, many reviewers here write about how the collection was weak except for... and then they name the few stories they think were best. Peruse the reviews and you will see they are not all the same few stories... all in all, most of the stories were enjoyed by someone here! Which is to say that the lower ratings are because of TASTE, not QUALITY. Enjoy the breadth, indulge in your favorites, and don't be deterred by the selective ratings of the reviewers here. A quality anthology -- can't wait for Vol 2!!

Published by Thriftbooks.com User , 16 years ago
This collection of short stories was very impressive.You have a very impressive gathering of noted authors.You also have every type of story that you could hope to read.Within this book there are spy thrillers,police stories,medical stories,military thrillers,as well as mystery stories. I was also intorduced to several authors that I had never before read.Heather Graham,Lee Child,Gayle Lynds,James Seigel, Steve Berry , Alex Kava, and David and Michael Palmer mightily impressed me.Gayle Lynd's story"The Hunt For Dimitri" and Heather Graham's "A Face In The Window" were definitely keepers. This book also featured authors that I have been reading for years.Brad Thor,Grant Blackwood,Christopher Reich,Gregg Hurwitz, and David Morrell also shined in this book . "Sacrificial Lion" by Grant Blackwood and "The Athens Solution" wre also standouts.Also in the story "Abelard Sanction" David Morrell gave us an update on Saul Grisman a hero from previous novels. This is a very good that I enjoyed reading.You will find it to be a page turner.

An astounding work of short fiction

Published by Thriftbooks.com User , 16 years ago
THRILLER, an anthology of short fiction --- where all contributions are from members of the International Thriller Writers Organization --- is, if you will, a literary annual report, a statement of where the thriller genre is at the present time and where it is going. In concept and execution, it's nothing less than perfect: 30 stories from 32 authors, the majority of which has never seen publication before. Together, they create an exhaustive compendium of the breadth and range of the subject matter and the depth of literary talent with which the genre is presently blessed. When I think of the thriller genre, I generally think of works like David Morrell's FIRST BLOOD, Douglas Preston and Lincoln Child's THE RELIC, or literally anything Robert Ludlum ever wrote. The genre does not immediately or easily lend itself to shorter fiction. Yet each and every offering here illustrates what makes a thriller a thriller. The stories themselves simultaneously serve as an introduction to new readers while providing additional exploits to the canons of familiar characters. Lee Child's "James Penney's New Identity" is an excellent example of this. Heretofore published with only very limited distribution, it includes a brief but pivotal appearance by Child's Jack Reacher. Readers unfamiliar with Reacher will find their appetites whetted for more, while fans of the enigmatic wanderer will enjoy the novelty of a story in which their protagonist is relegated to a supporting role. J. A. Konrath, on the other hand, uses "Epitaph" as a vehicle for Phin Troutt, a secondary character in his fine Jack Daniels series, not only shifting primary characters but also mood in this dark tale of double-barreled revenge. Preston and Child, writing their first short story together (amazingly enough), have contributed "Gone Fishing." It serves as a solo tale for Vincent D'Agosta, usually seen in the company of Special Agent Pendergast. D'Agosta does quite nicely on his own in this chilling story that begins, simply enough, with the investigation of the theft of a rare artifact and ends...well, you'll have to read it to find out. Obviously, it's difficult to pick a winner in a collection stuffed to the rafters with them. Stalwart authors such as David Morrell, Gayle Lynds and Eric Van Lustbader are featured; a long out-of-print, posthumous contribution from dearly-missed Dennis Lynds is included, as is "Man Catch," an unsettling tale of jealousy, betrayal and revenge from Christopher Rice. There are diverse, exciting stories from Chris Mooney, Alex Kava, Grant Blackwood and Brad Thor --- the work of these and other authors makes picking a favorite almost an impossibility. If I had to pick one, however, it would be "The Portal" by John Lescroart and M.J. Rose. Lescroart and Rose normally fly solo, a state of affairs that makes the product of this collaboration --- a seamless, tightly drawn tale where things go from bad to awful --- all the more noteworthy. Rose's Dr. Morgan Sn

Published by Thriftbooks.com User , 16 years ago
This anthology is faster than hyperspeed as each of the thirty contributions are well written thrillers using the definition provided by James Patterson in his introduction to the book as being "the force with which they hurtle the reader along." The tales run the gamut of what most readers consider a thriller though some seem more like a detective story. Included are legal, espionage, adventure, medical, police procedural (mystery genre?), romance, historical, high tech, political, religious and military, etc. The authors are the who's who superstars of the genre though some are probably more renowned as mystery writers as the line of demarcation seems blurred. What is fascinating is that several authors are females which were virtually unheard of just a decade or so ago. The introduction to each tale showcases how talented Mr. Patterson is while the short stories display the skills of the author. Fans will appreciate this fine compilation, the first by the newly formed International Thriller Writers group, which lives up to its subtitle: "Stories to Keep You up All Night"; this compilation will do so for several evenings. Harriet Klausner
Trustpilot
Copyright © 2022 Thriftbooks.com Terms of Use | Privacy Policy | Do Not Sell My Personal Information | Cookie Preferences | Accessibility Statement
ThriftBooks® and the ThriftBooks® logo are registered trademarks of Thrift Books Global, LLC